Elvis the Movie at the Stella Rathmines 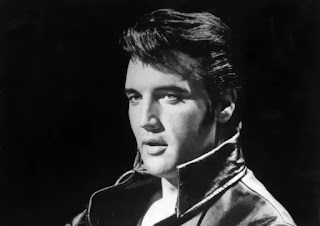 Rathmines is a long way from Dalkey so I hadn’t been at the new-dangled Stella since its refurbishment. My local was the much lamented Forum Glasthule with its perennially sticky floor.  I have to report the Stella is mighty fine. It’s comfortable (we had a couch) the service is great, and you can enjoy a drink in an actual glass while watching the film.. However, they need to get rid of those godawful chi-chi lamps.

Elvis the Movie was disappointing. I first heard Elvis when I was standing outside a record hop at the Collins Tennis Club in 1958. The record was I Got Stung – the last record he released as a 78. The classic One Night was on the A-side – but I was struck by the pure energy of the B-side. He disappointed our rebel aspirations by entering the army and doing all those appalling films but his early records and occasional emerging into the light (especially the Memphis Sessions – check out After Loving You, Suspicious Minds and In the Ghetto) secured his place in my affections. The heritage was safe and solid despite the tawdry later years in Las Vegas.

The definitive biography of Elvis is Peter Guralnick’s highly readable two-volume classic:  Last Train to Memphis and Careless Love. Reading them you realise that despite the extra-terrestrial glamour, the gorgeous voice and the universal adulation, Elvis was a simple country-boy with a fatal lack of moral courage. His biggest sin was to allow himself to be separated from his musical peers (such as Scotty Moore and Bill Black) and became the thing of a fairground hustler - Colonel Tom Parker. Cheesy merchandise a speciality. No colonel, no Tom and not even a Parker. The movie touches on this aspect of his life but it fails absolutely at giving us a more complete and complex account – it was all flash, bang, wallop accompanied by some serious ham from Tom Hanks. And even then we never got to hear one full song – one demonstration of Elvis at his prime. The corny use of Suspicious Minds to hammer home the message that Elvis was been hustled by Parker and Las Vegas villains was trite in the extreme. The guy playing Elvis gave an excellent imitation of the man and look out for a wonderful Little Richard cameo. Elvis the Movie is a mildly entertaining show-biz confection but didn’t come close to capturing the tragic trajectory of the man’s life. Nor did it want to do so.

My Times at the Sunday Times – A Valediction Forbidding Mourning 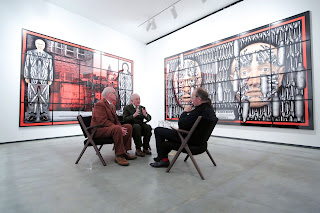 I was saddened but not surprised to hear of the recent cull at the Times and Sunday Times Ireland. Say what you like about Rupert Murdoch (and there’s much to say), the Sunday Times was the only serious English newspaper with an Irish edition that gave extensive coverage to Irish news, sport and culture. Pick up the Observer, for example, and there’s nary a word about us unless the DUP are acting up again.

I was very happy to have been offered an opportunity by associate editor John Burns to air my views on art, literature, and even my personal dramas (that root-canal treatment, those TB days) for nearly 12 years. This purge seems to be getting rid of some of its most-talented writers, leaving it much diminished. In addition to John Burns (an award-winning writer on culture), I rated Denis Walsh as one of the best sports journalists in the country and Justine McCarthy supplied an acerbic and articulate left-of-centre perspective on politics. Maybe a tad too left for Rupert’s taste. Mark Tighe, author of that brilliant and painstaking exposure of John Delaney’s machinations at the FAI, had already left. All it needs now is to let Liam Fay go and there will be no incentive to buy it ever again.

Irish art gets scant coverage in print and the Sunday Times Culture magazine was one of the few places where artists’ work was regularly reviewed. Let’s hope it continues to employ the services of the estimable Cristín Leach in this area – a stern judge who has ruffled a few feathers in her day. While journalism doesn’t pay handsomely, especially arts journalism, it is hugely rewarding in other ways. I cherish many delightful memories of my stint there. I travelled around the country interviewing such luminaries as Basil Blackshaw, Sean MacSweeny, and that great Cork maverick Maurice Desmond. My favourite encounter was with Gilbert & George in the Mac Belfast. Sporting their new Donegal Tweed suits (they had eschewed Harris Tweed because of Brexit), they were by turns hilarious and outrageous. Despite being gay, they strongly disapproved of gay marriage – maintaining that it was bourgeois and that gay men should be sexual adventurers (quoting John Rechy). While all my art writing was received with nothing but gratitude, my book reviewing frequently exposed me to tirades of Twitter abuse. One female writer of light-weight fiction unleashed an army of her trolls (male and female) on me for deviating, minutely, from rigorous wokeness. At least the late, and much lamented, Eileen Battersby had the grace, albeit via her agent, to write a letter to the paper challenging my views on the clearly autobiographical character in her novel. The Speakeasy section of the Sunday Times (long discontinued) allowed writers to indulge in personal stories so I was able to horrify my Cork-based siblings with revelations about child-hood episodes such as my incarceration for a year in a sanatorium in Foynes and an episode in the Dental Hospital in Cork that far outdid Laurence Olivier’s dental antics in the film Marathon Man.

What fun it all was. 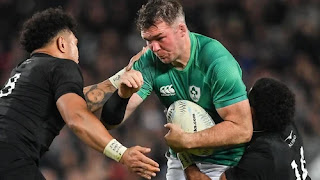 What a weekend for those who, in a world that’s falling apart, cherish the engaging distractions of sport. That epic in New Zealand, the sad sight of Rory McIlroy not collapsing, but failing to rise to the occasion. And not least the skill and passion of Limerick and Kilkenny at Croke Park.

I watched the Ireland-New Zealand match on my own in a house in Bayswater while my hospitable nephew followed his Saturday routine of sleeping in after a hard week at the helm of a financial institution. It didn’t stop me shouting and roaring while texting my rugby Signal group the while. I have been watching rugby since Jack Kyle played out-half for Ireland, served at scrum-half by John O’Meara and then  Andy Mulligan. (Kyle told me many years later, when I asked him which he preferred playing with, that Andy took the pressure off him by making the breaks himself, while the length of John’s pass meant he had more space.)  I’ve seen Ollie Campbell’s inspired Triple Crown performance against Scotland and Michael Kiernan’s late drop goal against England. I watched in horror as Ireland threw away a World-Cup quarter final against Australia at Landsdowne Road – hang down down your head Rob Saunders, hang down your head Jack Clarke. And I listened in from a roof-top in Havana as Ronan O’Gara dropped that goal that gave us our first Grand Slam since Jack Kyle’s day in 1949. However, the match last Saturday was surely Irish rugby’s finest hour. Every man jack of them contrived to have the game of his life - even the occasionally flakey (especially defensively) James Lowe. His left boot proved a lethal weapon in our arsenal. While pundits focus on the way we obliterated New Zealand in the first half, I’d prefer to point to the character the team showed by not panicking when they were pulled back to a three-point difference. There they showed the grace under extreme pressure that was often lacking in the past. What a climax for that great old war horse O’Mahoney, and what a resurrection for Tadgh Beirne after his dismal early career. And what a show from the seemingly ageless Sexton. We have never seen the All-Blacks so put down.

Rory, oh Rory what have you done. Four clear of the field (apart from the quickly fading Hovland) on a benign day at St. Andrew’s – the stage was set for you to finally end your major drought. You hardly missed a drive all day and you produced some magnificent iron shots – albeit never quite getting them into easy birdie territory. However, it was your old Achilles Heel let you down – your putting. You didn’t sink a single long putt in the entire round. Nor did you miss any short ones mind you. But to be a champion you need to produce the odd piece of magic – as Woods, or Nicklaus or Ballesteros did in their prime. You plodded around conservatively, like a latter day Nick Faldo, and unlike Faldo your conservatism was punished by an astonishing display of virtuoso putting by the relative rookie Cameron Smith. You didn’t lose it, you hardly made a mistake, but Smith won it by performing best when the occasion demanded. That will hurt – even unto your death bed.

I have a problem with Kilkenny – I do confess it. And especially with Cody’s round-head regime. I hated their hard-chaw physicality and their cynicism, allied it must be said to the sublime skills of the peerless Henry Sheflin. That master of the dark arts Tommy Walsh (the judicious push in the back a speciality) epitomised their approach to the game. Their glory days overlapped with one of the better Tipperary teams of the last 50 years, and it was only towards the latter stages of the decade that the Tipp cavaliers learned their lesson – giving them two good hammerings in 2016 and 2019 to make up a little for the two they left behind earlier in the decade. There was a time when Cork were our bete noir but for the past 15 years they have been more to be pitied than feared. So I was by no means neutral watching the final last Sunday. While still being ambivalent about the tax-dodger subsidised Limerick, I assuredly wanted them to win. Cody cannot be beaten too often or too hard for my liking. Bitter moi? Anyway it was an outstanding final, fast-flowing, sporting and astonishingly skilful. And of course great drama too. T.J. Reid is no mean Sheflin stand-in and the Kilkenny team stood shoulder to shoulder with this outstanding Limerick side. Cody has renounced his brute pragmatism and joined the cavaliers. Now please retire.

The Basic Income for the Arts Scheme

A few acid drops on this scheme - published in Phoenix last month. 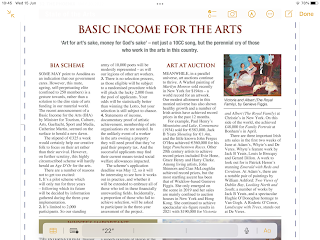 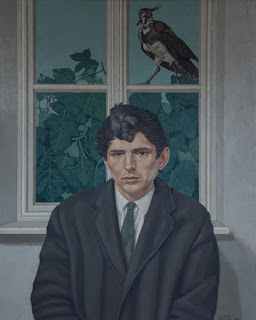 When doing my quarterly art at auction preview for the Irish Arts Review, I wasn’t aware (because of deadlines) of Edward McGuire’s portrait of Michael Hartnett on offer at Adam’s June 1st auction. This is an outstanding work by an artist who has been described (by Brian Fallon) as Ireland’s finest portraitist since John Butler Yeats. We all know McGuire’s striking portrait of Seamus Heaney – housed in the Ulster Museum. The portraits have McGuire’s ubiquitous birds in common but they capture very different moods and personalities. We see the young, confident Heaney sitting four-square - eyeing us frank and free. A man going places. The Hartnett portrait captures a very different mood.. We see a diffidence here and the sadness and furtive melancholy of a man whose life was blighted in later years by marital discord and alcoholism. However,  the sensitive, evocative and pointed poetry lives on. Such a fine poet. Such a fine painting.