This review first appeared in the Sunday Times Culture magazine on the 14th August 2016.

The Catherine Hammond Gallery has moved from Glengarrif to the centre of Skibbereen - just down the road from the great corten steel hulk that is the West Cork Arts Centre. Its dedication to work of the highest quality continues. The inner gallery currently contains paintings by Michael Canning, Martin Gale, Stephen Lawlor, John Doherty, and Donald Teskey. The main gallery features an impressive new show by Carol Hodder - who has shown at the RHA, RUA and the RA and who won a prize last year at NOA, the UK's largest open submission exhibition. Although the title of the show is Shorelines these are not landscapes or seascapes in any conventional sense. They are inspired by the real world but they push beyond it towards abstraction resulting in work that seems more metaphysical than physical. Many, such as Evening Shoreline (above), capture that elegiac mood when the light is fading and the divisions between land, sea and sky begin to blur. The predominant darkness of the work is relieved by a positively Turneresque use of light and by dramatic splashes of rich colour, mostly yellows and reds. These powerfully atmospheric and expressive works invite contemplation rather then mere viewing. 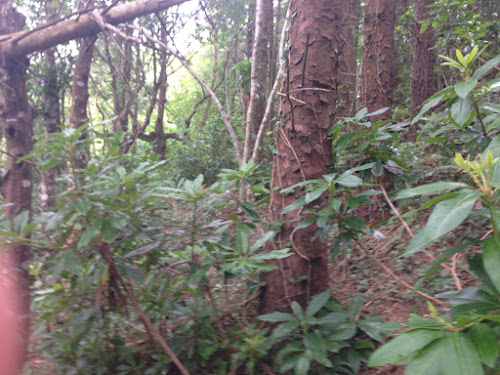 Alone all alone with my dogs In Reen, a couple of miles of bad road from Union Hall - that poor relation of prosperous Glandore. Out on my peninsula there's little scope for a decent walk - any alluring path crosses fields containing sheep or cattle - and probably a farmer with a loaded gun after that incident in Kerry recently. So I head off looking for a suitable location to get a brisk hour in - the minimum for this man and his beasts. The Drombeg Stone Circle beyond Glandore sounds promising so we head there first. It's a perfectly acceptable stone circle with lots of attendant stones and a fine location on the side of a hill. There's additional amusement to be had listening to the Germans trying to separate the Irish from the English on an information board that clearly hadn't had a usability test. We speculate a little on what those guys got up to 3,000 years ago and move on - our walking urge unsated.

Heading south towards Castletownshend I happen on a sign for Rineen Forest and park in the spacious but totally empty car park. A path leads from the car park into the forest so me and my intrepid hounds head off boldly - me swinging my gentleman from Gascony type walking stick (with its hidden extras). While attending to my rich inner life I simultaneously note things on my path. To my right, down a very steep incline is an Atlantic inlet with the tide fully in. Here an uprooted true, there two unfeasibly large dog turds. I come upon occasional small stone pyramids in the middle of the path: one with arrows going in three different directions, another suggesting P Run - ambiguous that. On I stride blithely. After about 20 minutes there was a fork in the path, one way was downhill towards the sea and the other further in to the forest. I took the latter. The path gradually narrowed but was still quite discernible for a another 10 minutes or so. Then I came to a dead end but noticed a smaller route uphill through the tress. Off I went - slower now clambering over fallen trees and up slopes that involved more climbing than walking. My breath came in short pants. I wondered what my cardiologist would think. The path suddenly seemed to peter out but I kept on - following traces of paths here and there hoping I might come upon a substantial trail or even happen on the car park - as I seemed to be heading in that general direction. I went left, I went right, I went up, I went down but no sign of any significant path. Before long I realised that I was completely lost. The woods were getting denser, the terrain more difficult, and I was unsure of how I could retrace my steps. I was now getting alarmed thinking that if I twisted an ankle I could be in trouble - images arose of my mouldering corpse found flanked by my faithful dogs. Shyla, the more sensitive of my two animals seemed to pick up on my anxiety as she began emitting the occasional whine. Missy strode on treating my plight with lady-like disdain. After wandering around for a while I glimpsed a field over to the right and thought I could get in there, find the gate, and be delivered. It meant fighting my way through brambles and rough terrain but I eventually reached the perimeter of the field and espied some comforting farm machinery in one corner. However the fence was about four feet high and electrified - and the wire mesh was such that the dogs couldn't squeeze underneath. Also, there was evidence of sheep wool on the wire so I wouldn't have risked it even if I could have got them in. I was sweating freely now and remembering creepy scenes from the Prelude where the boy (young Wordsworth) was lost in the woods and he felt that the thorns and branches were hostile nature clawing at him - the down side of Pantheism.

I began to toy with the idea of rescue at this stage but my mobile phone declared No Service. Also, I would rather perish than be the subject of an item on the news suggesting that I got lost on a routine walk. It's just me and nature - and my hapless dogs. I got a grip on myself and decided that the only way was back - trying to retrace my steps. I'd been walking more than an hour, and was soaked in sweat but there was no other way. I knew that the sea should be on my left and that I should be about half way up the hill. After a few desperate minutes I spotted the sea below. Back I went slowly and painstakingly all the while keeping panic at bay and the sea to my left.. After a while I lucked upon a discernible path then one of the little pyramids. A little later I passed the great uprooted tree and eventually the comforting sight of the unfeasibly large dog turds. Looking ahead I saw my roof rack peering over the bushes. Deliverance.

Posted with Blogsy
Posted by Ardmayle at 11:07 AM

I do like to take umbrage so maybe that's why I regularly turn on Newstalk in the early evening despite my antipathy towards George Hook: saloon-bar bore and tireless be-labourer of hobby-horses (refugees, Sinn Fein, abortion etc.). But now he's gone elsewhere, to a time slot where thankfully I shall never encounter him again and Newstalk has a nice, lightweight lad called Simon Delaney in his place. Perhaps he's a summer sub rather than the permanent new host - I don't know. Anyway things have not improved. This evening he had some financial type on called Jill Kerby. In the course of a discussion about a new phone banking initiative she opined that older folk only used their iPads and smart phones to access photos of their grandchildren and would never use them to access their banks - preferring more traditional methods. This is not just ageist, patronising, twaddle - it's also wrong. Maybe a recent birthday has made me more sensitive to these matters. Right, time for a gin and tonic.

Posted with Blogsy
Posted by Ardmayle at 5:52 PM