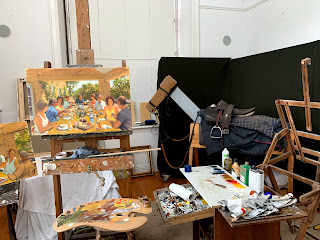 An edited version of this article appeared in the Winter Edition of the Irish Arts Review.

Peter Curling is a bit of a conundrum. He is a highly accomplished artist and arguably one of our most commercially successful. He has loyal patrons in Ireland, the UK and the USA and commands consistently good prices at auction. His €82,000 for Summer Exercise, Kileens at James Adam and Bonhams in 2006 has been exceeded only by two living Irish artists, Hughie O’Donoghue and Robert Ballagh. Although he considers his cartoons a sideline (‘not something I want to specialize in’), one, featuring the Champion Hurdler Istabraq, was sold for well over a million old Irish pounds at a charity auction in 2000. Yet amongst the Irish art cognoscenti he is regarded as  ‘an equine artist’ (with the term ‘mere’ lurking nearby) and does not enjoy the acceptance or recognition awarded to many of his less talented peers. He’s not a member of Aosdána and his only submission to the RHA Annual Show was rejected. There are laudable exceptions to this art establishment indifference. Brendan Purcell included him in his recent exhibition Irish Horse at the National Gallery of Ireland. Sadly the exhibition was cancelled but his contribution, a wonderfully vibrant study of one of his own horses, Boris Lunging, lives on in the handsome catalogue. In addition An Post has recognized his talents and produced a series of his works on postage stamps celebrating the Irish horse.

Curling’s capacious studio is situated amidst those verdant, horse-populated pastures north of Cashel. A few miles away, outside the village of Goold’s Cross, his handsome home is set amongst landscaped gardens and manicured lawns. A Raymond Till wire sculpture of a steeple-chaser in action and a charming dog and pup topiary tableaux by his wife, the sculptor Louise Curling, add artful touches. Against the wall of the studio is a completed painting of Patrick Mullins waving his whip triumphantly aboard Rathvinden – a Willie Mullins horse who won at Cheltenham and finished third to Tiger Roll in the Grand National. This is an unusual work in that Curling rarely identifies the horse he paints and generally avoids doing those formal studies beloved of equine artists going back to Stubbs and Alfred Munnings. His ambition with his equestrian paintings is not to immortalize the horse but rather to capture the atmosphere, the colour and the excitement of the racing and hunting worlds: ‘All that steam and mud flying at a point-to-point.’ These horse paintings also contain ample evidence of his feel for landscape and the infinite variety of our skies. This empathy with landscape Curling attributes to the many hours he has spent riding out with the Tipperary Foxhounds - one of our oldest and most prestigious hunts. His hunting companions have included such fabled horse men as Mouse Morris and Timmy Hyde.

Curling was always going to be an artist – his mother saw to that. ‘She kept telling me I was good’ he recalls. He was born in Waterford in 1955. His father was a bank manager who moved around the country – he lived in Kilrush and Kilkee for brief periods. His first introduction to horses was pony racing in Kilkee when he was seven. The family was immersed in the arts. His father was ‘passionate about music’ and performed in both the Abbey and the Gate. His mother dealt in fine art and was a competent painter. She encouraged her son to follow her example from a very early age with the intention that he should make a career of it. She entered a drawing he did of her foot for an international competition in Parents’ Magazine when, almost unbelievably, he was just four. He won the competition and the accompanying accolades confirmed the mother’s plans and the child’s direction. ‘It was massive in my life’. His father took early retirement from the bank and the family moved to England to take care of a sick uncle in Wiltshire – close to the border with Berkshire and the important racing centre of Lambourn. Curling was educated initially by the Jesuits at Stoneyhurst. This is now famous (or infamous?) for its part in Boris Johnson’s education but was a public school popular with the Irish upper classes. Oliver St. Gogarty, Joseph Plunkett and Charles Gavan Duffy were among the many Irish notables who were educated there. However, Curling was not destined for the academic path. He won an art scholarship to Millfield – a school that encouraged individual expression and crucially had both an excellent art department and riding stables. Polo and point-to-points were on the curriculum. He remembers fondly David Hemery the English Olympian who was a house master there. In addition, through his peers at Millfield, he gained entrée into to the world of racing - many of the pupils came from the elite of the English turf. His inclination towards the subject matter for which he is best known was further enforced by his mother’s art dealing activities where she specialized in equine art: paintings by Lionel Edwards and prints by Snaffles and Munnings.

Curling was early to market with his wares. His first exhibition of horse paintings took place in Lambourn when he was just 14 years old. A tribute to both the precociousness of his talent and the pushiness of his mother. The modestly-priced show sold out and Curling’s career was underway. A number of prominent trainers bought his work including Derby-winning Peter Walwyn with whom Curling subsequently became friendly. “He was so kind to me”. The following year the Tryon Gallery in London made a print of one of his paintings and the entire edition of 250 sold out. Two years later he had another successful show at Combridge’s in Dublin. All this happened at an age when most aspiring artists would be considering which art college they might attend. However, Curling had no ambitions to engage with the contemporary trends – abstract art, in fashion at the time, held no charms for him. He was wedded to the representational. Encouraged by a mentor, the distinguished equine artist Susan Crawford, he was sent to Florence at the ripe old age of 17 to study at the atelier of the famed Signorini Nera Simi.  Although he baulked a bit at the initial plaster cast studies, Curling concedes that this interlude equipped him with the drawing skills on which his career was built. ‘It was very traditional but It taught me to observe’. He’s not a natural draughtsman he maintains, unlike Orpen (whom he much admires), but he has overcome this through sheer hard work and the discipline he acquired in Florence. His art studies were interspersed with trips back to the UK where he rode work for various trainers including Sir Michael Stoute – trainer of the great Shergar. He also served a brief but significant artistic apprenticeship with the notable sculptor and equine artist John Skeaping. Following two successful shows at Combridge’s he felt that he could make a living in Ireland and returned first to a studio in the grounds of Emo Court and subsequently to Tipperary.

By avoiding art college Curling never acquired a set of peers in the art world as most artists have done. His friends and patrons mainly come from the world of racing and hunting and his daily life is lived amongst the horsey set. The friends and acquaintances he mentions in conversation are racing royalty: Dermot Weld, Nicky Henderson, Willie Mullins and Eddie O’Grady to name just a few. After completing a large mural for John Magnier of Coolmore Stud fame in 1983 he spent the proceeds on a horse called Caddy who he sent for training to Eddie O’Grady. The horse went on to win the Kerry National by 20 lengths.

The first thing you notice in both the studio and the house is the amount of non-equine art by Curling on display. On his easel in the studio is an unfinished painting of a group of friends dining out in Provence – where the artist has spent many summers. On one of the walls a series of nude studies show evidence of Curling’s continuing adherence to the classical disciplines. He organizes regular life drawing sessions for a group of local enthusiasts. There are also many landscapes – he seems particularly drawn to the ruins of an old mansion near Ardmayle - close to the River Suir that flows nearby. Back in his house there is also plenty of evidence that his talents extend beyond the equine: there is a particular light-dappled study of his conservatory that is worthy of Sorolla. And a recently completed still-life of a silver teapot leans against the dresser in his kitchen. His personal collection consists mainly of landscapes – mostly by 20th Century English artists, including Edward Seago, Ken Howard and Bernard Dunstan. And of course there are the horses. He’s a stickler for getting them right and you’ll notice that while the spectators’ and even the jockeys’ features may be blurred in his racing scenes, the horses all stand out in their shining perfection. He is not afraid to find fault with some of his predecessors and takes particular exception to Stubbs’ famous painting  Whistlejacket, where he feels the front legs of the rearing horse are way out of proportion (‘real howlers’).

Curling for all his commercial success and engagement with the racing world remains a serious, hard-working, and dedicated artist. He heads out every morning after breakfast to spend the day in to his nearby studio. ‘Now I’m painting more and getting more out of it.’ But he still does not find it easy: ‘I have to paint and draw every day to keep my eye in. It’s not that I enjoy it, but I can’t do without it. It’s a battle. I come home in the evening and I’m wrecked’. But he confides to getting grumpy if he doesn’t have his daily fix. He has cut back sharply on doing commissions and is keen to focus more on ‘things that excite me and appeal to me whether they’re horses or teapots or landscapes.’ It would be nice to see the Irish art establishment clasp Curling to its bosom and not just see him as a genre painter. He has surely reached the stage in his career where he merits a major retrospective in one of our art institutions – maybe IMMA or the Crawford. In addition to his glistening horses and vivid racing scenes, it could include his landscapes, his paintings of Venice, and his wonderful portrait of Fergie Sutherland (one of Irish racing’s great characters).  It just requires the Irish art establishment to remove its blinkers.