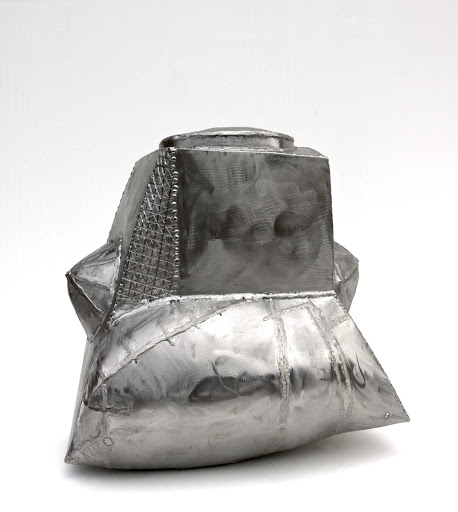 An edited version of this review appeared in the Sunday Times Culture magazine on the 28 May 2017.

The London-based Irish sculptor John Gibbons has described art as “a radiator for the soul”.  Despite its overtly contemporary feel, his latest exhibition makes this metaphor explicit with an array of highly-worked stainless steel sculptures laden with religious suggestiveness. These religious allusions are sometimes obvious as in Cross and elsewhere are confirmed by titles containing terms such as Temple Bell and Basilica. Messenger/Announce (above) brings to mind an antique reliquary and there are indeed relics woven into a couple of pieces in the show. But these are art relics.  Gibbons inherited a store of scrap metal from the great American Abstract Expressionist David Smith and he has incorporated pieces from this sacred hoard into his work  – the subtly different gauge reveals the artful homage. A couple of writhing ink and acrylic drawings on Melinex confirm his Abstract Expressionist affinities. Gibbons has an international reputation with work in Tate London and the Museum of Contemporary Art in Barcelona. This outstanding show demonstrates how he has earned it.

OJ - Made In America 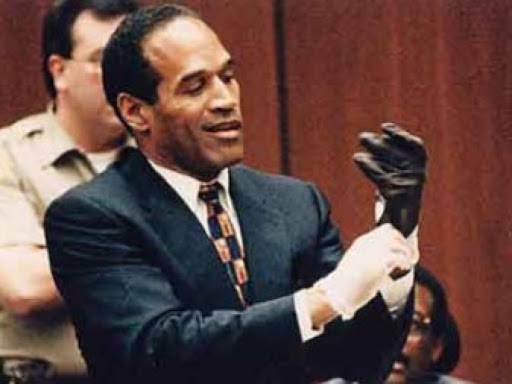 We’ve all had enough of OJ Simpson and his deeply unattractive personality so it took an effort of  will for me to begin watching Ezra  Edelman’s 7 ½ hour documentary on his rise and fall, and the racial politics of his times. It had received laudatory reviews so I thought I'd check it out despite my reservations. It turned out to be as good a documentary as I've ever seen. The only other contender is Shoah, but the greater significance and grim import of that horrifying saga about the Holacaust places in a different category to this extravagant and enthralling drama of a fallen football star.

The documentary opens with copious footage of his football prowess. I had never realised what a virtuoso he was. He was a running back but not one who caught long throws from the quarter back. Simpson was useless at fielding. His forte was lateral dodging and weaving against packed defences in restricted space. We saw him win games single-handed from impossible positions. For the first time I understood the subsequent fuss and the undying admiration of grown men. He was the Brian O’Driscoll or Henry Sheflin of American Football*.

*(My more sensitive friends objected to my clumsy and oxymoronic juxtaposing of  "grid-iron" and "sphere" as a synonym for American Football so I have reverted to the simpler term.)

He retired early to follow his Hollywood dreams and it was pretty much all downhill from there (although financially rewarding) as he made crappy movies and moved to Brentwood to become a white man. The films format is basically extensive footage, including home movies and newsreel accompanied by a chorus of friends, former friends, victims’ families, lawyers and police. We are not spared the gory crime scene and forensic details.

We trace the early relationship with Nicole and her regular returns to him despite numerous brutal beatings. We also are shown the complicit tolerance of the local police to whom he was a friend and a hero. Ron Goldman, the collateral damage in the whole bloody affair, receives deserved focus in the coverage – mainly through his still suffering father.  The farce that was the trial is covered in detail and we see precisely how it became a trial of racism in the police department rather than a trial of Simpson for murder. The evidence against him was overwhelming. The trial was held in downtown LA, rather than Brentwood, which meant that the jury was stacked with under-educated black women who had time on their hands – and who, more significantly, were all too aware of the attitude of local police to the black community. The weakness of Judge Ito meant the whole process was dominated by the high-powered collection of legal sleaze bags referred to as “the dream team”. Ito allowed Johnny Cochran with his fancy ties and the cunning F. Lee Bailey to run the show. The wretched Dearden for the prosecution was chewed up by their machinations. The infamous glove incident being the most telling example. Simpson had deliberately stopped taking arthritis medication so his hands swelled and was also wearing a surgical glove to prevent contamination. A stone farce.

A telling statistic about the trail was that 70% of white people believed Simpson guilty while 70% of black people believed him innocent. Feelings were so high that it became clear that a guilty verdict would have caused serious rioting in LA. An irony considering Simpson’s life-long failure to endorse any kind of black political initiatives. He saw himself as an honorary white man. Once free Simpson took to golf and partying with gusto. His sense of entitlement did for him in the end as he pursued some petty dealers in his memorabilia. The use of a gun to detain some of these wretches in an hotel room meant that he got 33 years for kidnapping rather than 6 months or so for a minor misdemeanour. Poetic justice of course.

It was an ESPN production that showed on BBC4 so to watch it you either need access to the BBC iPlayer or VPN software to access ESPN in the USA.
Posted by Ardmayle at 9:34 PM

As Above, So Below 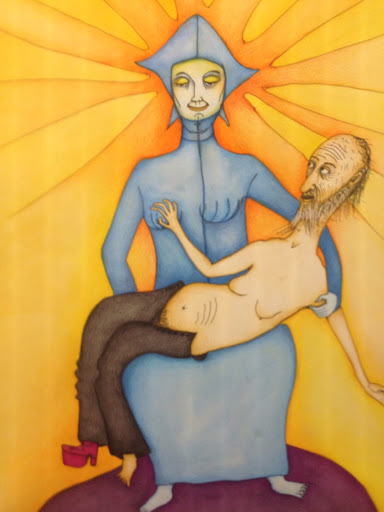 An Edited version of this appeared in the Sunday Times Culture magazine on the 30 April 2017.
It’s in our nature occasionally to lift our snouts from the trough, look upwards, and ask ourselves Captain Boyle’s deathless question: “what is the stars?” As Above, So Below aims to stimulate this spiritual questing through the work of 40 artists, ranging from Hilma af Klint to Bruce Nauman. The title of the show is taken from the opening lines of the Hermetica, one of the key texts of occultism. The dark side is explored by number of the artists (including Kenneth Anger and Cameron) who claim allegiance to the Great Beast Aleister Crowley. Patrick Pye’s stagey Old Testament scenes (with their faint whiff of El Greco) may inspire no great feelings of awe in these secular times but few will not be moved by Grace Weir’s superb In Parallel - a 20 minute video concerning Euclid’s Elements. This illustrated geometry lesson is accompanied by philosophical ruminations on man’s repudiation of nature in favour of abstraction. Give yourself time to explore this exhibition – it’s a hugely entertaining and frequently thought-provoking magical mystery tour.   Irish Museum of Modern Art   John P. O'Sullivan.
Posted by Ardmayle at 12:14 PM

The McCanns and Anne Enright

For those who can't penetrate the LRB firewall (it does offer limited free access for one-off articles) here's Anne Enright's text: