If I was in any doubt about paying the household charge, Phil Hogan's hectoring performances in the media have made up my mind for me. His old-fashioned authoritarian tone ill becomes any politician today. Deference and humility towards a much put upon populace would be more apt, and more productive. His bluster about "the law of the land" rings hollow in a land where gross white collar crime goes unpunished.

Maybe we should be grateful to him. His lack of discernment could be the catalyst for the people at last to say " thus far and no further". Viva la Revolución
Posted by Ardmayle at 10:55 AM 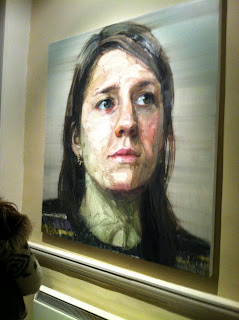 An impressive collection of portraits of artists, writers, and musicians, with a few characterful unknowns thrown in. The most striking pieces are the big (4 x 4 feet) oils but the smaller oils and the crayon on paper pieces work well also. The two Michael Longleys caught my eye particularly.

For those brought up on the waxwork blandness of many RHA portraits what strikes one first is how expressive and full of life the works are. Davidson's masterly use of impasto brings a substantial sculptural feel to the work. Put them alongside the romanticised flat graphical work of Edward Maguire (who also painted writers) and see the difference. Look at the state of Maguire's portrait of Seamus Heaney below.

There isn't a single smile in this show. Life is obviously a serious business for these creative types. Each portrait seems to encapsulate the tragedy of the human condition - with Brian Friel and Basil Blackshaw looking particularly pissed off about things. Even that amiable woman from the film Once, Marketa Irglova, looks unhappy (see above), and her with a show about to open on Broadway. But I'm ok with all this heroic grimness - this is after all a vale of tears. The large works are so over powering that I wonder who would buy them aside from institutions. They would certainly loom broodingly over a domestic setting. It would be nice to see our museums acquiring some of them. 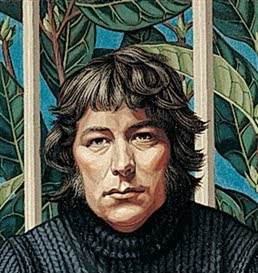 Worthy, but more a chronological list of his doings than an attempt to grapple with the man inside. He was obviously a domestic ogre in many ways and he certainly treated his unloved wife badly. He relentlessly pursued his bachelor interests, mostly drinking and eating with male companions, just the odd bit of whoring. What a hard worker though - from his early blacking factory days to the unfinished Mystery of Edwin Drood on which he was working up to his death.

More up its arse than a lot of Dyer’s work. Tarkovsky is a very esoteric dish whose delights are apparent only to a few. A whole book describing a very inaccessible film is a brave move. Especially a film that involves lacunae connected by non-sequiturs. Still there’s his reflections on threesomes that didn’t happen and other amusing Dyer tropes.

Maybe I’ve been reading too much of this historical atrocity porn (Stalin, Heydrich, Mao, Pol Pot – I’ve read them all and weeped) as this seemed all too familiar to me. Snyder focuses on what happened in Poland, Ukraine, Belarus and the Baltic states so we hear again of the Katyn Woods massacres, Stalin’s starving of the Ukraine in 1933 and his wholesale slaughter during the Great Terror in 1937-38. Hitler's contribution was the mass murder of Polish Jews and the Hunger Plan whereby he starved Russian peasants and prisoners of war - but he never came near to emulating the scale of Stalin's atrocities. Incidentally Snyder collaborated with the late great Tony Judt on the latter's final work published recently. 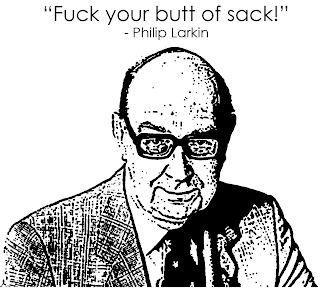 A book for dipping into. Purists may complain about the inclusion of juvenilia and pieces extracted from letters. These are often sub-standard, scatological, and politically incorrect but there are some choice lines. The very detailed annotations were revealing. I unearthed such gems as as the fact that the Dolmen Press in Ireland turned down his masterpiece collection “The Less Deceived”. While the founder Liam Miller liked it, Thomas Kinsella found it “too sexy and too self-pitying”. For shame Tom, and you not worthy to lace his brogues.
Posted by Ardmayle at 11:47 AM

Tweets, Lies, and the Sunday Independent

You can’t help but sigh wearily at all this fuss about the anonymous Tweet on RTE. We’ve had to endure various po-faced discussions in the conventional media about the flakiness of the new media. You would imagine from the pious effusions coming from these discussions that they always tell the truth and that their sources are impeccable. Distortion, bias, sloppiness, proprietorial agendas, and downright lies are the stock in trade of a lot of the traditional media. Take the Sunday Independent for example – and the Harris’s crazed campaign against RTE. And the Irish Times is not immune as its reporting of Caroline Walsh’s death attests.
Posted by Ardmayle at 9:54 AM