The Birth of Modernism in Irish Art 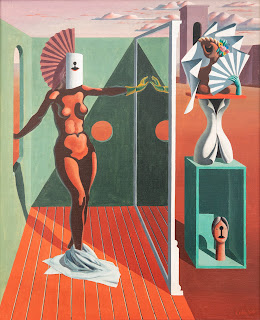 David Britton’s fascinating survey on the development of modernism in Irish art covers a period when our writers were part of the European avant-garde. Our visual artists however were inclined towards the safe and conventional both in form and subject matter - catering to the taste of the newly-emergent Catholic middle-classes. A taste that favored benign landscapes, rustic idylls and artists such as Paul Henry and Sean Keating. The writ of the Royal Hibernian Academy (RHA) ruled. But in the 1920s things began to change. A number of artists, often Protestant, Anglo-Irish and female began to travel and the old regime was assailed as new forms of art began were explored. The 47 artists chosen by Britton represent the old and the new order. He juxtaposes works by advocates of modernism such as Basil Rákóczi, Mainie Jellett, and May Guinness with more conventional paintings by James Humbert Craig, Maurice C. Wilks and the shamelessly folksy William Conor.

In 1923 Mainie Jellett and her bosom friend Evie Hone returned from Paris full of the joys of cubism – following their sojourn with Albert Gleize.  That year they exposed Dubliners to this brave new world in a group show. This was followed by their two-person exhibition the following year. Dubliners were not impressed. The Irish Times described Jellett as “a late victim to this artistic malaria”. But Jellett persisted with her vision throughout her short life in her teaching, writing, and painting.  She could be seen as the heroic mid-wife who presided over the difficult birth of modernism in Ireland. Jellett’s zeal had a missionary flavour. She maintained that “the art of a nation is one of the ultimate facts by which its spiritual health is judged and appraised by posterity." Evie Hone was a constant ally. She and Jellett along with Hilary Heron, Louis le Brocquy and others founded the Irish Exhibition of Living Art (IELA) in 1943 – arguably the single most important initiative in breaking the hegemony of the RHA.

It is striking how influential the female artists were in introducing European trends into this moribund Irish scene. An important factor was the Taylor Art Scholarship that expanded the artistic horizons of many female artists by allowing them to travel. Before Jellett and Hones’s formative stint in Paris, May Guinness and Mary Swanzy had made their forays into France. Swanzy is represented by the exquisite Sunny Landscape near St. Tropez that shows her at her brilliant best. The males were less adventurous than these pioneering women. One exception was Roderic O’Conor who went to Paris in 1886 and became a close friend of Gaughin’s and a circle of French artists.

One of the show’s charms, and it has many charms, lies in introducing us to some of the forgotten or lesser-known figures in Irish art such as Joan Jameson, May Guinness, Nevill Johnson and the wonderfully named Georgina Moutray Kyle. It also reminds us of some tragic figures like Kenneth Hall who killed himself and Dan O’Neill whose career was blighted by alcohol and bad luck. And who is now familiar with the paintings of Thurloe Conolly? Born in Cork in 1918, he was once considered “in the very first rank of our advanced painters”. He joined the White Stag group and had a successful career showing in New York, Los Angeles, London and elsewhere in Europe. He is represented by A Very Powerful Queen – a weird and wonderful piece that shows the influence of Paul Klee and African art. Cecil ffrench Salkeld is another notable character. In 1924 he took himself off to Kassel in Germany at the age of 17 to study art under Ewald Dulberg. He went on to become a major contributor to the gaiety of the nation in the 1940s and 1950s. He set up the Gayfield Press and in 1954 Founded the National Ballet. His unabashedly erotic Leda and the Swan would certainly have caused fluttering in the dovecotes of de Valera’s prim Ireland. Micheál Mac Liammóir’s Monte Carlo (influenced by Beardsley) might also have raised eyebrows amongst the more discerning. Initially it seems like a harmless trifle with its promenading toffs but when you look closer it’s replete with coded gay references. To punters used to the homely world depicted in James Humbert Craig’s Races at Waterfoot, Maurice C. Wilks stiff and stagey Cottage Interior, or William Conor’s The Street Fiddler these works would have truly shocking.

Sculpture gets a modest look in with four small pieces. We are reminded of the somewhat neglected Hilary Heron. She is another artist whose extensive travels exposed her to outside influences. A contemporary critic applauded her for bringing “ something fresh, diverting, and also very genuine to our inbred world of sculpture.” That something involved African and Sumerian influences and clear indications of knowing her Picasso.

Most of the works in the show come from private collections and so will be unfamiliar to many art lovers. Jack B. Yeats’ enigmatic We Are Leaving Now is being exhibited for the first time in 50 years. It was painted in 1928 and is believed to be a reference to the problem of emigration – a stretch I’d say. Roderic O’Conor’s portrait of his wife Rene Honta is hardly his finest hour – she seems depressed. Maybe it’s because her nose looks as if it was clumsily affixed with a palette knife as an afterthought. Contrast it to the warm and characterful portrait of his wife Madge by George Campbell or the chutzpah of May Guinness’s La Parisienne. There are two striking surrealist pieces by Colin Middleton and Nevill Johnson that owe a debt to Dali. Dan O’Neill’s dramatic homage to Van Gogh, and a tasty William Scott are amongst the many other delights on view in this absorbing exhibition. It runs until August and anyone who has any interest in art should not miss it.