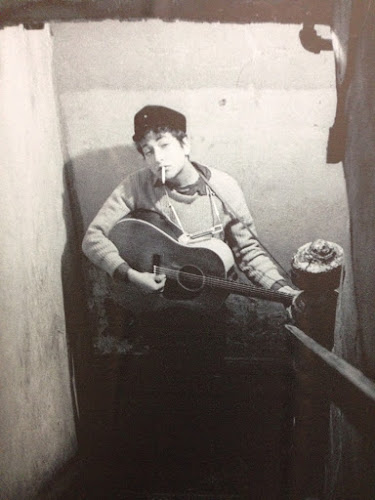 
These are images from a time capsule. In the early Sixties Life photographer Ted Russell took an extended series of photographs of the aspiring musician with a view to doing a feature in the magazine. His editor demurred after listening to Dylan's music and the images have lain unseen for over 50 years. They show us the young Dylan at home in Greenwich Village, often with Suze Rotolo (the girl on the cover of The Freewheelin' Bob Dylan album), or in clubs such as Gerde's Folk City where he played his first major gig. There's plenty of domestic detail - the rumpled bed, the cheap wine bottles and the problematical art. Over the four years portrayed you see a gradual evolution from the callow and eager to the cool and self-contained - the cigarette a constant prop. These are the years of his Woody Guthrie persona - all work shirts and social awareness. This was before he went electric and became a rock star - between With God on Our Side and Like a Rolling Stone. It's a smiling amiable Dylan far from the croaking curmudgeon we encounter at his concerts these days. The associated book contains all the photographs in the show as well as an hilariously self-aggrandising foreword by Donovan.

I walk my dogs most days - either up Killiney Hill or along the beaches from Killiney to Shankill. I amble along while the Missy and Shyla swim, eat seaweed, chase balls and sticks and play with other dogs. A favourite pastime is chasing the birds who play around the water's edge. They never catch them of course but both sides seem to enjoy the chase. Last week I was returning to my car parked at the end of Corbawn Lane after a walk along Shanganagh Cliffs. As I passed along Corbawn Avenue approaching my car I was a tad surprised to see a plump hen walking along the footpath across the road from me. At the same time my two brave unleashed dogs caught sight of it and shot across the road in hot pursuit. Dogs will be dogs and a slow-moving bird is such stuff as dreams are made on. The affrighted creature managed to fly up onto the adjacent wall and thence into the garden from whence she presumably had come. I managed to get Shyla into the car but Missy had disappeared into the garden through the open gate. It was a large garden circling a house and all I could hear was squawking hens - the truant had friends. Given all the hullabaloo it wasn't long before a woman appeared - a handsome blonde in her early forties. I apologised for the intrusion and she seemed not overly upset. But Missy was nowhere to be seen and the squawking had subsided. Assuming she'd exited some other way, through a hedge or whatever, I left the garden and went looking for the errant bitch along Corbawn Lane. No sign of her for five minutes or so. Then I heard sounds of a very angry male voice ("get out, get out") coming from the garden accompanied by barks and squawks. Back I went fearing the worst. Missy appeared in a highly excited state and ran off down the road to escape the anger of the hen man. The woman appeared again and this time she was less than friendly. "You need to have that dog on a leash" she lectured me. I felt like countering that the same went for her bloody hen but decided that a sincere apology was a more diplomatic option. I was relieved there were no casualties apart from the trauma of the chase. And I hope she's picking up the hen shit from the footpath.

Posted with Blogsy
Posted by Ardmayle at 4:31 PM

Review of This is the Ritual by Rob Doyle 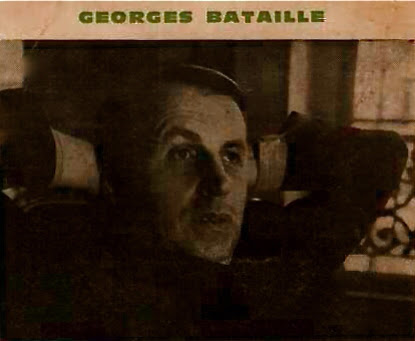 An edited version of this review appeared in the Sunday Times Culture magazine on the 31 January 2016.


That Nietzsche has a lot to answer for. He's the prophet who brought the alarming news that we are alone - adrift in the vacant interstellar spaces. For some, this message was a liberation and a cause to celebrate the sensual pleasures and other passing delights of our brief earthly reign. For others, death and the prospect of everlasting extinction cast a pall over all endeavours. Either way morality became unfashionable. We are all beyond good and evil now. As in his first novel (Here are the Young Men), the dark shadow of the German philosopher looms over the action in Rob Doyle's new collection of short stories. He is referred to frequently by the characters in the book and is the subject of one story: On Nietzsche.

The sole duty of the writer, according to Jean-Pierre Passolet in the final story is "to bear witness to the horror, and to the magnificence". Doyle does his duty by looking into the abyss on our behalf and reporting back. We are far from the conventional Irish concerns: the coming of age of a sensitive soul in rural Ireland, or the predictably dysfunctional family gathering for Christmas. Doyle's themes suggest souls lost not in the bogs and prejudices of Ireland but adrift in a hostile cosmos. His concerns are universal and his mentors international. Writers whose influences permeate these stories include Borges, Beckett, Burroughs, Bolano, and especially Georges Bataille (see above). The latter is explicitly referenced in On Nietzsche (which is the title of a Bataille book on the German philosopher), and in Anus - Black Sun which is surely a homage to Bataille's Story of the Eye. The cosmic musing in Doyle's story echoes Bataille's theory of the sun as an anal eye, a sphincter guarding the entry to darkness.

But don't be put off by the literary allusions. These compelling vignettes stand up for themselves even if you're ignorant of the more arcane influences. They transport us beyond the routines and petty distractions of our daily round. For comfort, we are told, bear in mind the unreality of life. The stories are visceral, scatological and frequently disturbing. There are no happy and fulfilled characters, no glory or redemption. The tales reek of failure, despair, misogyny, fear and loathing, and not a little sexual disgust. On Nietzsche tells of the narrator's inability to write a book on his intellectual hero. Lost in the swamps of preparatory reading (Fichte and von Hartman) he gives up. Along the way his Russian girlfriend leaves him. Elsewhere writers disappear off the face of the earth, days fuelled by drink and drugs pass fitfully, friends die pointlessly, partners are unfaithful, and a woman is described as being "brazen and vulgar, as intoxicating as an open sewer".

Those looking for traces of autobiography are not discouraged by the frequent appearance of the author's name amidst the action. Many of his characters are aspiring writers, doomed to failure by an absence of talent and some manifestly bad habits. Doyle has travelled a lot and it shows in the diverse locations into which he has pitched his stricken protagonists. The action shifts between Dublin, London, Paris, Barcelona and Mexico but the angst remains the same. Untethered from the old verities these are lost souls. There's plenty of sex but it's mostly joyless and often accompanied by physical disgust. Sexual jealousy is also a recurring theme, frequently involving a racial element. The straying women dream of black boxers, or take up with Arabs or Turks. A character called Rob Doyle declares: "I also wish I had a dog having proven already that I can't live with women." Masturbation is a regular activity, as if highlighting our essential isolation on this vale of tears. Drug abuse and heavy drinking are the norm. One character has invented the Guinnsky (a Guinness and whiskey concoction) to assuage his pain.

No Man's Land describes an encounter between a depressive young man and an old vagrant in a deserted Dublin industrial estate - a wonderfully Beckettian backdrop. The vagrant is further down the path on which the former has just embarked. "Nietzsche didn't see this coming" is amongst the wisdom he imparts as he recounts the downward spiral that is his life story. The chastening effect of the wretched creature's tale sends our young man back to mother and college. In the opening story, John-Paul Finnegan a writer, described as a paltry realist, delivers a foul-mouthed diatribe on the Bloomsday industry: "making absolute fools of themselves by aping the characters in a book they have never read". This piece is one long, entertaining rant that takes place on a ship called Ulysses sailing from Holyhead to Dublin.

Outposts comprises six sections and over 30 pages and is made up of disconnected paragraphs "snatched" from sources as diverse as Dostoyevsky, Desmond Hogan, Blaise Pascal and conversations with patients at St. Senan's (a psychiatric hospital in Wexford). There's no good news here, it's all ennui and despair. Relationships are impossible and life has no meaning. These are the effusions of "Men who brood in small rooms with bad air." There's a reference to "an unfinished novel by some frazzled drifter, 'Rob Doyle'". These are cryptic variations on the longer stories in this unsettling collection - cries from a psychic wasteland, fragments shored against ruin.