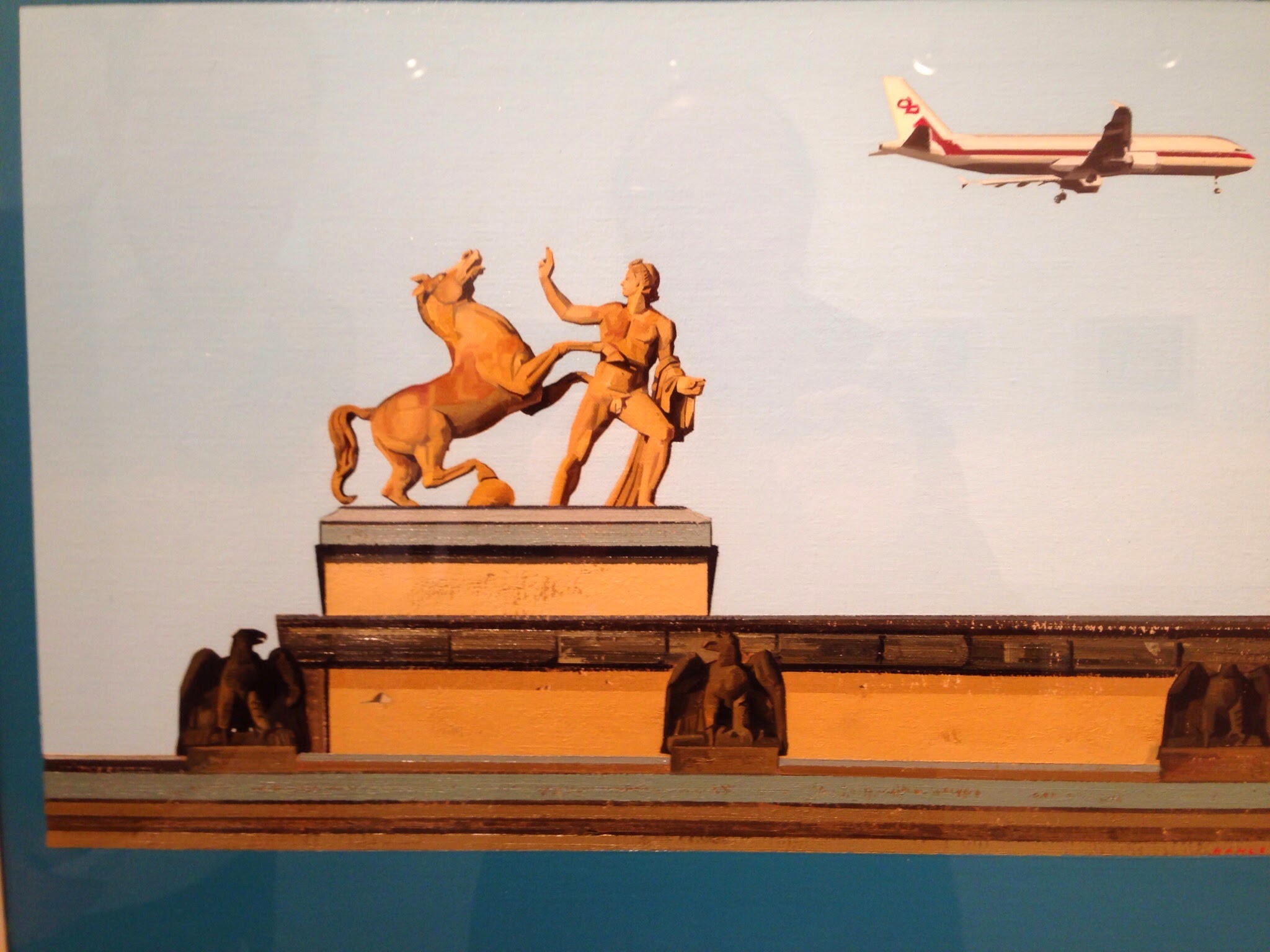 James Hanley is the very model of an establishment painter. A bastion of the RHA, a member of Aosdana and on the board of the National Gallery. He's perhaps best known for his portraits of  figures from official Ireland - prominent politicians, garlanded professors and august old painters. He's the one who immortalised Bertie Aherne in oil - the bland and benign figure he portrayed is an ambiguous legacy. He's also done some fine nude studies over the years. This show sees him move away from his usual concerns to give us a series of paintings based on well-known locations encountered on his travels around the world - the standardised blue-bordered format suggests picture postcards in oil. While these are efficient well-wrought pieces there is an absence of struggle or expression in them - Paddy Graham he ain't, nor would want to be I expect.  An exception to this is his minimalist study of Auschwitz. The lookout towers, the box car, and the shadowy figures moving in the mist capture the essence of that bleak and blighted spot.

Under the Skin on the other hand is a piece of arty hokum with as many holes in the plot as Rab C. Nesbitt's vest.  But the cinematography is gorgeous and Scarlett Johanssen lights up the screen in every frame she's in - which is most of the movie. There are allusions to other films - and to directors such as Stanley Kubrick and David Lynch.  Here's a suggestion of 2001 a Space Odyssey, there's a reprise of the Elephant Man. All good fun. The juxtapositioning of the glamorous Johanssen with the ill-favoured denizens of Glasgow's mean streets is genius.  Also, they'll certainly need sub-titles in the US for the heavy duty Scottish accents.  I was lost most of the time. Johanssen spends a lot of the film in a state of undress and it's refreshing to see a heroine with a substantial womanly figure. While her chubbiness is  hardly Lena Dunhamesque, it is still a brave statement in these toned and torqued times.
Posted by Ardmayle at 3:16 PM 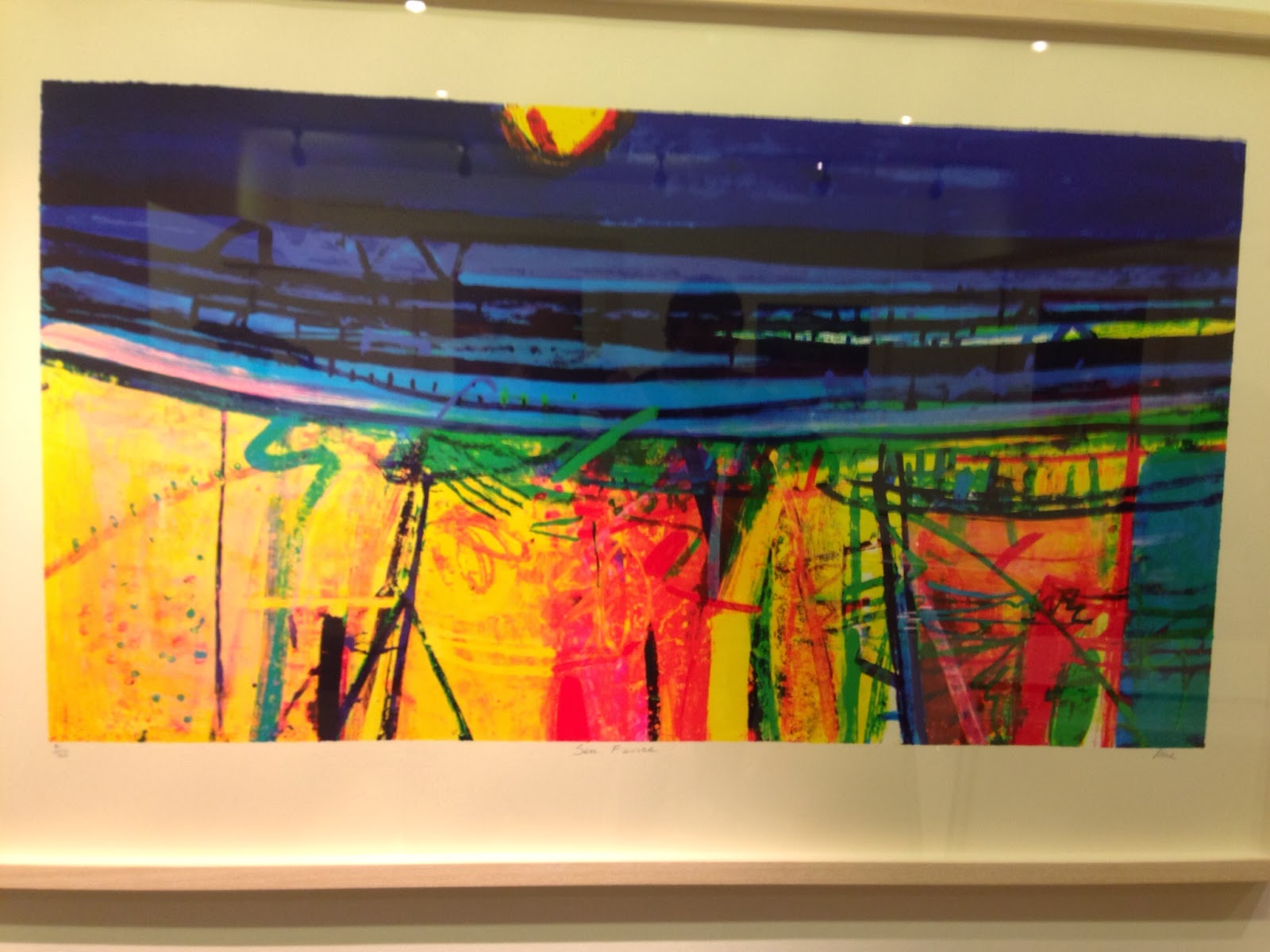 A slightly edited version of this piece appeared in the Sunday Times Culture magazine on 9 March 2014.

SO Fine Art Editions is a newish gallery in South Anne Street that specialises in limited edition prints, sculpture and photography. Its first solo exhibition features prints by the eminent  Scottish artist Barbara Rae. This is an artist who gets around.  The titles include Karoo, Autumn Sierra, Vaucluse, and Achill Fence. She's a regular visitor the the Ballinglen Arts Foundation in Mayo so the West of Ireland is well represented. Rae asserts that the most important development in her career was when she was invited to Santa Fe, New Mexico, for a few months. The intensity and clarity of the light there changed the way she used colour in her work. And indeed lush luxuriant colour has become her trade mark - even her Achill scenes are dominated by reds, oranges and yellows. Rae eschews the tag of landscape painter notwithstanding her depictions of various exotic locales. Her interests are less on the bounty of nature and more on the marks of man's encroachments.  Landscape is the backdrop for her  of the patterns and objects he has left behind.

Peter Burns is a young Dublin artist whose reputation received a deserved boost in the Futures 12 show at the RHA in 2012.  He studied both sculpture and painting at NCAD and his current exhibition demonstrates this versatility.  In addition to the fifteen paintings on show there are around 40 small brightly coloured sculptures of pink fleshy heads, fabulous beasts and sundry exotica.  Burns artistic realm embraces the grotesque and the fantastical.  The paintings contain references to art history particularly, and to literature and myth.  The grotesqueries are rendered playful by the lightness of the colours used and the humour of the tiny throwaway details.  Lies Upon Sleepers, his take on Fuseli's Nightmare, is a macabre exception to this general playfulness. There is a density of incident in a lot of the work that suggests Hieronymous Bosch - and there's a clear link between Burns' Demesne and The Garden of Earthly Delights.  The self-portrait of the artist bestriding the mountains in Nemesis is surely Gulliver's reincarnation.  But these connections shouldn't be overstated.  Burns' work is highly original and full of humour.  The latter a quality much neglected in the art world where po-faced earnestness often holds sway.