The end of an era for sure. Aside from nostalgia for a figure from a lost age of promise, his departure means that Ireland no longer has a friend in high places. It also means that an ever-dependable liberal voice in the Senate is now silenced. Forget the mean-spirited obituaries, he made a mistake and paid for it by losing the presidency. You hear talk of his drinking and womanising. So what. If I had a monster for a father and three of my brothers had died violently I might also be tempted to reach for the bottle occasionally, and overreact to a well-turned ankle. He fought the good fight tirelessly in the Senate and as one of his final acts had the prescience to endorse Barack Obama and live to see him bring his brothers' political philosophy back to the White House.
Posted by Ardmayle at 2:30 PM

The Insolence of Office

You have to laugh at the emerging details (courtesy of the Sunday Tribune) about John O'Donoghue's travelling habits when he was a government minister. The brazen sense of entitlement to private jets, five star hotels and chauffeurs everywhere - it fair takes your breath away. The latest revelation had him paying €472 for a chauffeur to take between two terminals in Heathrow. And all for what? Some po-faced factotum in the relevant department maintains that he was representing the Irish people blah blah at an important race meeting/tourist board lunch blah blah and so would be promoting the blah blah. One would love to see the ROI on these escapades - or, horrible dictu, could they just be jollies?

And now just to confirm the impregnable chuzpah of the man, he has broken his coy Ceann Comhairle silence on all public matters to row in on the debate about drink driving limits. This from a man who habitually has a chauffeur sitting outside while he has his head in the trough.
Posted by Ardmayle at 12:08 PM

Tipp's win over Limerick in the All-Ireland Hurling Semi-final was more an exhibition match than the intense encounter they needed to prepare them for Kilkenny. Limerick just stopped playing after those early goals and the wide open spaces of Croke Park were ideal for those speedy forwards. Eoin Kelly is on the way back and in Noel McGrath up front and Padraic Maher at full-back they have two new stars. This team will win an All-Ireland and it may even come this year. To get to the final they beat Cork, Clare, Waterford and Limerick - not an easy route.

Don't you wish Padraig Harrington would shut up about the mechanics his game and his psychology and just play. All this golf in the head stuff is ruining him. He should read some of D. H. Lawrence's fulminations about sex in the head as distinct from the real instinctual thing.

Premier League football, who gives a shit. The teams with the most money buy all the best players and as soon as one of the lesser teams get a good player her is snapped up and the imbalance is perpetuated. Everton having lost Rooney to Manchester United a few years ago will now lose Lescott to Manchester City. I'm bored of it all.

Is Sea the Stars the best horse since Nijinsky? Let's see him win the Arc before we decide. Also, what's all this this preciousness about only racing him on good ground. Great horses can win on any going - Nijinsky did.
Posted by Ardmayle at 1:45 PM

Schull beneath the Skin 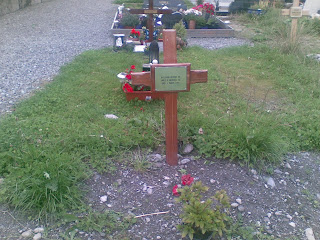 It's always a pleasure the spend a few days in Schull. The Gubeen walk, the dogs' antics on Barleycove Beach, the bread in Brosnan's, the crab sandwiches in O'Sullivan's of Crookhaven, the pint and bohemian ambience in Hackett's (although there has been a toxic influx of yachties in recent times), Mount Gabriel looming above, the harbour spread below, the star-crossed Fastnet on the horizon. I paid a visit to the beautifully located cemetery at the end of Barry's Hill. There I came upon the recent grave of Jim O'Driscoll (a simple cross at present) - great spot overlooking the harbour.

Two down from him I noticed the recent grave of John Verling, another old acquaintance from the art scene, a man who relished his Rubenesque nudes. They'll have plenty to discuss.
Posted by Ardmayle at 1:30 PM

Just finished an account of Trotsky's last days in Mexico - leading up to his assassination by a Stalinist agent. The book is inappropriately titled "Stalin's Nemesis" (Stalin's Nemesis: The Exile and Murder of Leon Trotsky
by Bertrand M. Patenaude). Surely Stalin was Trotsky's nemesis? He wrested control of the party from him after Lenin's death, he banished him, wrote him out of the history of the Revolution, and eventually killed him. Anyway it's a diverting story with a potted history of Trotsky thrown in for the ignorant like myself. He had many admirable traits but he was inflexibly doctrinaire about Marxism. Stalin tailored it to suit his lust for power, but Trotsky was unbending in his adherence to dialectical materialism and his belief in the global nature of Marxism. He praised the Soviet invasion of Finland because it was spreading the revolution - when all reasonable people saw it as a land grab by Stalin. A lot of the book is taken up with descriptions of the elaborate security precautions taken by Trotsky to avoid assassination. In the end he was murdered by a friend of a friend who got close to him despite a dodgy French accent and a curious past - sloppy. Despite his lengthy marriage to Natalia he had an eye for a well-turned ankle. He had no qualms about bedding Frieda Kahlo despite Diego Rivera being his host and he had a go at her sister as well - but was rebuffed.
Posted by Ardmayle at 1:28 PM

I don't often watch Gaelic football - it's got none of the finesse of hurling and there seems to be a premium on being a hard man. And then there's the technical issue of the tackle - the choices seem to be a shoulder charge or a lot of hand flapping. But last Sunday I watched the Kerry Dublin match from start to finish and was almost persuaded that it's a reasonable diversion. Kerry's passing, running into space and general creativity in the wide open spaces of Croke Park were a joy to behold. Unless of course you were a Dublin fan - in which case you wondered how a whole team could freeze in unison. Almost every sports journalist in the country had made Dublin favourites - a fatal diagnosis against Kerry.
Posted by Ardmayle at 8:08 PM

"Endpoint and other poems" by John Updike: Still writing in the midst of his final illness with the void beckoning. Now that's grace under pressure.

"Be with me words, a little longer; you
have given me my quitclaim in the sun


"Katyn" directed by Andrzej Wajda: You forget how powerful cinema can be until you encounter a classic like this. Wajda's father was one of the Polish officer class and intelligentia slaughtered by the Russians in Katyn in 1939. Stalin's aim was to destroy any future dissent in a country he intended to occupy. Its attention to period detail and its slow build up to the horrific and inevitable climax made riveting viewing. It also made you aware of how lucky our generation has been in avoiding death, destruction and dislocation.


"Geoff in Venice, Death in Varanasi" by Geoff Dyer: Smart arse, witty, and sexy. The first half takes the piss out of the creatures who attend the Venice Bienalle, lots of drinking, adventurous sex and hilarious put downs of contemporary artists. Gilbert and George are described as "an affable pair of pricks" whose work is as "weary as some harmless sin". There are also some reflections on Turner in Venice and Tinteretto. The second half takes us to the ghats of Varanasi and reflections on death. Nice balance.

"But Beautiful" by Geoff Dyer: A real curiosity this and worth seeking out even if you are not a jazz buff. It's a set of fictional imaginings of the decline and fall of a number of jazz giants. It brings you into the interior world of Lester Young, Charlie Mingus, and the truly eccentric Thelonious Monk amongst others. You are also taken on the road with Duke Ellington and along the way you get a primer on the weird and wonderful world of jazz.
Posted by Ardmayle at 6:37 PM