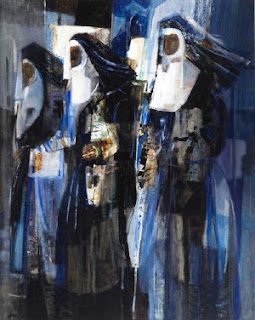 Went along to the De Vere art auction at the Berkeley Court last night to gauge the current state of the art market, and perhaps to rob a striking little Dan O'Neill I had my eye on. I arrived on time but there wasn't a seat to be had - a good indicator in these austere times. A feature of the show was the eight works by Donald Teskey - most of them top quality examples, especially a beauty of Dun Laoghaire. There was also a large nine-piece painting of cats by Shinnors (owned by a face about town), that begged to be broken up into individual works.

The story of the night I suppose was that good work sold for good prices and poor work didn't sell. Around 60% sold but there was little of quality left behind. There were a number of bargains to be had: a sinister little Martin Gale went for €4,200 and a striking Patric Pye charcoal for a mere €800. I let my little Dan O'Neill go for €2,800 but am still suffering remorse. I can see those eyes staring at me. 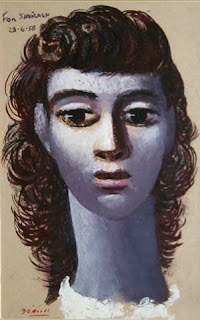 All the Teskeys bar one sold - many for well above their reserve. A smashing George Campbell of looming nuns went for €52,000 - twice its estimate; while a poor William Scott oil failed to reach its reserve. Shinnors' cats didn't sell (it's a cumbersome size) but two other pieces by him went for substantial prices. Paddy Collins continues to be unloved at auction and you couldn't give away the Michael Farrells. A newish name on the auction scene, Gearldine O'Neill got very good prices for a couple of colourful still lives. Not for me dear but I can see why she will sell. There was an appalling Bewick of rugby players that predictably went well and the glut of Charlie Bradys on the market meant that he didn't. A good time perhaps to get a couple. A lively night and I'm sure Buzzer (John de Vere) raised a glass of claret to Donald Teskey afterwards.
Posted by Ardmayle at 5:16 PM

Phil Coulter Versus the Haka

Ireland against New Zealand at Croke Park, a unique occasion, never perhaps to be repeated. There was a wonderful atmosphere in the buildup but isn't it appalling that our riposte to the haka is a bland Phil Coulter song. The shame of it. The crowd played an active role in the first half, disrupting lineout calls and becoming frenzied the few times Ireland broke out of the NZ half. But after the penalty try and the early score in the second half things petered out. The NZ defence was impenetrable so at no stage did Ireland look like scoring a try and in fact spent most of the match defending desperately. The team just lacked the power, speed and intensity of the All Blacks - especially the South Sea Islands contingent, who seem to make up a large proportion of New Zealand teams these days. Of course it's the start of the Irish team's season while NZ are battle-hardened after a testing campaign - and they had their very best team on duty. But Ireland were poor in most positions. I've never seen O'Gara so tentative - his first kick was charged down and he looked a haunted man throughout. There was plenty of aimless kicking to the NZ back three, asking for trouble and getting it. As we were efficiently decanted from Croke Park I was inclined once more to ruminate bitterly on the freakish chain of circumstances that led this NZ team to lose the World Cup a year or so ago - and cost me a pretty penny.

And what of Munster versus New Zealand today? What a farce, Munster playing without their ten Irish internationals surely have no chance. Their novice pack will be devoured, so their classy back line (mostly from the Antipodes) won't get a sniff of the ball. Let's hope NZ treat it like an exhibition match and don't humiliate us.
Posted by Ardmayle at 12:07 PM

The good, the bland and the ugly - although as always the bland predominates. What stood out? A big powerful Teskey seascape (although it teetered between landscape and portrait size in a disconcerting way), a couple of typical Martin Gales, a smashing Mick O'Dea portrait of a woman against an orange background (such expression in the face compared to the waxwork efforts of James Hanley), a couple of moody pieces by Francis Matthews, and some classy visual poetry from Eilis O'Connell. Nick Miller disappointed with his lacklustre and inaccurate portrait of Sean McSweeney. McSweeney himself had an unusual landscape that moved away from his rural Rothko style - but still retained his characteristic iridescent green. Same as before stuff from Felim Egan, John Noel Smith, William Crozier (I just don't get it), John Shinnors and Liam Belton. There was nothing there I lusted after but would have bought the weird nude by Jack Donovan had I being in funds.

The redesigned building is a big improvement with a coffee shop and bookshop added and a few more discrete gallery spaces.
Posted by Ardmayle at 5:16 PM

Damn near choked on my kedgeree last Saturday when, leafing through the Irish Times, I happened on that photo-realistic painting of Nell McCafferty in the nude. It was only saved from being totally explicit by a fortunate fold of flesh. Is it not ironic that this bastion of feminist ideology is paraded before us for our delectation (well OK our prurient horror) like some page 3 girl. I attended the RHA annual show last night and encountered it in the flesh. Consdidering the current state of the art market I doubt anybody will pay ten grand for it.
Posted by Ardmayle at 2:17 PM

Who to pick for our upcoming test against the All Blacks? We seem spoiled for choice in some areas - but our options are limited in the front five, out half, and centre. I think that Kidney will go conservative and pick the following team: Dempsey, Bowe, O'Driscoll, Fitzgerald, Kearney, O'Gara, Reddan, Horan, Flannery, Hayes, O'Connell, O'Callaghan, Wallace, Heaslip and Ferris. The back row is the biggest imponderable. He could pick Jennings, Wallace and Quinlan or Jennings, Heaslip and Ferris but I reckon he'll prefer Wallace to Jennings. He'll never risk Earls at full back will he? Mind you he brought in Denis Hurley in the semi-final of the Heineken Cup earlier this year so he does take risks. Horgan or Bowe - it's a toss up and the same for Flannery and Best. If O'Leary was fully fit he'd get scrum half but Reddan will get the nod on fitness - though hardly on form. Is O'Driscoll fully fit? He didn't push himself against Canada. He would be a huge loss as Trimble is not international class and Horgan struggles in the centre.

P.S. Got most of these right - O'Leary is a shock but he must be fit and if so is a good choice. Best may be in as the token Ulster man (I'd marginally prefer Flannery for his spirit) and Quinlan is the old dog for the hard course.
Posted by Ardmayle at 4:15 PM

A new Shinnors show in the Wexford Arts Centre - featuring a triptych priced at €150,000, a record ask for the artist. The first impression you get when you walk into the shambolic gallery (no price list, unattended desk, poor lighting) is that Shinnors has gone abstract. The sections of lighthouses (the theme of the show) are depicted as black and white squares suggesting Sean Scully, an artist Shinnors claims to detest. There's more happening of course - check out the myriad flecks of colour that enrich both the black and the white. There's an occasional break from the severity of composition: a cat's tail, a sailor's shirt, and a ghostly nude, but the first impression endures.

Of the 8 pieces in the show only 3 had sold (and not the expensive one) the day I was there - a week after the opening. This is unheard of for Shinnors who always sells out. This can be partly explained by the location - an arts centre doesn't bring the big buyers - and by the recession. But perhaps Shinnors has pushed his prices just that bit too far and his buyers have cried enough.
Posted by Ardmayle at 8:43 PM