The Dark End of the Street 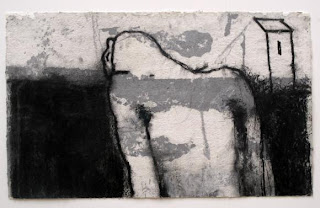 I've always been drawn to the darker side of art as any visitor to my house will attest. The current exhibition (Black and White) at the Oliver Sears Gallery takes me right where I want to be - to the dark end of the street. There is a hardly a dud piece in this outstanding show but the moody presence of Robert Motherwell's Elegy looms large over everything else. It lives up to Motherwell's own description of it as "a funeral song for something one cared about". See it and weep - then stay and admire the rest of the show. The other pieces that struck me were a small troubling Diane Arbus, an unusual black and white Hughie O'Donoghue, a gloriously explicit Picasso drawing, and an elegant, immaculately crafted Joseph Walsh table. The latter's order and decorum seemed incongruous amidst the brooding chaos of most of the other work.
Posted by Ardmayle at 11:10 AM

McGuinness is Good for You

I welcome the entry of Martin McGuinness into a presidental race dominated by media goons and political shills. At the very least he provides a radical alternative to the predictable views of the Labour and Fine Gael candidates. This country needs a new outfit – not a retailoring of the worn out Fianna Fail suit (take in the trousers, fix the holes in the pockets etc.). We all know that Fine Gael will not touch the bankers, and Labour will do nothing to discomfit the upper echelons of the public service. So combined in government they adhere to Fianna Fail policy on those rotten boroughs.

Fintan O’Toole (Irish Times, 20th Sep) joins the predictable establishment assault on McGuinness and certainly scores a point with his assertion about civilian casualties in the North. This may give pause to those who would point to War of Independence parallels and see McGuinness as a modern version of Michael Collins. But we must not forget the murky civil rights landscape in the North that was transformed following the activities of McGuinness and the IRA and the subsequent peace process he did so much to facilitate.

He may not win the prize but I suspect he will make it a far more interesting contest.
Posted by Ardmayle at 3:05 PM

- A perfect Auntie Marian moment on RTE1 this morning. During a discussion on Sarah Palin's alleged affair with a black basketball player one of her panel opined that you couldn't even call it an affair as neither were married at the time, so it was merely what people do before they get married (i.e. screw around). Finucane's response: "well what some people do".

- Demented polemicist and Bush lover Christopher Hitchens gets a fine skewering from Fintan O'Toole in today's Observer:
http://www.guardian.co.uk/books/2011/sep/16/arguably-christopher-hitchens-review-essays
He initially compares Hitchens to George Orwell and then proceeds to show the many ways he differs, including some ugly espousals of Enoch Powell's views on immigration and Empire nostalgic guff about the English language. He also scoffs at Hitchens' embracing of the US as the new Anglophone empire - replacing his beloved British Empire. Bracing stuff. Hitchens writes well, there's no doubt, but that's not enough to forgive him his unpleasant views.

- Beware all visits to the doctor. I ambled into my GP last Friday afternoon looking for a prescription to clear up a minor sinus problem. He did the usual tests and finding something a bit dodgy sent me to the nearest A & E for a few tests. Without boring you with the details (well let's say I don't recommend arterial blood tests), I suddenly found myself in the intensive care unit, wedged between a man evidently dying from cancer (and making desperate attempts to get out of bed festooned with drips and leads), and a young junkie suffering from a stab wound with a very uninhibited hawking habit. The reason I knew all about them was that only thin curtains separated us and the doctors made no attempt at discretion as they talked with them and about them. I managed to free myself the next day after a discussion with a very impressive consultant (tall, handsome, articulate, debonair and free from arrogance and bullshit - sounded English or maybe colonial). He told me the facts, and the odds, and left the decision up to me. 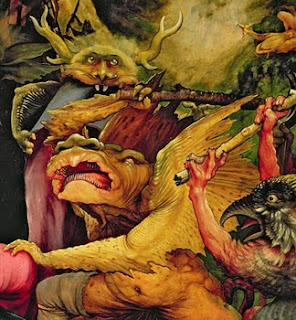 My late August tour de France was spoiled by a severe chest infection that rendered me incapable of enjoying the delights of the local cuisine and sampling the wines of the Bordeaux region. I limped home a few days early to lick my wounds – and to prepare emotionally and physically for the encounter in Croke Park. A heavy-duty dose of antibiotics renders you depleted for quite a time afterwards and in retrospect perhaps my social comeback at Croke Park came a bit early. I suppose I should have taken it easy on the drink. There were the two pints in anticipation of the game, and the three pints for consolation afterwards. And then of course a bottle of wine with dinner.

Anyway I woke Monday morning (after a restless night) very sick indeed and getting up was not an option. Nor was it an option on Tuesday: my sinuses were blocked, my throat ached, my head throbbed, my tongue stung with a spiteful ulcer, and a dodgy tooth added to my grief. Another sleepless night followed with the malevolent tooth reigning supreme. I managed to get an emergency appointment with my dentist on Wednesday. She declared I had an abscess and despite my equivocations decided she had to get to work immediately. This involved much digging deep amongst the nerves. Traumatic.

I resolved to get back to bed immediately but as I was out of reading matter I decided on a quick visit to Hodges Figgis in town. Coming out of the bookshop with the latest Franzen I began to feel decidedly light-headed. I hadn’t eaten a thing all day, nor even had a coffee, so I headed for Fixx on the corner of Molesworth Street and Dawson Street. I ordered a coffee and pastry and barely made it to a seat – so faint was I. The place was packed and I found myself perched between two burly middle-aged guys.

I was relieved I had made it without fainting but the fun was only just starting. I took a sip of the black coffee and a bite of a croissant and then seemed to slip into some kind of reverie. It was quite pleasant and amusing at first and I remember chortling a bit. Then very abruptly it turned very nasty and I recall being dragged backwards by some malevolent and implacable force – I was aware of two bright red orbs and also of the extreme frenzy that accompanied this undoubtedly terminal attack. Then nothing. I came around after I don’t know how long. My coffee was still hot but my two flankers had disappeared. I looked around - nobody seemed to have noticed my predicament. There was cold sweat streaming down my face, and horrible relatu, something luke-warm dribbling down my leg. The horror. Luckily I hadn’t drunk anything that day so the volume was low and my trousers were up to absorbing it. But how to escape. Should I call the staff and say I’ve had an accident. The right thing to do of course but the social consequences (a crowded city centre restaurant) far outweighed the harm an encounter with a drop of urine would cause their customers. Should I attempt to dab my seat dry with the napkins that abounded. I pondered awhile. It was raining heavily outside – in such circumstances a wet seat is not unusual. I rose quickly and shuffled out into the companionable rain. My car was nearby, thankfully, I judiciously placed a plastic bag on the front seat and struggled home. Into the shower and back to the bed again - with what's proving to be the excellent Franzen novel.

I may get up tomorrow.
Posted by Ardmayle at 6:17 PM

Tipperary were a disgrace. From the first whistle they allowed themselves to be physically intimidated by a fired up Kilkenny team. The extreme laissez-faire attitude of the referee aided Kilkenny's tactics. That malign homunculus Tommy Walsh was so busy hitting everyone within reach that he democratically included the ref himself - whose smashed nose caused a lengthy delay but resulted in no attempt to impose a bit of restraint on the brute physicality that prevailed. But Kilkenny didn't just win the physical exchanges, they won the tactical battle as well. They allowed Tipp no room to develop their elegant attacking gambits. They hustled and tackled with more intensity, and seemed to win all the fifty fifty balls - the spring-heeled hatchet man Walsh excelling in this area. They were just plain hungrier and that can't be summoned up from the sideline. At no stage did I feel that Tipp could win and so left the ground disappointed but with no sense that we deserved anything better. I'm sure as the team scatters to Thurles, Toomevara, Mullinahone and the more bucolic hamlets everyone of them is feeling the remorse of not doing himself justice. Ryan must take some blame also. It was obvious this whirlwind was coming and his men seemed ill-prepared to counter it.
Posted by Ardmayle at 6:34 PM

Cody wants this one so badly he can taste it. It’s visceral. And a win alone will hardly suffice. He wants to slaughter these upstarts. They had the temerity to halt the run of the greatest team in history. He burns to show that last year was a mere aberration, due mainly to King Henry being hors de combat. He also wants to deal with the heresy that Kilkenny are being supplanted by another great team, or even, whisper it, a greater team. Then he can retire with an impregnable reputation.

But he is taking a gamble with his legacy, he could have retired in glory last year. If Kilkenny lose again this time it will take some luster off their reputation (and his) and people will begin to speak of Tipp in the exalted way they had been speaking of Kilkenny. ("That was a great Kilkenny team but not a patch on the Tipp team that followed them.") So pay attention Declan Ryan in Clonoulty. They will come at you like a whirlwind in the first quarter and if you don’t withstand them you are doomed. Start like you did against Dublin and you are truly doomed. And keep the bloody ball away from Tommie Walsh. And please bring on Brendan Maher earlier this time.

This young and still improving Tipp team have matched Kilkenny in the last two All-Irelands. Two years ago they realized that Kilkenny are not unbeatable. Who will be more motivated? Cody and Kilkenny raging against the dying of the light, or the new kids on the block full of confidence and still retaining an edge of bitterness about the one that got away two years ago.

I think that Tipp have grown into a great team and that they will prove it on Sunday. But it will be close. A few bob on the draw at 11-1 mightn’t be a bad idea. But Tipp to win the replay!

Post script: The forecast rain may suit Kilkenny better. Maybe I should take that 6-4 against Kilkenny offered by Paddy Power as insurance.