This was one that got away. If only, if only, if only. If only the French referee Christophe Berdos had the moral courage to give a red card to Berger for the most blatant piece of eye gouging I've ever seen in a rugby match. (By the way, contrast the lack of repeat showing of the incident by SA TV with Sky's public hanging of Alan Quinlan in the Heineken Cup.) If only the TV replay had given a clearer view of the scorer's trailing leg for SA's marginal last try. If only Ronan O'Gara had jumped for that fateful ball like a man rather than backing into it with eyes closed like a big girl. (OK, OK, the sun may have blinded him.)

But you know beyond all this lies the thought that SA are that bit more brutal and just don't countenance losing. They take physical commitment to a level that our boys just will not entertain - and rightly so. The SA attitude is encapsulated in their coach's refusal to see anything wrong in Berger's actions. He will be suspended, I suspect for a very long time, but that's too late for the Lions.
Posted by Ardmayle at 3:57 PM

The Lions - a Progress Report

Don't be fooled by how close the Lions got in the First Test. South Africa took their foor off the pedal and replaced some key personnel. Also, the Lions were appreciably fitter due largely to having had more competitive action. South Africa will be fitter and forewarned for the next Test. They have two key advantages, their forwards are more powerful and more evil, and they are better at kicking for position. Stephen Jones is past his best. His distribution is sluggish compared to O'Gara's and he can't kick as long as Hook. This is a fatal flaw in the team. The South African forwards will dominate the Second Test and the Lions backs will live on scraps. This brings us to another fundemental flaw in the Lions team, Paul O'Connell should not be captain. He is no Martin Johnson, he's not mean enough. He is an NCO rather than an officer. It's clear that McGeechan made a mistake in not making O'Driscoll captain. He has that mean streak (yanking at Gavin Henson's expensively coiffured hair and snapping: "How do you like that, you cocky little fucker.")and that fanatical will to win that eludes O'Connell. I'm not sure that it would affect the overall result but it would have brought the Lions closer to SA.
Posted by Ardmayle at 11:32 AM

Ry Cooder at the Olympia

I don't care that he's a white boy, he's still the greatest slide guitar player in the universe. Himself and his old sidekick Nick Lowe were in fine form - running through Ry's back catalogue and adding a fair few that were new to me. Ry wore a wooly hat, his trademark Hawaiian shirt and extraordinary goofy glasses - he's no longer going for the handsome rock star look obviously. He is beginning to resemble some of his grizzled old musical heroes.

Cooder's guitar can transform the most unlikely material - he did a haunting version of the old Jim Reeves song "He'll Have to Go". But there wasn't a false moment. I noticed Brendan Gleeson nearby drinking his Guinness and enjoying the music.
Posted by Ardmayle at 9:33 PM 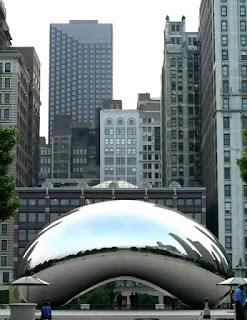 My first trip to Chicago - a solid city that looks after its citizens. You can't but be impressed by the amount of outstanding public sculpture including a giant Picasso, a Miro, and a huge Chagall mosaic. There are plenty of playful pieces also that are clearly enjoyed by the people out for their weekend walks. There's the giant reflective bean by Anish Kapoor that catches the spectacular skyline and the fountain spewing water from the mouths of changing images of Chicago citizens. Add in the Art Institute with its wide-ranging permanent collection (Hopper, Van Gogh, Rothko, Seurat, Gaughin, and even Remington's paintings of the old West) and you get one of the best art destinations in the US.

The blues festival is entirely free. There were four or five venues going non-stop from early afternoon to late evening over three days. All courtesy of the city and its mayor, Richard M. Daley. All the venues had his name emblazoned over the stages. Who's your daddy. It was well policed and attended by a huge good-humoured and heterogeneous crowd. There were food and drink stalls, loads of toilets and a huge support team to organise the crowds and the traffic. (Lord Mountcharles take note.) 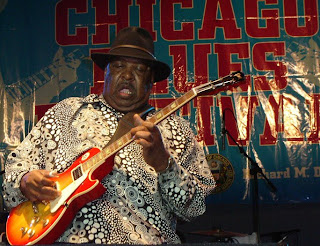 I hadn't heard of most of the acts but they were unfailingly excellent. The highlight was probably Magic Slim and I enjoyed Lurrie Bell and Jeremy Spencer as well. Magic Slim was a truculent looking old buffer (and far from slim) with a missing little finger (severed by a cotton gin apparently) but he made his guitar sing. He was helped onto and off the stage but once there commanded his band with good old-fashioned autocratic hauteur.

For those who liked it a bit more lively Lil' Ed with his fez and his Chuck Berry sound got the people bopping. Late on Sunday Jeremy Spencer did a set that was redolent of the old Fleetwood Mac, before they became a Californian pop group.

Moving around Grant Park over the three days of the festival you couldn't but be struck by how well-behaved and relatively sober the crowds were. And how you had every class of citizen from the professorial to the janitorial. Would we be able to do the same thing in the Phoenix Park? Would you get the same mix? I doubt it. It would be dominated by hordes of marauding cider heads and the older citizens would give it a miss.
Posted by Ardmayle at 10:19 PM

Do we really care about the life of Lord Alfred Douglas? Oscar Wilde's nemesis did little interesting after carelessly ruining his friend. He wrote a number of exceedingly precious sonnets none of which were memorable, he developed an unfortunate appetite for litigation that ended in tears and jail for 6 months, and he even got married to a rather masculine looking woman. Murray's book takes a more sympathetic stance on Bosie than Ellmann does in his definitive life of Oscar Wilde.

It was extraordinary the sense of entitlement young aristocrats had in those days. He was always angling for an annuity that would keep him in the manner to which he was accustomed - and eventually got one from Shaw's widow. The notion of work was alien. He claimed to like pretty young boys and only succumbed to Wilde's grosser charms because he was a famous writer. And even then was very keen to establish the limited nature of their physical contact.

Far from being the effete figure he is often depicted as, Bosie was a keen angler, an excellent shot, and at one period he successfully trained racehorses.

The most remarkable thing about this book is that Murray started writing it when he was fourteen - and finished it when he was twenty. Precocious or wha'.
Posted by Ardmayle at 3:33 PM

A very fluent performance by Schama facilitated by Fintan O'Toole. You can see why the BBC paid him £3 million. He gave an amusing and illuminating perspective on American history unaided by any notes for about half and hour, before he started a rather po-faced dialogue with O'Toole. It was interesting to find out that Arlington cemetry was built on Robert E. Lee's garden. He is a keen admirer of Obama - particularly the way his world view is informed by a sense of history.

The one false note was when a venerable old dear asked him a question about the Israeli lobby in the US. He scoffed at the idea that any such monolithic entity existed - suggesting instead that there were conflicting Jewish views on Palestine and that this was typical of the Jewish liking for disputation; cracking a joke about the two synagogues on a desert island to illustrate this lovable trait. He described himslef as an "old Labour zionist" who favoured a two state solution in Palestine. Before this he had a go at the Taliban (and their hatred of writing and education) and the Wahhabis. Fair targets but dragged in perhaps.
Posted by Ardmayle at 2:30 PM

Antony and the Johnsons at Vicar Street

What a strange androgynous blob of a man, but amiable with it, and what a heavenly voice - the body of a Caliban and the voice of an Ariel. He was wearing some weird voluminous black toga over his trousers. I expected some posturing arty band but instead he was accompanied by a very sober and serious collection of musicians incuding a severe lady cellist, a violinist, and a sax and clarinet player. The show was preceded by a dance piece where a lithe lady dressed in paint and little else threw angular shapes to some electronic music. It worked for me.

Antony's haunting and pellucid voice means you don't really notice the banality of his lyrics. The voice is so evocative that the words are irrelevant. And the band were stupendous. Antnony's patter slightly deflated the mood as he banged on about the superiority of the female - but it was hard not to like his shtick.
Posted by Ardmayle at 2:25 PM

Vincent O'Brien died today - Ireland's greatest racehorse trainer and probably the greatest racehorse trainer in the history of the universe. He mopped up all the great National Hunt races (3 Gold Cups, 3 Champion Hurdles, and 3 Grand Nationals) before becoming Ireland's first great flat trainer - winning Derbies and Prix de L'Arcs. And he certainly was responsible for the replacement of the aristocracy by the meritocracy in that particular profession. But not before a bitter feud with the Irish Turf Club when he was banned on spurious grounds for over a year.

I first came across Vincent O'Brien unknowingly when I walked across the Curragh plains in 1953 with my mother to watch the Irish Derby. Chamier trained by O'Brien and ridden by Bill Rickaby finished second but was awarded the race on a disqualification. My mother put a shilling on for me at 8-1, thereby sowing the seeds of a lifelong interest in the horses. Being a sanctimonious little prig in those days I used my winnings to buy plaster statues on the Blessed Virgin and the Sacred Heart.

Nijinsky was his most famous horse although I always had a soft spot for the incomparable Golden Fleece and for the battling qualities of Sadler's Wells. O'Brien was a class act and he stood by the old rogue Lester Piggot when he had that spot of bother with the English revenue commissioners.
Posted by Ardmayle at 8:48 PM