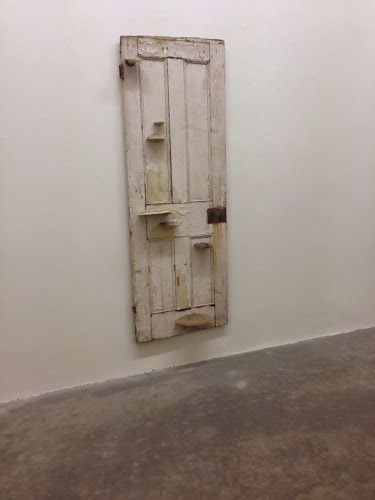 Dorothy Cross is much possessed by death. Back in her udder days, the artful arrangement of bovine parts was overshadowed by your awareness of being in the presence of dead creatures. Then came the sharks (what is it with artists and sharks?), the snakes, and the odd deceased gannet. Her striking Ghost Ship lingers on in prints. At View, an exhibition of new work in the Kerlin Gallery, this underlying bass sound can still be heard. This time, in addition to a shark, we get escalation in the form of a human skull - cleft in twain to act as a repository for tiny meteorites - themselves the remnants of dead stars. There's also a door that has obviously had a hard life. It's a dead door, worn out and redundant.

Cross's career is very much alive however. This exhibition of sculptures and photographs coincides with her major new commission, the cryptic Eye of Shark at Lismore Castle Arts in Waterford. This site-specific project will be followed by Trove, an exhibition of works selected by the artist from the National Collections of Ireland, at IMMA in November.

Posted with Blogsy
Posted by Ardmayle at 1:47 PM

You've got to laugh at London-born John Michael McDonagh's criticism of the quality of Irish-made films. This is the cinematic genius that gave us Calvary - a film more full of Oirishry and Irish stereotypes than Darby O'Gill and the Little People - and about 10 years out-of-date with its depiction of the Church. Only an olympian performance from Brendan Gleeson saved it from more general ridicule.

And by the way we do over-hype our own films. Even the saintly Michael Dwyer was guilty. I remember him singing the praises of High Spirits - one of Neil Jordan's many turkeys. But McDonagh is the wrong person to point this out after venting such a steaming pile of excrement on us.

The Bearded Lady and Me

I arrived in London one summer in the late Sixties hoping to get work on the building sites. Work was hard to come by that year and I found myself in Putney living on a diet of drinking chocolate (purloined from Thomas Nelson) and cucumber - sharing a tiny bed-room with my equally impoverished buddy Jim McDonald. Giving up on the labouring we decided to put our education to some use by applying for temporary office jobs. We had modest success, getting a day's work here and there manning the post room for Thomas Nelson the publishers and stuffing vouchers into Embassy cigarette boxes. Occasionally we'd get work together but more often we'd head off separately. One day we got a request to go into this office off Park Lane to man a desk while the company moved premises. I would work the first shift and Jim would do a later one.


I turned up at the appointed hour and was met at the entrance by a very friendly American man who chatted away about Ireland, he knew Cobh well, and seemed in no hurry to send me about my business. Eventually he told me to report to the 2nd floor where a Miss Finch would explain my duties. I took the lift up to the second floor and there were two young women sitting around in the reception area. The dark-haired of the duo got up and left as soon as I arrived and the blonde turned around and rose to greet me. She was tall and good looking with a very shapely figure. However, my attentions were firmly focused on her beard. She had a luxuriant goatee-style beard that matched exactly the honey blonde of her coiffured hair. I concealed my wonder as best I could - having encountered much that was weird and wonderful already in London during that swinging era. She explained to me that I had to sit at the desk while the rest of them were moving and take any messages from people who arrived. She also explained the switchboard to me but reckoned that I shouldn't receive many calls as people knew they were moving. She seemed pissed off when I mentioned that my friend wasn't going to turn up (he'd received a better offer) but said we'd manage.

About 15 minutes into my stint a short tubby man came bursting in to the office clearly agitated and in a hurry. "Where's Miss Finch, where's Miss Finch" he panted. I explained she was downstairs organising the move and offered to help him. "I have to deliver this parcel" he said, indicating a large rectangular package he had under his arm. "I'll pass it on to her" I offered in my most professional office boy manner. "No, No" he replied, "I have to hand it to her personally". "I'll go downstairs and find her. What does she look like?" "Well", I replied. "she's about five feet nine with blonde hair and she's in her late twenties". Some impulse towards sensitivity and decorum caused me to omit any mention of the beard.

About five minutes later he returned saying he couldn't find her. He then asked me in a pointed way that made me vaguely uneasy "was there anything in her appearance that would help me recognise her?" This was so pointed that I decided to fess up. "Well actually she has a beard", I replied with a guilty smirk. At this he got very angry telling me to stop messing him about, he was a busy man and so on. "No, no" I protested, "she actually has a beard". I eventually mollified him and we began discussing what kind of creature she could be. As we were indulging in this inglorious speculation, Miss Finch suddenly stormed in the door shouting angrily "how dare you talk about my beard, and I've just had it done for a party tonight". Oh dear. With that the messenger and Miss Finch kind of loomed over me in a alarming fashion - leering it seemed. Then I heard the immortal line "smile, you're on Candid Camera". Afterwards I was debriefed for a bit, they couldn't understand why I hadn't mentioned the beard in my initial description. The only rationale I could offer was that it was a tactful omission - good taste would not permit me to mention such an outlandish attribute. They assured me, by the way, that the beard was genuine. They got me to sign a disclaimer and off I strode into the West End - bemused.

A few months later I had returned to Cork and we got an excited call from an aunt in Dublin: "I think I've just seen Johnny on Candid Camera." We didn't get Granada in Cork at that time so I never got to see my ignoble TV debut.

Posted with Blogsy
Posted by Ardmayle at 3:27 PM