Lace, Paint, Hair at the NGI 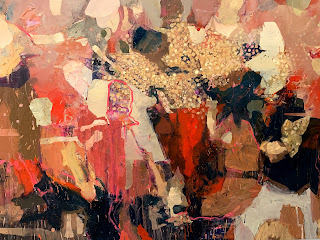 An edited version of this review appeared in the Sunday Times Culture magazine on 6th September 2020.

The National Gallery of Ireland is back up and running – just remember your face mask. It’s operating a one-way system so you enter at Merrion Square and exit on Clare Street. Lace, Paint, Hair features three artists, Fiona Harrington, Cian McLoughlin, and Eimear Murphy, who have made “significant contributions” to the NGI’s public programmes in recent years. The opportunity to showcase their work in our national gallery is a handsome quid pro quo for these young artists. McLoughlin already has a permanent place in the NGI with a self-portrait in the National Portrait Collection (located nearby and always worth a visit). The title of this new show refers to the medium used by each artist. All of the exhibits were created during the lockdown and according to the attendant press release represent the artists’ responses to this modern plague. McLoughlin’s two pieces, Crowd 1 and Crowd 2 (see image), are part of a series however that predated the pandemic and originally explored the theme of crowd behavior – how we abandon our individualism and cohere to the energy of the masses. Now of course this coherence acquires a new and sinister import. A crowd becomes a dark and dangerous place. The swirling colours, flesh tones, blood-red threads, and ominous blacks all contrive to warn us off. Fiona Harrington’s hand-made lace works are suggestive of our fragility in the face of this deadly virus. This vulnerability is made explicit in Fragile Economies where she has attached her delicate and exquisite lacework to a series of halved eggshells. There is also a resonance in the title of the history of lace-making where poor women laboured so that rich ones could look good. Hair was an issue for many during lockdown, especially I suspect for women. Eimear Murphy’s Hair Correspondence was created by gathering hair from 65 people she contacted via social media  – evidence perhaps of widespread amateur efforts. She wove the hair together to create a large relief drawing that will give viewers an opportunity to exercise their imaginations. It’s a kind of Rorschach test. Murphy’s other works display the mundane detritus of every day life suspended in cast tablets. An anticipation of what the future archaeologists will gather to tell about how we lived. Murphy shows her versatility with materials in the form of a large charcoal drawing showing rock and concrete suspended in a fictional moment.