A Matter of Fundamental Importance (Look Away if You're Squeamish)

These days the medical establishment's approach to cancer is catch it young.This means that even the vaguest indicator sees you hauled off iimmediately for extensive tests, whereas in the past most of us were left to reside in blissful and often fatal ignorance. Many of these tests are hard to approach with equanimity. Top of the the trepidation list, even outranking the prostate test, is the prospect of a colonoscopy. An ugly word for a seemingly alarming procedure. Sending a camera up your arse is not something you can look forward to. It's going to be painful surely and undignified assuredly. Men in particular, unused perhaps to people fiddling around in their nether portions, seem to dread it. I know I did.

My great age or my family history (father died of colon cancer, sister nipped it in the bud) made me a target of BowelScreen an admirable national programme for catching this lethal and common cancer in time to treat it. So after a problematical symptom following BowelScreen's initial test (don't ask), I find myself in the Endoscopy Unit at St. Vincent's Hospital starved and nervous - awaiting my maiden colonoscopy. Apart from the dread of the impending operation, there's also the uneasy feeling that there may be some very bad news after my depths have been plumbed. Starvation is no doubt feeding my morbid thoughts. In the past 24 hours my only food or fluid intake has been two litres of drain cleaner - some sickly sweet fluid designed to scour your large intestine. It works with lethal efficiency - ensuring you don't stray far from the bog. Fun times.

The staff operate as briskly as Albert Pierrepoint was wont to do. Upon arrival I'm given a backless gown and a rather fetching pair of grey paper shorts.Then I'm brought into the theatre with its array of sinister machines. I lie down and am hooked up to a drip which will provide me, I'm told, with a sedative and a pain-killer. Nice. I encourage the doctor to hit me hard. Still alert I'm told to lie on my side and tuck my knees up under my chin. Let the games begin.

I'm conscious of my shorts being lowered and my sacred rectum being anointed with copious amounts of something gloopy. And then a gentle broaching of my puckered defences. After that nothing. I come too in the recovery room where a noticeably toothsome female doctor tells me I'm in the clear and fetches me a nice cup of tea with some brown bread and jam. Delicious.

Posted with Blogsy
Posted by Ardmayle at 3:37 PM

The Nerve of It

My parents were born in an era where taking care of your teeth meant placing them in a glass of Steradent at night. Their laissez faire attitude towards dental health meant that their children didn't receive the regular check-ups that are the norm amongst the middle-classes these days. We attended the dentist only when in acute pain or following some accident. Our life in those days revolved around Collins Tennis Club and it so happened that a friend of the family from the club was studying dentistry. When dental emergencies arose we were dispatched up to the Dental Hospital where he and his colleagues got to practice on us. After our friend qualified and began charging I continued to go to the Dental Hospital rather than impose on the poor man's fledgling business. A piece of sensitivity that was to be my downfall.

Due no doubt to a love of Gifties and Sailor's Chew my teeth in general were in poor condition. One of my molars was a shell of its former self and began to trouble me. When I presented at the Dental Hospital I was informed that I'd need a root canal procedure to rescue the ravaged tooth. (As I write these words I wince and am taken back to that traumatic day.) This involves removing the nerve and putting in a metal stake to support the dead tooth. To remove the nerve the dentist inserts a little corkscrew into the deadened nerve and drags it out – like a cork from a wine bottle. Except that the little piece of pink gristle in question is acutely sensitive. Those who saw Laurence Olivier in action in Marathon Man will have a vague idea of what's coming. The student working on me was a rodent featured dark-haired girl with thick glasses and a thin moustache. She was an amiable creature and explained the process to me before she began. I'm not sure that I needed the detail about the corkscrew but anyway I trusted her to deliver me from the evil of any pain. She began her ministrations by giving me a number of injections to freeze my gums. Then having given it time to act she got out her drill and proceeded to expose the condemned nerve. So far so good – I felt a few tingles but nothing a butch young fella couldn’t handle. Having exposed the nerve she got her little corkscrew and began to insert it. She didn’t get very far. I let out a ear-splitting roar and jumped straight out of the chair. The intensity of the pain was beyond description. Forget child-birth, forget kidney stones, forget broken arms or legs – this was sharp, piercing, and excruciating. The dopey mouse-faced creature had frozen one tooth and operated on the adjacent unfrozen one.

My roar alerted her tutors and superiors and soon I was back in the chair with an excited group of spectators surrounding me. My torturer was on the fringes looking only marginally less upset than me. A very large bearded red-haired man – evidently the professor – took charge. He peppered me with further injections and covered up the incorrectly exposed tooth, all the time hectoring his fascinated charges. I was sent on my way without the intended operation taking place. These were the days before post-traumatic stress and counselling so I went home after receiving a cup of tea and a biscuit. My shocked parents received the full blast of my reaction and to their credit were galvanised into action. They arranged for me to attend a real dentist where the criminally abused nerve was removed under general anaesthetic. More than forty years later I can still experience a shadow of the agony of that day every time I think about it. I often wonder what happened the student who so abused me. Did she find a niche elsewhere in life following this devastating experience, or did she become one of the most careful dentists practising in the country due to her formative encounter with my nerve. If there is such a thing as eternal recurrence, as Nietzsche suggests, I will opt out thanks.

Posted with Blogsy
Posted by Ardmayle at 12:01 PM

Eoin McHugh at the Kerlin - the skies will be friendlier then 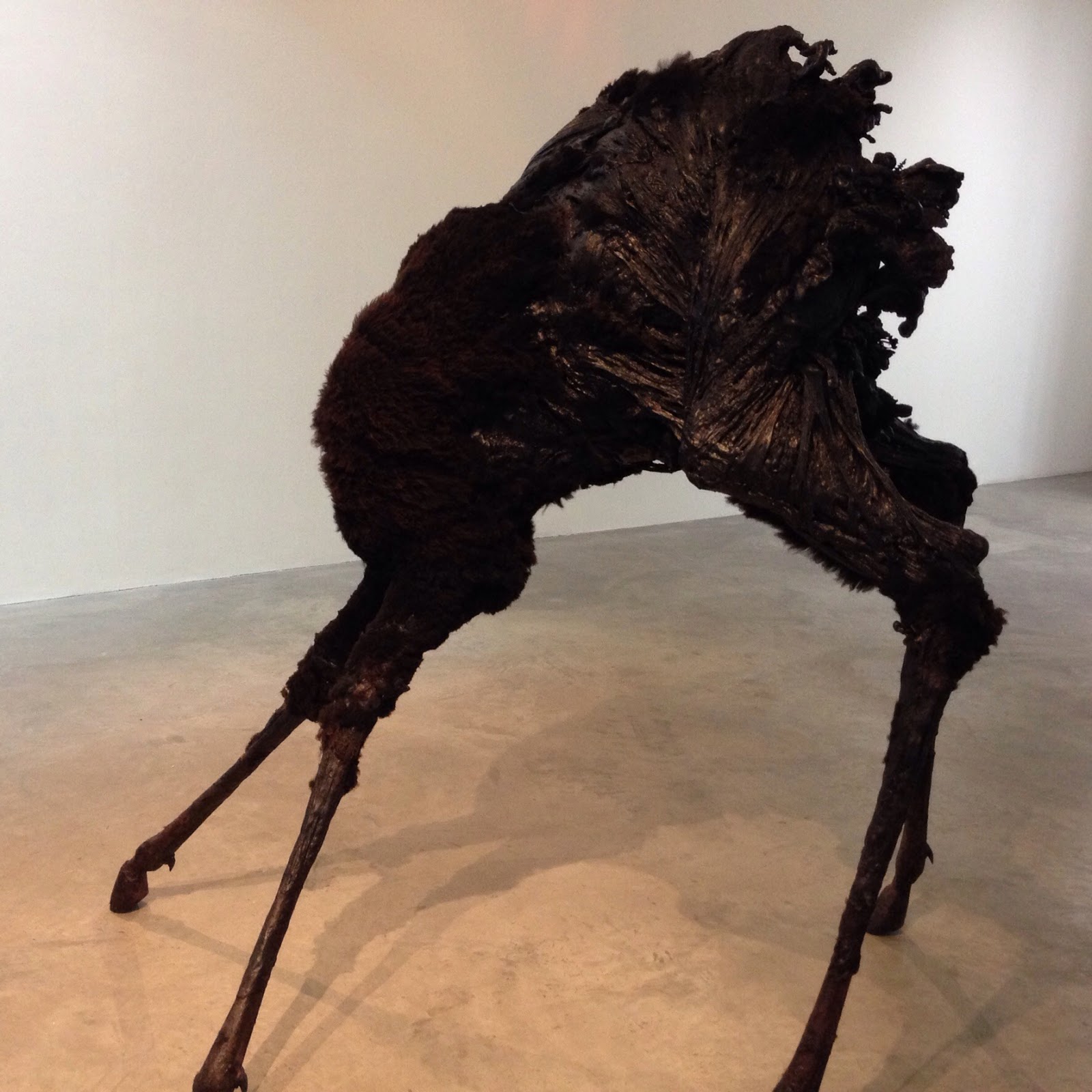 Eoin McHugh is one of the most original of the younger generation of Irish artists. While his work may be underpinned by psychological theory you don't need to know your Freud from your Jung to appreciate it. The dark headless beast that confronts you when you enter the gallery was conceived as a monument to fear and neuroses. Its sources include the vagina dentata, Heaney's Great Elk and the horse Nietzsche embraced as he suffered his breakdown in Turin. The cunningly-lit silver figure of Little Hans nearby, which provides a dramatic contrast in scale and tone, is named after the subject of one of Freud's most famous case studies. Two of the works are giant collages made up of classic Persian and Turkish rugs intermingled to create a new striking synthesis. Two oils feature a woman in a foetal position suggesting the hysteria that was a all diagnosis in early psychoanalysis and a colourful homage to Rorschach's projective testing. But never mind the psychology, feel the wit of this startling and inventive show.