Who Breaks a Butterfly upon a Wheel?

Can you believe all the sanctimonious shite written about Russell Brand and Jonathan Ross. So they rang Andrew Sachs and inferred, OK stated outright, that Brand had slept with his grand-daughter. So bloody what. If I had a grand-daughter who hawked her wares in a group called the Satanic Sluts I would just be grateful that she hadn't slept with Beelzebub. Their little squib wasn't particularly funny, and it certainly lacked wit, but the current fuss is quite disproportional. Look to the obscene machinations of the financial institutions if you want to be shocked.
Posted by Ardmayle at 5:45 PM

The RHA in Ely Place is a fine venerable old institution - long may it thrive. It's a great space, very accessible, and has lost a lot of its traditional fustiness. Ok, the members still have to don their anachronistic drag on special occasions but they are a younger brighter bunch, full of fresh initiatives - eduction, life-drawing, innovative shows etc.

However, there is one serious blot on its escutcheon. The annual open submission show, once a wonderful platform for up and coming and established artists, has become increasingly difficult to get into. Perhaps this is because the age profile of the academicians has decreased and these younger guys are more prolific than the earlier generation. The members of the academy are entitled to enter up to 10 pieces each (could be a couple out here??) and if this allotment is taken up it doesn't leave a lot of room for outsiders. If you add the number of distinguished invitees (Shinnors, Teskey, McSweeney etc.), the chances get even slimmer. So isn't it time there was another Living Art Exhibition or equivalent open submission show to cater for the large number of applicants with nowhere to go? Come on Robert Ballagh get organising. And isn't it just a tad dishonest of the RHA to take €15 a painting from those optimists who continue to submit work. A couple of thousand do so very year - someone suggested that 4,000 did this year but I find that hard to credit.

The RHA should really issue a health warning to artists saying that those who apply are unlikely to get in. But of course that would remove a nice little revenue stream from an admittedly cash-strapped organisation. But should they be subsidised by the equally cash-strapped artists of Ireland?

And the selection process seems so random these days. A prize winner from last year has failed to get in this year. Someone who got in for 10 years on the trot suddenly doesn't get in for 2 years in a row - and so on whimsically.
Posted by Ardmayle at 5:46 PM

Listening to that risible old fraud Mary O'Rourke on Newstalk this morning I was so overcome by the odour of sanctity that I fair felt my gorge rise. She was defending Fianna Fail's volte face on medical cards for the over seventies by claiming that this would remove the likes of High Court judges and medical consultants from the scheme.

What she failed to mention was that the means test devised for the new measures also removes the large number of people in the private sector whose pensions have been ravaged in recent times. The bar has been set a few euros above the state pension. This means that if your much reduced personal pension gives you an extra €100 a week say, you will not get the medical card. A further crushing blow to all whose pensions disappeared as a result of world-wide financial chicanery. Of course those in the public sector are protected from these chill financial winds by their index linked pensions - these include Mistress Mary.
Posted by Ardmayle at 11:48 AM

The Heineken Cup is bubbling up nicely and there are a few tasty matches to look forward to this weekend, especially Leinster at home to Wasps and Munster away to Sale. On the evidence of last weeks matches you'd worry about Munster heading their group. The addition of a few tasty backs has them thinking they're French. They have begun ignoring their core values - kicking for territory and grinding wins out through forward possession. Also, they will surely not get an away bonus point against Clermont like Sale did. Sale of course are hot at the moment and as the season progresses things may change. However, Munster will do well to escape with a losing bonus point this weekend.

Leinster are so brittle that you don't know what to expect. How could they lose to Connacht? However I suspect that they will beat Wasps narrowly - the consequence of them losing would be dire. Overall I would narrow down this years Heineken Cup to Stade Francaise, Sale and Wasps. You can get 16-1 against both Sale and Wasps with Paddy Power, and 11-2 against SF. This might be a good time to have a bet. I think that the 6 group winners will be Sale, Wasps, Leicester, Stade Francaise, Toulouse, and Gloucester, with Perpignan and Cardiff Blues qualifying as best losers (they both have Italian cannon fodder in their groups). Oh and Munster to win the Magner's League.
Posted by Ardmayle at 8:49 AM

Indigestion after a Feed of Bacon 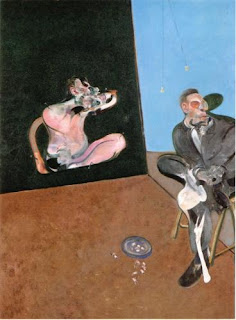 In London last weekend for a cultural expedition, three art shows and a West End play on the agenda: Francis Bacon at Tate Britain, Mark Rothko at Tate Modern, an Irish art show at the John Martin gallery, and a play (Riflemind) directed by Philip Seymour Hoffmann over which I will draw a veil..

Bacon for breakfast on Saturday morning. I have always empathised with Bacon: admiring his dedication to the bohemian ethic, and sharing his life-long weakness for gambling. But I'm not sure I fully bought into his artistic reputation. This show pushed me over the edge. Each painting is a full frontal assault - showing you the reality lurking behind the painted veil. You marvel that such a camp and mincing creature could produce such powerful, visceral and nihilistic images.

The chronological layout is revealing: the artistic concerns map onto the biography. So much to confront and a wealth of incidental detail. The large triptych of the crucifixion has a swastika on the arm of  one of the thieves - its only appearance in Bacon's work that I can recall. Some of the most powerful work is inspired by the tragic and conflicted George Dyer, usually adorned with random splashes of white paint.

There are curiosities: a benign Pope Innocent X with his mouth shut, a couple of broody landscapes and a strange abstract stylised crucifixion.

I then head across the river by boat to Tate Modern - a fresh perspective on London's architecture. It's Saturday afternoon and the gallery is jumping. There are queues into the first Rothko room. It's a disaster. You can't view Rothko with large crowds milling around. His work doesn't give itself up immediately like Bacon's - you need to spend time with each work to absorb it. And in this space with this crowd it's just not possible. Also, there are too many paintings to handle - quantity diminishes the impact. The four large works that normally hang permanently in Tate Britain can be viewed in tranquility away from the hype and crowds associated with a big retrospective - this is the only way to encounter Rothko. His art needs peace and space and time for the imagination to engage - unlike Bacon's, which leaves nothing to the imagination.

Bacon, incidentally, had no time for Rothko,  or abstract expressionism in general.  In an interview with Melvyn Bragg he excoriated Rothko and was particularly dismissive about his use of maroon, a colour he apparently despised. But visual artists are notoriously critical of their peers - unlike writers.

Our third show was a visit to the admirable John Martin gallery in Abermarle Street (near Picadilly). This featured some good Martin Gales (all sold), some formulaic Shinnors (all sold) and some very weak Sean McSweeney's (all unsold). The market for Irish art has become more sophisticated and discerning.
Posted by Ardmayle at 5:54 PM