Napoleon the Great by Andrew Roberts 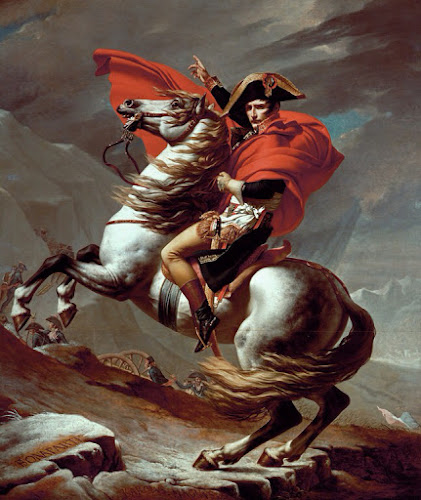 It's hard to think of a historical work that I've enjoyed as much as this 2014 biography of Napoleon by Andrew Roberts. It helped that my ignorance of the details of the great Corsican's life made it more like a thriller than a history book. It's well-wrtten too and not burdened by academic up-its-arseness. It's clear that Roberts is an admirer but it never strays into hagiography and he casts a beady eye on such incidents as the massacre at Jaffa and the precipitous execution of the Duc d'Enghien. There's a tad too much detail about his many battles for my taste but the book is excellent on the manoeuvres of the various players on the European stage and the shifting alliances. Russia is in Prussia is out. Prussia is in Russia is out. The Brits are consistently out and worried mainly by Napoleon's trade embargoes. The rot for Napoleon started with his badly managed Russian campaign and culminated at Waterloo when they all ganged up on him. Unlike 20th century dictators Napoleon brought order, civic codes and processes, and civilisation to the areas he conquered and was a generous supporter of architecture and all the arts (and a looter of other's treasures it should be said). He was an indefatigable letter writer and Roberts is the first historian to have had complete access to his entire output. The result is a lot of intimate detail. His romantic interests were never confined to Josephine (and her bad teeth) and throughout his life he enjoyed the attentions of actresses and singers as well as those of his wife. Josephine was eventually dumped for a strategic marriage with a Prussian princess. Even in the midst of battle he liked to enjoy the company of his latest lady friend. He is portrayed as a man who worked hard, encouraged promotion based on merit, and was extremely courageous. His troops loved him for the way he moved amongst them easily. His ruthlessness isn't ignored either and the way he supplanted the post-revolutionary leaders was a masterclass in political manoeuvring. The dying fall of his life on St. Helena is covered in all its poignant detail as he pottered amiably about his remote prison - charming most of those with whom he came into contact. It's a riveting read really. France could do with him today.

Posted with Blogsy
Posted by Ardmayle at 3:35 PM 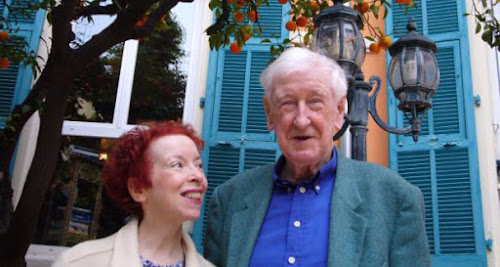 John Montague is well into his eighties now and his public appearances in Ireland have become a rarity. He spends most of his time in the kindlier climes of Nice and only returns to his West Cork house during the summer months. He's inclined to sleep in the comfort of a B&B in Schull and use his house near Ballydehob to work and to organise his archive. Anytime I have seen Montague in the last 20 years his current partner has been pretty much welded to his side. She's a diminutive and rather intimidating American woman called Elizabeth Wassell. She's quite extraordinary looking: a tiny figure with great watchful eyes, a lubricious mouth, and a tight skull cap of dyed red hair. She's something of a novelist in a minor key but her role in life is clearly to minister to the great poet and control access to his presence.

I have bumped into Montague from time to time over the past 40 years. He was a lecturer n the English department in UCC while I was a student there. I remember him bringing a sexual dimension to Wordsworth's poetry that caused some fluttering in the dovecotes - especially in the serried ranks of nuns. Montague found Wordsworth's Nutting a particularly juicy source of speculation.

Through beds of matted fern, and tangled thickets,

Forcing my way, I came to one dear nook

Montague mingled with the students socially and particularly with the College poets including Sean Dunne, Theo Dorgan and Greg O'Donoghue. I'd often see him in Henchey's pub in St. Luke's with Sean Lucey, the Professor of English - a charming man whose life sadly went off the rails later.

Montague's arrival coincided with my last year in UCC and I moved on with my gentleman's degree in English and Philosophy. I didn't encounter him again until about 20 years later when I was staying in D'Arcy's B&B in Wellington Road in Cork - a raffish venue much favoured by artists and writers. I was informed when I checked in that Montague was in the next room to mine - Claire D'Arcy assumed correctly I would know him. There was no sign of him that evening but after I returned from having a few pints with my old buddy Maurice Desmond in Henchey's it became clear that he was back in his room. The next morning we went down for breakfast and the bould Claire marched us straight over to Montague's table so we could breakfast together. Montague was as courtly as ever and introduced us to the new girl friend Elizabeth. We discovered at breakfast that we were both heading to Skibbereen for an art exhibition so I agreed to give them a lift. He was waiting for me on the steps outside at midday - sitting in the sunshine reading to his new girl from the collected poems of Thomas Hardy. Nice. We enjoyed a pleasant journey south punctuated with a pit stop in Rosscarbery for a pint. It had turned cold and I remember how solicitous Montague was towards Elizabeth - proffering her his jacket as she shivered fetchingly. I didn't see much of him in subsequent years apart from occasional encounters in the old Shelbourne Bar. He always stopped for a chat and was unfailingly affable. He never lost that mischievous twinkle in the eye.

Over a year ago I was interviewing the artist Colin Davidson for a profile I was writing for the Sunday Times. Colin had done portraits of most of the North's leading literary lights: Brian Friel, Seamus Heaney, Paul Muldoon, and Michael Longley amongst others. I observed that he had omitted Montague from his pantheon and he agreed but said the reason was he had difficulty getting hold of him. I said I'd see what I could do to enable a sitting to happen. Given Montague's age it was tacitly agreed that it should be sooner rather than later. I knew he lived in Nice for a lot of the year so we would have to get him on one of his summer visits to Ireland. I got his Nice number and email address from Theo Dorgan and sent off a speculative email. A number of phone calls and emails ensued. Apart from a very brief word with Montague all of the dialogue was conducted with Elizabeth. There was a window of opportunity in late August when they were in Schull through which Colin could climb. More of which anon but in the meantime I got a chance to see the great man in action one more time.

An old UCC sparring partner, Eamon O'Donoghue, arranged to bring the poet over from his French base to do a reading during the Claregalway Garden Festival. The bold Doctor O'Donoghue had bought and heroically refurbished an old Norman castle in the town and this was the venue for the reading. I met Montague beforehand. He was having a glass of white wine and some cheese in an anteroom to the castle. Elizabeth sat by his side gazing up at him adoringly the while. Around him were clustered an artistic elite: Brian Bourke, Mary O'Malley and Jay Murphy amongst others. He looked frail but still retained that roguish twinkle. He's never been the greatest of readers, his mild stutter often intruding, so I was a bit apprehensive about how he might perform. It seemed good that he was taking the precaution of having a few glasses of wine beforehand for fortification purposes. I needn't have worried. Inspired perhaps by a very large audience, or the wine he continued to drink, he gave a fine robust reading - even cracking the odd joke. He began with that very slippery and sexual poem The Trout, which he dedicated to the memory of his old buddy Barrie Cooke. He also did that beautiful tremulous love poem All Legendary Obstacles:

All legendary obstacles lay between

Us, the long imaginary plain

The monstrous ruck of mountains

He continued through many of his best known poems, including Like Dolmens Round my Childhood and concluded with Landing, a tribute to his current wife:

"beside whom I now belong . . . my late but final anchoring”

There seems something wrong with that metaphor - a hint of captivity perhaps - but who am I question the great poet.

After the performance they inflicted the usual book signing debacle on the poor guy. The last I saw of him was with his tiny wife and the estimable Mary O'Malley who were supporting him on either side as they led him to the car that would take back to the hotel. The sailor is definitely home from the sea.

A couple of months later the portrait sitting happened in the Grove Guest House in Schull. Colin Davidson was granted an hour during which he took photographs and did a number of his preparatory sketches. The sitting went well according to Colin. Apparently the two Northern boys found common cause in their stutters - Colin also has a mild and not unattractive stammer. I look forward to seeing the end result. A museum or academic institution in the North or in Cork would seem apt. Or perhaps a benefactor could buy it for the Writer's Museum.

I had hoped to get an interview with Montague while he was in Schull but I was made aware by Elizabeth that I had used up my time allotment. In fact Lara Marlowe had done an excellent piece on him in the Irish Times not too long ago and I'm not sure I could have improved on it. She asked him the one question I would certainly have asked. It was the same question Montague asked Samuel Beckett in an interview just before he died: "Tell me Sam, looking back, has it all been worth while?". To which Beckett replied in the predictable negative, adding "and what's more I watched my mother die". When asked the same question by Marlowe, Montague was less bitter but did intimate that things could have been easier for him materially. A bit of a surprise that coming from a man with a winter retreat in Nice. But perhaps he feels underappreciated - that some of the rewards and plaudits that decorated his old buddy Seamus Heaney could have come his way.

Posted with Blogsy
Posted by Ardmayle at 1:03 PM