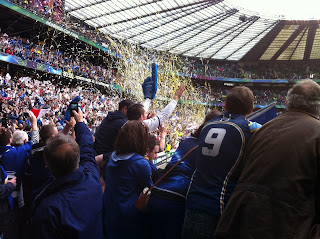 Uncluttered Gatwick is really the best gateway into London - and then the speedy and regular Gatwick Express into Victoria in 30 minutes. Landing at 17.30 we still had time for a drink in the Old Vic before the show at 19.30. I had been looking forward to the Duchess of Malfi. Great theatre, great gloomy gothic set, the smell of incense, great performances by Bosola (Mark Bonar) and the Cardinal (Fergal Lynch) and of course the splendidly jagged, bloody, and bawdy language of Webster. But, but, it was all spoiled for me by the casting of Eve Best as the Duchess. A fine actress no doubt but she lacks the carnal spark that seems essential to the character. She seemed a nice sensible woman who would be far too pragmatic to indulge in romantic adventures. Helen Mirren in her prime would have been ideal.

We devoted Saturday to the Heineken Cup final at Twickenham. A full house - about 70% Leinster to 30% Ulster.  A very intense and open match that Ulster never threatened to win, despite the early closeness of the score. They abandoned their South African tactics (kicking and forward power) and ran the ball at every opportunity. Fatal against Leinster. As a Munster fan I could only dwell on a fruitless future as long as this team stays together. Twickenham is easy to get to but bloody difficult to get from - only way is back to Waterloo by train and everyone is decanted up a rat run with consequent queues and delays - polite police and patient horses separating the crowds.

We managed to make our restaurant by 21.00.  Da Mario, north of Covent Garden, was a real find. A small family run establishment with delicious Italian food at reasonable prices.

On Sunday Sumosan in Abermarle Street was a different matter: waiters with attitude and nose-bleed prices. I'm not a fan of Japanese food anyway and get insecure when the table shares dishes. The clientele generally was young and Arabic.  They were out of Sancerre, we were told, because the Chelsea crowd had finished it the previous night. I assume they meant the Russians in the executive boxes.  As we were leaving Salomon Kalua from Chelsea arrived with his entourage - his Ferrari was parked just outside the entrance.  Much scraping and bowing from staff.
Posted by Ardmayle at 2:47 PM

The briskness with which the Brits deal with their white-collar miscreants is impressive (see New International etc.). Contrast this with our squalid little oligarchy where white-collar malefactors smirk their way around golf courses and fancy restaurants untroubled by our lumpen law enforcement agencies.
Posted by Ardmayle at 2:35 PM

A Shocking Assault at The National Portrait Gallery 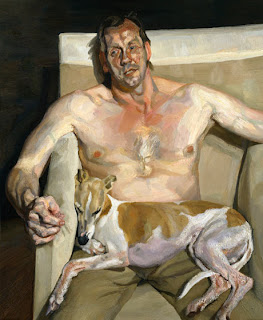 On a visit to London at the weekend I got up early to see the Lucian Freud show at the National Portrait Gallery. I was there as the gates opened to avoid the tiresome crowds that attend any high-profile art show in London. While the hordes did pour in eventually I got a good run at it before the deluge.


As I ambled around, admiring Freud's bleak portrayals of our too too solid flesh, his mounds of paint-soiled linen, and his affectionate depictions of whippets, I accidentally stood in front of a young guy. He was tall and dark-haired with good jeans (Paul Smith?) and a smart top - an Oxbridge boy perhaps. I only became aware of him when I heard a sarcastic "thanks" just behind me. I hadn't realised I had  blocked him (I've been to galleries before and know the etiquette)  so asked him "what for".   "You stood right in front of me" he said peevishly.  Instead of just apologising, as I should have done, I took umbrage at his tone (or perhaps it was an atavistic reaction to his ascendancy accent) and said "oh don't be such a prick".  His expression suggested that he very much wanted to give me a serious dig at this stage.  Instead, aware no doubt of the omnipresent security, he lurched towards me and attempted to shoulder me. It was a glancing blow - I was shaken but not silenced. "It's only skin deep isn't it, this veneer of being civilised", I chastised him. A bit priggish that perhaps, and of course most veneers are only skin-deep.  Anyway we went our separate ways. A little later I came face to face with him in another part of the gallery. "We'll get over it" I said smilingly in a spirit of reconciliation. "You will" he replied, somewhat bitterly, and strode off.
Posted by Ardmayle at 3:41 PM 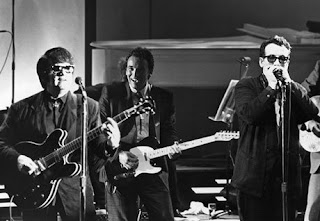 What a treat last night happening upon A Black and White Night on BBC4. This was a gig Roy Orbison did about a year before he died. It featured the man himself in great voice plus an all-star band that included a youthful Bruce Springsteen, Elvis Costello, Tom Waits, Jackson Browne, and the peerless James Burton on lead guitar. Backing vocals were supplied by such luminaries as K.D. Lang and Bonnie Raitt. They all seemed to be having great fun - especially Springsteen and a puckish Elvis Costello. Waits seemed redundant but added quirky colour. A lot of Orbison's songs are plangent and love lorn which probably explains why I loved them so much as a teenager. And still do.The following link gives a flavour of the fun.