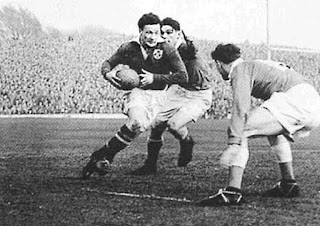 A friend invited me to a sports award dinner in the Burlington Hotel last night. A black tie affair attended by a large number of mostly male business folk and a good smattering of our leading sports figures - past and present. We had Deirdre Ryan the long jumper at our table - a graceful and charming woman who would do credit to a catwalk. Rugby was well in evidence with Paul O'Connell and Gordon D'Arcy representing the present and the likes of Michael Gibson, Jack Kyle, and Ray McLoughlin reminding us of the past. The newly minted pundit Alan Quinlan was looking fit and well - and attracting a lot of admirers - mostly male. Eamon Coughlan and Ronnie Delaney were also there and lots of old boxers and GAA stars. Giovanni Trappatoni was at the next table being closely supervised by the oleaginous John Delaney. And I had Bill Cullen and his Apprentice team at the table behind me - like a mafia don with his attendants.

I tried to avoid bothering anyone who didn't fall into my immediate orbit but I must confess I did make a special effort to say hello to the great Jack Kyle. It's hard to believe this small spry personable man is actually 85. He could not have been friendlier and we spoke for around 30 minutes about all manner of things. When I made some reference to my interest in art he launched into an anecdote about a Dan O'Neill painting that he once owned. He had it hanging in his house in Zambia for years and when the frame fell apart he brought it into a local framer to get fixed. While in there it was spotted by a British art dealer and he was offered £30,000 for it. He took the money but you felt he still regretted it. He then got talking about Oscar Wilde and lamenting the fact that two such great Irishmen as Wilde and Sir Edward Carson should end up on opposite sides in a court room. He launched into a word perfect rendition of a substantial chunk of the The Ballad of Reading Gaol: "for each man kills the thing he loves ...". He went on to heap praise on De Profoundis and bemoan the sad fate suffered by Wilde.

As we were saying goodbye he confided in me that he was delighted to get an opportunity to talk about something other than rugby and promised we'd discuss Yeats the next time we met. I had to go and spoil things then by asking him which of his two great scrum half partners he preferred to play with, John O'Meara or Andy Mulligan. His answer was masterfully diplomatic. He maintained that O'Meara had the quicker pass and so gave him more time do things. Mulligan on the other hand took pressure off him by making regular breaks and kicking more. He seemed fond of both of them telling me that he had visited O'Meara last year shortly before he died, and recounting an anecdote about when Mulligan applied for a job and was asked what religion he was. His response was "what religion do you want me to be?". As I headed home he was still there going strong in the middle of an admiring throng. A true gentleman.
Posted by Ardmayle at 5:13 PM

Time that is intolerant
Of the brave and the innocent,
And indifferent in a week
To a beautiful physique,

Worships language and forgives
Everyone by whom it lives;
Pardons cowardice, conceit,
Lays its honours at their feet.

Time that with this strange excuse
Pardoned Kipling and his views,
And will pardon Paul Claudel,
Pardons him for writing well.

These lines from Auden's poem In Memory of W B Yeats could also apply to Christopher Hitchens. He was infuriating, politically inconsistent, an intellectual bully boy, and a great harbourer of grudges but above all else he was a wonderful lively writer.

I'm in the middle of his recent book of essays (Arguably) and as usual with Hitchens finding it entertaining and annoying in equal measures. i used to admire unconditionally his colourful writing and his political polemics but found myself going off him in recent years. His tiresome backing of G.W. Bush and the Iraq invasion long after the rest of the world had seen it for the debacle it was diminished his standing in most reasonable peoples' eyes. Before that there was his shameful involvement in the Monica Lewinsky affair. He gave evidence against Clinton to a Senate committee - siding with the monstrous Kenneth Starr. What was it with him and Clinton? The sustained vehemence of his attacks suggested something personal - maybe a Washington social slight. When writing on other subjects he would frequently drag in an unflattering allusion to Clinton. Most peculiar. I also found his uncritical admiration of Martin Amis a bit mawkish. No one's that perfect - a lot of what he writes about him, especially in Hitch 22, comes perilously close to gushing. Amis's view of Hitchens fell far short of adoration. He saw the talent for rhetoric and disputation but also saw the flexible principles and the tendency to take things personally.

And yet he wrote beautifully and sympathetically about Philip Larkin and other literary figures such as Betjamin, Waugh (lost on me) and George Orwell.

i saw him at the Gate Theatre a few years ago - around the time God is not Great was published. He was doing PR for his book and the event was a debate with God botherer John Waters, chaired by Brenda Power. It rapidly descended into a one man show. Power was plainly in thrall to Hitchens and gave him free rein. Waters was strangely muted and never got a blow in. To avoid embarrassment at a palpable mismatch Power moved quickly to a Q and A session. This descended into farce as Hitchen's response to any awkward question was "fuck off, next question". Charming stuff. Maybe he'd had a long lunch.

You have to admire the way he dealt with his final illness - filing what will be a posthumous article for Vanity Fair in which he challenges Nietzsche's dictum that whatever doesn't kill you makes you stronger. Not his best but certainly his bravest.
Posted by Ardmayle at 5:00 PM

Reasons to Get Mad - Part 1

1. The energetic foisting of the debased currency that is Kevin Cardiff on Europe - rewarding failure again.
2. A universal property tax that charges the same for a cottage and a castle.
3. Enda addresses the nation on austerity and then pushes the salary of an erstwhile minion above the limit he specified. A Haughey moment for which he won't be forgiven.
4. A budget that saw high-earners untouched and those in trouble pushed deeper in the mire.
5. The big lie that is the Croke Park agreement. If you believe in public sector reform then you probably believe in the tooth fairy as well. It's all about leaving senior civil servants untouched. The rest is blather.
6. Allowing Fingleton and Fitzpatrick to walk the streets blithely.
7. And of course the big one: The brazen effrontery of a government asking tax payers to bail out the bankers and property goons who gambled us into this mess. And consequently the steady undermining of our independence and our bank balances.

And if all that isn't bad enough we have Gay Byrne back on TV and radio as if he'd never retired.
Posted by Ardmayle at 12:15 PM

Email ThisBlogThis!Share to TwitterShare to FacebookShare to Pinterest
Labels: The forcing 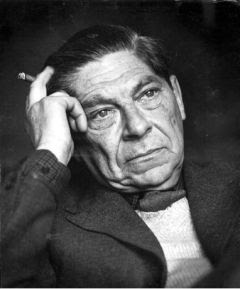 I've just finished Michael Scammell's surely definitive biography of Arthur Koestler, one of the great intellectual heroes of the 20th Century. It's a warts and all job with particular emphasis on Koestler's relentless womanising. He liked to operate from a domestic base so he was always living with one woman while he chased the others. But he was as relentless in the pursuit of truth and political justice as he was in chasing a well-turned ankle. It's remarkable the number of great events in European history he was involved in. He was an early Zionist and travelled to Palestine in the early 1920's to support the burgeoning Israel (but found the physical labour on a kibbuz not to his taste); he was Spain during the Spanish Civil War (narrowly escaping execution) and was in France when the Nazis invaded.

He saw through Stalin long before most of European intellectuals (such as Sartre) and his most famous novel (Darkness at Noon) did much to open people's eyes to the monster in the East. His campaign against capital punishment in England led to its eventual abolition, his articles in the Observer and his book Reflections on Hanging were hugely influential. Eventually he became disillusioned with politics and turned his attention to science. My favourite book of his is The Sleepwalkers, an accessible study of the history of cosmology that brought you into the worlds of Kepler, Galileo, Copernicus and Tycho Brae. A book I'm sure John Banville read before he started his novels on Kepler and Copernicus. I also enjoyed The Act of Creation, a study of the origins of creativity. Late in life he got into trouble with the Jewish lobby for having the temerity to suggest that the European Jews that emigrated to Palestine may have descended from the Khazars rather than from one of the 12 tribes of Israel. He also dabbled with parapsychology - an interest that did much to diminish his later reputation.

When his health deteriorated (he had Parkinson's amongst other ailments) he committed suicide along with his much younger (and healthier) wife Cynthia. He got much abuse for apparently dragging her into it but anyone reading of her long-term devotion to him would not have surprised at her willingness to join him.
Posted by Ardmayle at 1:52 PM