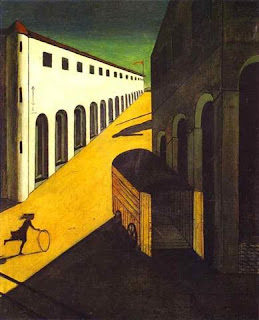 Action packed trip to Italy last week. Flew into Rome and holed up for two days in the Trastavere district – we stayed in the Hotel Santa Maria, an elegant little boutique hotel in the middle of a warren of alleys. There we dined outdoors in the hotel's own little orange grove. Schedule was hectic, Rome was hot (32 C), beer was consumed at regular intervals. Just to the right of the Spanish Steps was the Museum Di Chirico – you must book in advance, but it’s worth it. You get a private tour of the great man’s house and studio and you get to view dozens of his masterpieces, and a whole bunch of conventional academic stuff he did before he reverted to the signature style for which we know him (see right). You see his much younger wife’s double bedroom and his monk-like single bedroom. She was the model for a lot of his academic work and a fine worthy looking lump of a girl she was. A surprise for me were the beautiful Brancusi like sculptures he did mainly in silver and bronze.

We were with some visitors from the USA so certain tourist sights had to seen - at this time of the year, in this climate, that was a painful mistake. We cooked in the cauldron of the Colosseum; we sweated bricks in the Pantheon; and we trod the via dolorosa through St. Peter's Square. But from time to time there was respite.We visited the Capuchin Cemetery on the Via Veneto and checked out the mouldering monks and the beautiful decorative, albeit macabre, uses that their bones were put to. We also heeded the message therein: AS YOU ARE WE ONCE WERE - AS WE ARE YOU WILL BE. Nice.

But you know the great pleasure of being in Italy is the food and being able to dine outdoors with friends. Each evening we relished the first Prosecco and the slow procession through the menu - plates of pasta, plates of meat, and all the while the Montepulciano working its magic. We tried to stay away from the tourist areas and found some great spots without venturing outside Trastavere.

Driving is daunting in Rome with those pesky Vespas buzzing around you all the time. The trick, a taxi driver told me, is to drive as if they don't exist and they'll do the avoiding. Good advice I found out as I headed out of the city towards Siena.

Siena is a beautifully preserved city and is free of the curse of traffic. The cathedral is a striped marvel with a very unusual highly decorated bronze of John the Baptist by Donatello. We aim for nothing more than a stroll around and a leisurely meal at the Papei Trattoria - with a glorious view across Tuscany at dusk.
Posted by Ardmayle at 3:59 PM

A truly epic gig. The portents were not good: showery weather; seats mostly on the same level spread over a greedily wide area; and the feeling that maybe Cohen’s best days were behind him. Surely at 73 he would just be going through the motions.

But the genial old boy confounded my pessimism and put on an unforgettable show – sustaining the power and polish for nearly three hours. He received maximum support from a multi-dimensional band, and a trio of angels on backing vocals. As if the foxy and talented Webb Sisters weren’t enough, we had Sharon Robinson lending a voice also. She has co-written a host of Cohen’s songs (“A Thousand Kisses Deep” , “In My Secret Life”, “Everybody Knows” etc.) - and she added texture and colour to his renditions of these classics.

The backdrop was sensational, ragged clouds, the Wellington Monument, and the darkling sky provided the canvas on which Cohen painted his masterpieces. The sound also helped – it was pellucidly clear and plenty loud. And the alienating layout of the seats was offset by the two giant screens on either side of the stage. This allowed us to catch every nuance of Cohen’s performance and plenty of closeups of his twinkling eyes – and they twinkled a lot as he basked in his rapturous reception.

I have never been a supporter of the view that Cohen is a miserabilist. He is acerbic and sardonic for sure, and occasionally ruefully reflective, but he’s also a great celebrator of life and especially love. “There Ain’t No Cure for Love” was one of the early highlights. And his acerbic side comes out with “Democracy” (“democracy is coming to the USA”) which got one of the biggest cheers of the night.

He seemed to be enjoying himself thoroughly and doffed his fedora in a courtly bow to the audience after each song. He also regularly introduced his band and stepped back from time to time to allow them the limelight.

I fear we shall not see his like again.
Posted by Ardmayle at 3:23 PM

The Art Market is Alive although Slightly Unwell

Went to de Vere's Irish Art Auction last night - a reasonable attendance but with a high proportion of dealers. The highlight was a characteristically whimsical Gerard Dillon which went for €200,000 (€90,000 reserve) - two big boys locking antlers I suspect. Overall about 75% of the works on offer sold although a lot of them were at the lower end of their guide prices. However it did suggest that rumours of the death of the art market seem wide of the mark. A modest decline perhaps.

Both Donald Teskey and John Shinnors bucked the trend and remain very strong. Also, of the dead school, Dan O'Neill and Colin Middleton continue to wax. On the other hand poor old Paddy Collins star seems to be on the wane - although the works of his on offer were not great. A Camille Souter work on paper ("The Champion") went for €60K - €20K above the higher end of the estimate. Although it's a powerful piece, I couldn't have got over the apparently wizened left bicep of the victorious boxer. It's not that we're looking for realism from her, it's just that this particular section occupies the focal point of the image. Also, a lot of Souter's work seems to be on materials whose durability would worry me. There was sharp competition for a characterful Caracciolo pencil drawing "Portrait of an Italian Girl" - an exquisite piece. It eventually went to Frank McGuinness, the playwright, who also bought a dainty little Mainie Jellet nude.
Posted by Ardmayle at 8:34 AM

So New Approach wins the Derby (Saturday 7th June) in the style of a very good horse indeed. What a jolt to the British racing establishment; and it showed in the sniffy post-race interviews. Bolger had dissed the Derby by saying that he would rather run the horse in the Irish 2,000 Guineas followed by the Irish Derby – he inferred that the Epsom Derby didn’t really rate these days. As the Derby grew closer he reiterated this and claimed that the horse had only been left amongst the entries due to an administrative error on his part.

Then six days before the race Bolger announces that the horse will run after all. Consternation all round – pious fulminations in the Racing Post – apoplexy in Newmarket and Lambourn. And you can imagine the effect all this had on the ante-post market – at one stage this putative favourite was as high as 209-1. Bolger maintained that the soft ground changed his mind and that he was delighted when the owner’s (Sheik Mohammed’s wife no less) agent rang to discuss running the horse. He also asserted that his administrative error was the "best mistake" he ever made.

The bottom line of course is that all this is pious guff. Bolger didn’t want to run him but the owner saw a Derby opportunity (it’s a race Sheik Mohammed has never won) and made the decision. I’m sure Bolger can endure the humiliation – all he needs to do is look at his Derby trophy.
Posted by Ardmayle at 2:46 PM

Settled into Fitzgerald’s in Sandycove to watch Cork and Tipp last Sunday. Sitting in front of me was an intense young Cork guy who was ignoring his comely raven haired girl friend as he followed every puck – groaning and cheering as the match ebbed and flowed. I was with a Macroom man who behaved in a more restrained manner but still burned with the Cork passion for hurling - and with the tribal imperative to beat Tipp.

I kept quiet as Cork dominated the first quarter and it looked as if Tipp would be buried by half time. My phone grew hot with text messages from gloating friends in Cork. My Macroom mate made consoling noises. Then Eoin Kelly got half a chance, pivoted and flashed an unstoppable shot past the Cork keeper. The game turned on that instant.

Tipp waxed and Cork waned – especially after Paudie O’Sullivan missed a penalty – and Tipp were pulling away at the end. They looked fitter and more battle hardened than Cork and it seems their pro-longed league campaign did them a power of good. I also think that those three tough matches against Limerick last year brought on a lot of their younger players.

My phone grew cold again as my Cork buddies became mysteriously incommunicado. A few minutes before the end, lover boy in front of me got up and stormed out – followed at an Arabic distance by his foxy paramour.

Now it gets interesting. If Tipp beat Clare or Limerick in the Muinster final – and current form says they will – then they go straight to the All-Ireland semi-final and avoid Kilkenny. Dare we hope.
Posted by Ardmayle at 5:54 PM