I never quite felt the same about Sartre after reading his autobiography "Words" many years ago. A slender volume full of bile and bitterness. I preferred the life (and love) affirming existentialism of Camus to Sartre's squalid misanthropy.

"A Dangerous Liaison" focuses on Sartre's relationship with Simone de Beauvoir. What a creepy duo. The patron saint of feminism pimping for the existential hero. Sartre quickly lost interest in sleeping with the relentlessly intellectual (and frequently unwashed) De Beauvoir - so she began sleeping with him by proxy. Their modus operandi was for her to identify a vulnerable young student, sleep with her and then pass her on to Sartre. The book goes into forensic detail about Sartre's peculiar bedroom habits - let's just say he preferred passive victims to active engagement. Most of these girls (and there were dozens of them) were young students usually far from home – looking for a parental figure, or swayed by the fame of their seducers. Unlike his nemesis Camus, Sartre didn't relish the cut and thrust of adult relationships.

This doyen of authenticity and enemy of “bad faith” also collaborated with the German occupation; and later refused to criticise Stalin or the Soviet system – despite all the evidence – until the Russian tanks rolled into Budapest. Also, he and De Beauvoir conveniently abandoned their Jewish girlfriend Bianca Bienefeld in 1940. No doubt Satre’s contempt for bourgeoise morality made these stances easier for him.

The book quotes John Huston's famous description of Sartre: "He was small, stocky, and as ugly as a human being can be. His face was lined and swollen, his teeth yellow, and to top it all up he squinted.” His own awareness of his physical shortcomings may explain his appetite for female reassurance - but no matter how many princesses this frog kissed, no magic transformation took place.
Posted by Ardmayle at 10:31 AM

Kevin Sharkey eh - what an operator: homosexual, heterosexual, professional victim, commercial hero, paramour of Sinead O'Connor (well OK, he claimed a one-night stand), artist manque but above all self-publicist extraordinaire. For the past few years we've had RTE, the Irish Times, the Tribune, The Independent and various light-weight magazines publish uncritical puffs for this creature - invariably telling the gullible Irish art parvenus that here is a good investment. We've even had the sainted Aidan Dunne, kindly art critic, interviewed on RTE and not having the balls to state the obvious about his artistic pretensions. His most apparent talent is for self promotion - how did someone so obviously devoid of talent get so many editors to promote him. His forte is for sub-Pollock abstract shite, dashed off.

However, his latest ploy has rendered all the aforementioned articles and uncritical puffs both ridiculous and pernicious. Sharkey has announced, through various media ads, a closing down sale at his gallery whereby all works are reduced by 50%. Now if I had followed the advice of the various organs of opinion that advocated investing in this guy, I would feel a tad disgruntled to find the value of my investment halved in one fell swoop. But therein lies the problem of following fashion and the trendy rather than obeying the evidence of your eyes.
Posted by Ardmayle at 8:44 PM

The Weir at The Gate

It's always a pleasure to go to the Gate: easy car parking, great view everywhere in the auditorium, well acted, professionally presented theatre. 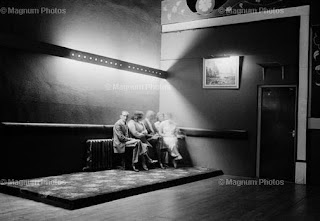 The program cover told us what this play was all about - it featured a shot by the Magnum photographer Martin Parr of the Mayflower Ballroom in Drumshambo, Co. Leitrim - some time in the early Eighties. The image speaks volumes about spiritual desolation and quiet desperation in rural Ireland. The play was a more garrulous version of the photograph and was set in a pub rather than a ballroom. Sean McKinley was wonderful as the embittered old bachelor who had lost his one chance of love. It was all too believable and naturalistic - although I did wonder whether they were drinking real alcohol. Was the Guinness tap not working a ploy to enable them to drink alcohol-free lager - because it looks no different than its alcoholic equivalent. I brood about stuff like that. The play dwelt on the superstitions of those immured in the darkness of rural life (both real and metaphorical), and of their isolation and loneliness. There is no redemption, or much hope - just humour as a whistle in the dark. And lots of drink.
Posted by Ardmayle at 3:36 PM

Harrington Does it Properly

Last year Padraig Harrington won the British Open by default - he fell over the line ahead of the collapsed Garcia. When tested he cracked under the pressure but was redeemed - luckily. This year he won it in style - as all around him fell apart: Norman, Choi, Wakefield etc. It was left to Rod Stewart clone Ian Poulter to set him a challenge. Having started cautiously (irons from the tee), Harrington faltered at the turn, but from the 10th he didn't make a false move and attacked the course like a hero. His shot at the 17th typified this courage. He could have laid up for a safe par but instead went for the hole with a five wood - curving the ball over the gorse and landing it four feet from the flag. This shot will be played on TV the day he dies. Now if only he could control that bloody child of his as well as he does his five woods (we had the little blighter running amok on the green after he holed out).

Nice speech at the end as well - gracious to Norman and Poulter - but unfair to plumbers: he recounted an incident from an earlier round where he was walking off the green after taking a double-bogey and a spectator tapped him on the shoulder and said "Don't worry about it Padraig, I've to go back plumbing on Monday".
Posted by Ardmayle at 2:07 PM

What an engrossing Wimbledon final eh. You have to go back to the halcyon days of McEnroe and Borg to find an equivalent. Neither player deserved to lose – and neither blinked when facing the abyss. The margin between them was tiny. In the end Nadal made fewer mistakes. His style allows for a far greater margin of error – his strength lies in the weight of his shots, that heavy top spin forehand that kicks and swerves. Federer on the other hand goes for pin point accuracy – clipping the lines a speciality. But he leaves himself little margin for error. His backhand passing shot at match point in the fourth set was the best shot I have ever seen – allowing for context obviously.

Nadal is like Borg in his relentless consistency although Borg never had such power. His main weapon was the accuracy of his passing shots. McEnroe is more like Federer – he has a far greater repetoire of shots. All four share a steely temperament and exhibit amazing grace under pressure.
Posted by Ardmayle at 4:20 PM

After Siena we negotiate our way across the rolling hills of Tuscany to Caprese Michelangelo where we have a party to attend. Good food, good company, good fun.

The next day, for our sins, a visit to La Verna high in Tuscan Apennines. This is where Francis of Asissi built a monastery and acquired the stigmata (or suffered the side effects of malignant malaria - take your pick). It's an epic location, an eyrie. We saw some of his relics, his scourge, his poignantly ragged habit, and a few blood-stained bits of cloth. We also saw the damp cell where he slept - no wonder the poor man died prematurely. The monastery is still a place of sanctuary and repose. The food in the restaurant is vile though - St. Francis would have approved of the pain involved in eating it.

If you ever plan to fly home to Ireland from Ciampino - Rome's second airport and home to Ryanair - be sure to spend your last evening in Frascati, only 15 minutes drive away. We ate out near the main square amongst locals of all ages - making sure to sample the refreshing white wine for which the area is known.
Posted by Ardmayle at 12:48 PM

So farewell then Bo Diddley – the gaiety of nations suffers a subtraction. He seemed to be around forever with his black bedecked hat and his rectangular guitar. He was a seminal figure in the history of rock. Without him we’d hardly have had the Rolling Stones and he was a major influence on Buddy Holly. You’d imagine that “Not Fade Away” was a Bo Diddley song but in fact Holly wrote it – inspired by the Bo Diddley sound. Holly also, of course recorded the song “Bo Diddley”.

It’s curious Bo Diddley also wrote the plangent “Love is Strange” – recorded by the Everly Brothers and Paul Macartney among many. He was best in small doses singing stuff like “Mona” (also recorded by the Stones), “Roadrunner” and “Who Do You Love”.
Posted by Ardmayle at 12:32 PM