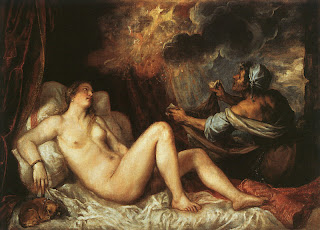 Just back from Madrid - an estimable city that heroically resisted that old brute Franco and had the gumption in 2009 to to strip him of all his self bestowed titles (honorary mayor of Madrid, Adopted Son of Madrid etc.).

The hugely impressive metro system takes you from the airport to the city centre for €2. Most other journeys cost €1. Whenever I travel in Europe I am struck by how the citizens are looked after by their governments. We have a dysfunctional public transport system and a punitive regime towards cars – the worst of both worlds. The four days I spent there I used the metro exclusively - it operates until 1:30 or so and is clean and regular. Now that's what I call public service.

The highlight of course was the Prado. My nomination for the best gallery in the world. I kept my focus narrow because you can be overwhelmed by the infinite variety on offer. I confined myself to Goya, Velázquez and Titian. I love Titian, his Ecce Homo is one of the most powerful paintings in the building and his Danae is definitely the most erotic. However I had never seen Velázquez en masse before and his wonderfully expressive portraits left the most lasting impression. Most of them were of Spanish royalty but painted as the poor bare forked animals that lay beneath the ruffs and finery. There was also a series of portraits of the court jesters or bufoons. The one that lingered in my mind's eye was Velázquez's portrait of Sebastian Don Morro. In his expression you can see his intelligence at war with his ridiculous station. 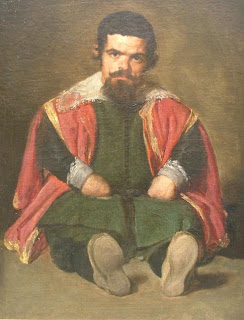 The Reina Sofia Gallery was also worth a visit - not just to see Picasso's austere masterpiece Guernica - but also to enjoy a playful collection of contemporary sculpture.

There's a moving minimalist memorial to the 2004 terrorist attack in the Atocha train station. It's interesting to see that amongst the 191 victims named in the monument there are only a couple of non-Spanish names - and these are Eastern Europeans ones. An indication that Madrid is not a tourist city like Barcelona.
Posted by Ardmayle at 8:04 PM