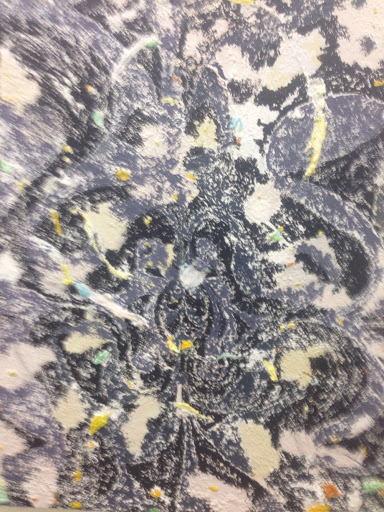 An edited version of this review appeared in the Sunday Times Culture magazine on the 19 March 2017.

The term “trippy” was made redundant in the early Seventies but on being confronted by Phillip Allen’s new show at the Kerlin Gallery one is tempted to re-employ it. Gaze into a painting such as Chin Music (Soft Octopus Version) long enough and you’ll find it gazing into you – like Nietzsche’s abyss. Allen is an English artist who has been showing at the Kerlin since 2005. As befits someone who lectures on art he is not afraid to change tack and sail off in a new direction. His last three shows could almost be by three different artists if it weren’t for one recurring feature. The title of the current show, Deepdrippings, suggests Jackson Pollock and the intertwining ribbons of black paint and the splashes  of colour confirm the connection.  Allen’s work however is more condensed, more intimate and intense, eschewing the macho scale of the American. In many of the smaller pieces the image is framed by his trademark thick border of impasto. This draws you into his disorientating cosmic visions where your eyes dance around trying to find purchase amidst the swirling riot of paint.        Kerlin Gallery Dublin.       John P. O'Sullivan

Over the course of the 5 weekends that constitute the Six Nations championships I tipped the winners of 12 of the 15 matches. The three I got wrong all involved Ireland. I thought we'd beat Scotland and Wales and lose to England. Of course we shoulda and coulda in the first two cases but there's a fatal lack of cutting edge in our back line (aside from Sexton and Murray) and we couldn't translate dominance into scores. The preponderance of home results suggest that there's not much between all the teams (excluding hapless Italy) and that England have been over hyped. I have a feeling our season will end well with Munster and Leinster well in contention for European honours. We should have 6 or 7 players in the Lions. Sexton, Murray, Furlong, Stander and O'Mahony will surely go. Best, Henshaw, Healy and O'Brien are possibilities and I'd nominate Zebo as a wild card. Best has an outside chance of being captain but I strongly suspect it'll be a Welsh man. I'll take anyone but Hartley.
Posted by Ardmayle at 5:35 PM

After the concentrated focus on Cheltenham all week it's a relief to move on to rugby where my engagement isn't financial apart from the odd bet on Stander to score the first try. I missed my week 4 forecast but would certainly have expected both France and England to win easily as they did. I thought Ireland would be too good for the previously unimpressive Welsh side but we managed to fuck it up again for a number of reasons. Henshaw's rush of blood ultimately cost us the match because the momentum was with us and a converted try at that stage would have seen them sag. However, given the amount of possession we had, we still should have won. There is a lack of creativity in the back line - especially at centre. We rely too much on Sexton to create the spark, or Murray. They were both off for periods which set us back. Also, our bloody lineout has gone to the dogs. It's inexplicable to me how O'Mahony isn't on from the start to give us more options. Toner was woeful and deserves to be dropped and Best wasn't exactly hitting his targets. England will murder us in this area unless we come up with something. Regarding this weekends matches, let's get the easy ones over with. Scotland will show that they are not as awful as they appeared against England by hammering Italy. France will confirm my poor opinion of Wales by beating them, not quite so easily. Wales rescued their season by beating us and won't be as cranked up. I had thought we would do a home town job on England but seeing the team I now doubt it. Murray is a huge loss, not least for his cover and tackling but also for his general air of being in charge. Kearney has been poor all season so I'm glad he's gone. His aerial game is as good as ever but after he makes a heroic catch he just charges aimlessly into the cover and the whole thing peters out. Payne is short of game time and I'm not sure a match against England is the place to give it to him. I'd have put Zebo there and added Conway or Gilroy on the wing. Having dropped Toner for being off form Schmidt has still omitted O'Mahony. I'd have dropped Heaslip (where has he been this season?) and rejigged the back row to accomodate O'Mahony. It's beginning to seem that Schmidt has a Leinster bias and that he's reviving that old adage about it being harder to get off the Irish team than to get on to it. I see England winning by about 12 points. I'll be very happy to be wrong as, unlike Cheltenham, it won't cost me anything.
Posted by Ardmayle at 7:39 PM

Eh Joe at the Gate 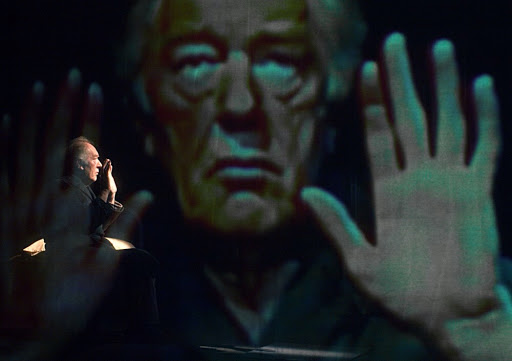 Michael Colgan's valedictory season of plays by Beckett, Pinter and Friel keeps up the very high standards he helped to initiate and sustain for 33 years. I saw a great version of Pinter's The Dumb Waiter last week with Lorcan Cranitch and Garrett Lombard. This week's offering surpassed that with a virtuouso version of Beckett's Eh Joe. Not knowing the play I was wondering how Gambon was going to get on because, famously, he had retired because he could no longer remember lines. Of course, as I discovered, Eh Joe is ideal for him as there are no lines. He basically just sits there and responds visually (rather than vocally) to a disembodied woman's voice. She is the voice of his conscience reminding him of how badly he has treated various women and what now lies ahead of him. It's classic Beckett in terms of the stripped down language and the bleak intimations: "Then yourself ...That old bonfire ...Years of that stink ...Then the silence". Bracing stuff.   I knew the play was written for television - the first such one he wrote - and that it mainly features the actor's face and attendant reactions. So I was wondering how it would be staged and was thankful I had a seat close to the stage. But I needn't have worried. They filmed his face as he sat on a bed and projected it giantly onto a scrim (transparent cloth) that covered the entire front of the stage. His read covered an area close to half the size of the scrim so even a visually impaired person in the back row could monitor every twitch. And twitches there were aplenty, and tears. Gambon gave it the full rueful, sorrowful, pitiful works. It was only 30 minutes long but that was enough for such sustained bleakness.
Posted by Ardmayle at 6:09 PM

John Short at the Solomon Gallery 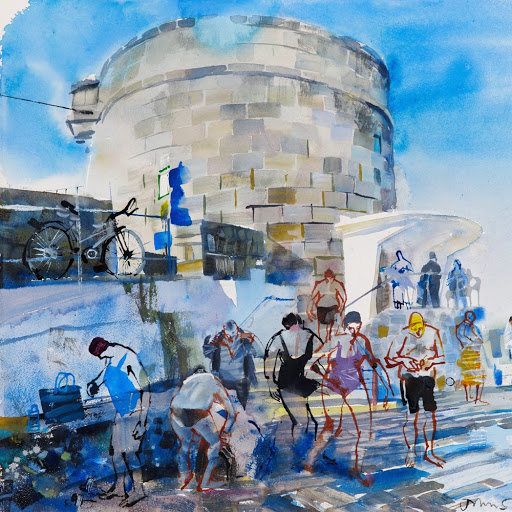 A slightly edited version of this review appeared in the Sunday Times Culture magazine on the 12 March 2017.

John Short is best known for his bright and playful water colours and prints depicting the often portly denizens of South County Dublin going about their bathing business. Short’s work keeps the best of company and can be found in Áras an Uachtaráin, the Shelbourne and in the Law Library. His new show at the Solomon extends beyond his usual haunts to embrace cockatoos and kangaroos in Australia and dancers in the South of France. Large watercolours, such as the striking Cockatoos, Sydney, require a deft touch and Short is a master of the medium. His expertise was recognised with the prestigious 2012 Artist Prize at the Royal Watercolour Society in London. He augments his paint work with ink, collage and occasionally photo transfers. There’s a sense of evanescence in some of these carefree scenes. It is suggested in the ectoplasmic outlines of his swimmers in Winter Bathing Scene, Seapoint as they disport themselves against the stern permanence of a Martello tower. His collected sketchbooks over the past thirty years are also on show, evidence of a long-standing dedication to his art and his capacity for capturing the transitory and rendering it permanent in his warm and colourful paintings.