Katie Taylor seems like a very decent woman and is an impressive and dedicated boxer. However I do cringe when I see her being declared RTE Sportsperson of the Year. Her career as a professional has been carefully choreographed and her achievements are modest. The pool of talent in women’s professional boxing is very shallow in any case. Nobody can blame Eddie Hearn for trying to contrive a lucrative career for her – a man has to live. However, I’m not impressed with the craven connivance of her cheer-leaders in the Irish sporting press who sing her praises as if she’s a Sonia O’Sullivan or a Brian O’Driscoll – sporting greats tested and proved in the cauldron of genuine competition rather than in an adjunct of show business. 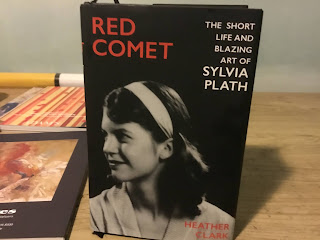 My dedication to physical books rather than electronic devices was severely tested by this massive tome – a hard-back weighing in at over 1,000 pages. I like to read on my side in bed and the weight was a problem. However, it was a riveting read and proved to be worth the physical discomfort. Most biographies of Plath tend to land on one side or the other of the Ted/Sylvia divide. He’s a philandering monster who abandons not one but two families, and causes not one but two suicides. She’s needy and neurotic and drives him away through her desire for perfection in all aspects of her life. It’s a measure of Hazel Clark’s objectivity that while you find the story absorbing and convincing you end up feeling that both protagonists are quite unlikable and equally to blame for the tragic denouement.
Plath only became a major figure after she died. When people read the posthumous Ariel poems and went back to the autobiographical The Bell Jar her genius became apparent. The tragic trajectory of her life also increased public interest in her work. During her lifetime she had only modest success while Ted Hughes was a rock star amongst poets. Since her death this has been reversed and in addition Hughes’s poetic legacy has been tarnished by those who blame him for her death. (Ironically Hughe’s late poems where he accepts some blame are amongst his best). Plath was a very organized, ambitious, and energetic woman. When Hughes met her he was living a roaring boy Byronesque life assuming the world would soon acknowledge his talents. She changed all that. She recognized his genius and started typing out his poems and sending them to the right kinds of publications and crucially to the BBC. She got him organized. It was through these efforts that his reputation was built and he began to win awards and grants. Soon he had surpassed her and she began to ride on his coattails – finding doors now opened to her that had not been before: Meetings with T. S. Eliot, readings on the BBC, and acceptance within the clannish English poetry world.
But there was a worm at the heart of their relationship. Plath wanted to be both a famous poet and a fabulous wife and mother – perfection of the life and of the work. She wanted a perfect nest with American appliances. Hughes, young, good-looking and famous wanted more than domestic bliss and an efficient vacuum cleaner.  Being a devoted lover of D.H. Lawrence sexual freedom was important to him. The night Plath killed herself he was being unfaithful to Assia Wevill, for whom he had left Plath, with a third woman. Plath also had long-term mental illness issues and had tried suicide before - as detailed in The Bell Jar. The book makes much play of the impact on her of the premature death of her father and of the frequently acrimonious relationship with her poor, put upon mother Aurelia. Her own perfectionism was a burden as any kind of failure hit her hard. Her first break-down came when she found that her small-town successes did not impress those she worked with when on assignment with a New York magazine.
There were plenty of surprises for me. She was very sexually liberated for her times and before marriage she complained regularly at the freedom that men enjoyed to fuck around being denied to women. She exercised enthusiastically her right to be equally adventurous and active – much to the chagrin of some of her New England peers. Her partners however were quickly abandoned if they didn’t measure up to her intellectual requirements. She preferred older guys from whom she could learn something or who could provide access to the publishing or academic worlds. Her steely determination only to mix with people useful to her career reminds me of that same attribute in the young Susan Sontag. Both women shared a certain humorless and beady-eyed ambition. She notably looked down on Hughes’s parents up north as being uneducated and working class and dreaded visiting them. Nonetheless Hughes ensured that she was buried amongst them.

She seemed to suffer from financial problems for most of her life and developed an almost Dylan Thomasesque talent for extracting money from family and admirers. Her family were not poor but Plath struggled financially for most of her life. After her father died it was a struggle to keep up with her academic ambitions – her mother had only the salary of a minor academic. In addition to winning various scholarships, an earlier admirer of her writing, Mrs. Prouty (a successful popular novelist), became a life-long supporter through regular cash injections. These early deprivations engendered in Plath an enduring insecurity about money that probably played a part in her demise. There were  myriad factors however:  The cold weather, the fear of an impending committal to a mental hospital, Hughes’s desertion, the difficulties of living alone with two young children, sexual rejection by two friends of Hughes (hang down your head Alvarez), and a bewildering cocktail of drugs many administered by a GP who knew nothing of her clinical history.
If the book has a flaw it’s perhaps in the level of  detail about multiple poems submitted to multiple magazine over the course of her career – worthy but too much distraction from the drama of her life. Otherwise it’s a gripping account of the entwined lives of these star-crossed lovers – and a persuasive reminder of the excellence of both poets. A lot of the information comes from journals and letters much of which is new to me. Hughes himself was responsible for a lot of the information and he wasn’t afraid to give himself a good lash or two. His immediate reaction to her death (a statement he repeated on a few occasions) was telling: “It was her or me.”

I wake up to a beautiful, crisp, snow-clad morning. Looking out on the pristine scene I see a long black limousine parked outside our next-door neighbour’s gate. They are an elderly couple and the husband has been confined to a nursing home for the past nine months or so. I fear the worst. Shortly afterwards the wife emerges surrounded by four or five others – all dressed in black. I look up RIP.ie and my fears are confirmed. The poor man actually died three days ago. It’s an indication  of how circumscribed our lives have become that we had no idea until the appearance of the ominous vehicle. The family were especially cautious about any external contact. Instead of having a celebration of a life well lived (as it certainly was in the case of this kind and intelligent man), he is dispatched in a manner that seems almost furtive. We watch the online service and hear the celebratory words but the communal solidarity is absent.