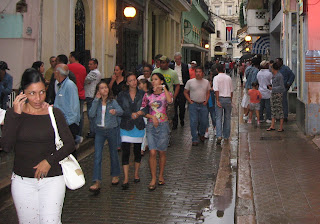 Havana is looking more prosperous this year. More shops along Calle Obispo, more goods in the shops, more energy in the streets. But the hustling has got more intense and it was a relief to get away to the unspoiled east where tourists are stared at rather than importuned. The hustling took many forms: straightforward begging from stick-thin old ladies, younger women using babies as props, hustlers hawking cigars, chicas offering themselves, and mariachi bands touring the hotels and assailing the hapless drinkers with Guantanamara and Besame Mucho. Luckily we had the roof-top pool of the Parque Central hotel to escape to - and there we were able to observe the radical differences between Air France and Virgin Airlines flight attendants. Women and girls really, in fact women and shop girls. While the Virgin crew frolicked in the pool with their under water camera, the French girls gave each other massages, or read their novels while smoking in that elegant French way.

Much affronted by naughty Havana our blameless trio decided to head for beautiful Baracoa on the east coast. The train seemed an adventurous option so we headed off to the central station where a bloated ticket office operator ignored us for a while as she conversed with a colleague and then gleefully informed us that there were no trains that day. So we hied it to the airport. Alas all planes to Santiago di Cuba, the nearest main town to Baracoa, were full. There were however planes to Moa if we bribed the appropriate ticket agent. We were in the air before we discovered two things: Cuban airlines have an appalling safety record; and the Rough Guide to Cuba expressly advises people not to go near Moa. Looking around the short-arsed turbo prop we realise that we were the only tourists to ignore this advice. Moa is known for its open pit mining of nickel - and not much else.

When we arrive, very bumpily, in an airport nestling cunningly amongst the hills, we discover that they're not really set up for tourists. I ask a surly police man if there are any taxis and he just sneers and turns away. Well he might, the only transport around is the cyclotaxi, designed for short local journeys. Baracoa is 30miles away and the road is not really a road - more a track with occasional stretches of tarmac and numerous pot holes. Miraculously we find a Cuban called Anderson who speaks English. He takes us to a shanty town where we find a man head down under the bonnet of a big yellow taxi. He agrees to take us for €60. The journey featured two police checks (for the driver), numerous black pigs, oxen drawing carts, and lots of purposeful men walking the road armed with machetes. Two hours later we land in an idyllic beach side hostel.
Posted by Ardmayle at 1:55 PM

Where Were You When Ireland Won the Grand Slam?

I've been following Irish rugby since Tommy Kiernan played scrum half for UCC, since Jack Kyle and Paddy Berkery played for the Rest of Ireland against the Combined Universities in Musgrave Park, since Vincie Giltenan propped for Dolphin, since A.C. Pedlow couldn't get off the Irish team no matter how badly he played, nor could his lantern-jawed Ulster colleague Noel Henderson, since Mick English missed a crucial drop goal against England in Lansdowne Road. But where was I when Ireland won the Grand Slam, grasped the Holy Grail, saw the ascension into Heaven of the greatest Irish team in history (O'Driscoll, O'Connell, O'Gara, David Wallace et al)? I'll tell you where I was, I was lying beside the roof-top swimming pool of the Parque Central Hotel in Havana surrounded by Air France flight attendants - sipping a mojito. In the pool, riff-raff from Virgin Airlines cavorted, the Air France girls smoked elegantly and gave each other massages. All benignly indifferent to what was happening far away in Wales. I was in text message contact with a friend in Dublin who kept me engaged with the unfolding drama. I suffered along with the nation - except more exquisitely, as the pauses between the significant events were more laden.
Posted by Ardmayle at 4:52 PM

Just finished Susan Sontag's Reborn: Journals 1947 to 1963 and the overwhelming impression is that she was a monstrous intellectual prig. But I should temper this criticiam with the fact that she was just 16 when she started writing them.

I have long admired Sontag as a feminist who was far removed from the ankle biting of Andrea Dworkin, as a Jew who saw flaws in the US policy in the Middle-East, and as an intellectual who was not afraid to say things that were unpopular even with her allies in the NYRB. She was the only prominent US intellectual to suggest that 9/11 may have been the pigeons coming home to roost. In the New Yorker shortly after the atrocity she stated that "The unanimity of the sanctimonious, reality-concealing rhetoric spouted by American officials and media commentators in recent days seems, well, unworthy of a mature democracy." Good on ye girl.

But her journals are something else. The first impression is how precocious she was. When I was reading science fiction and Frank O'Connor she was reading the journals of Gide and Kirkegaard. She was also wonderfully scornful of cerain writers - I felt a sympathetic twinge when she dismissed Henry James out of hand. She also dismissed people in her life - if you weren't contributing to her intellectual development you were let go. Her sole motive for marrying seemed to be that her putative husband offered interesting research options.

The journals were disappointing in that there were endless lists of books bought and films seen but very little of her opinions about most of them. The lists were impressive in their intellectual heft but we rarely get to hear of how they affected her.

Her achilles heel was her sexuality. Alongside the extreme intellectual precociousness is an unhappy besotted lesbian who was plainly embroiled in a number of abusive relationships. We never get to hear how she went from married hetero-sexual academic to tortured lesbian. In her public life Sontag never discussed her sexual orientation, but in her journals she sang the praises of lesbian adventure. Although evidence suggest she actually had a penchant for monogamy - she ended her days living with the photographer Annie Leibbovitz.
Posted by Ardmayle at 3:39 PM

Such hopes abandoned, such cups from lips dashed: that's Cheltenham for you. I love the first day, especially the Supreme Novices Hurdle (for future stars), and the Champion Hurdle (for established stars). I never back favourites so I'm always looking for good each way value for money.

In the first race I back Copper Bleu from the Philip Hobbs stable, more mature than most in the field having won point-to-points and just the kind to come up the hill past the more fancy bred flat horse types. He's good value at 16-1. He does nothing wrong, stays to the inside the whole way around and challenges for the lead coming to the last, but he's come too soon and is run out of it by one, two, three other horse, just losing third place by a head. Dear oh dear.

Next comes the Arkle Chase and I back Kalahari King to win at 10-1. He bides his time at the back of the field until two out and then he makes up a huge amount of ground to challenge Forpaddytheplasterer after the last - he makes up length after agonising length and the post arrives with him a short head to the bad. Shit.

Next comes the Champion Hurdle. All romantics meet the same fate sang Joni Mitchel and I really should have known better than to back Brave Inca with the ground so good - he's too old and needs heavy ground to be effective. The result is inevitable - a younger horse with a course and fast ground profile prevails. Stupidity.

I avoid the chases although fancied horses win both and concentrate of the Mares Hurdle - the last race, the getting out stakes. Alan King has a good record with staying hurdlers and I latch onto his Over Sixty as a good each way prospect at a fancy price - I back him at 33-1. You know the rest. He is up with the pace most of the way - loses position as they speed up two flights out but finishes strongly after the last. Fifty yards from the post he's in second place but is caught on the line by two others and finishes a tragic fourth - beaten by a head for third. Fuck me sideways.