For God's sake get over it. It's only a bloody football match - where randomness rules. It was bad enough having a Taoiseach who had a schoolboy crush on Manchester United, now we have one who goes bleating on about replaying a match just because the referee didn't spot a blatant foul. A bit of dignity and perspective Brian please. I recall Munster being cheated out of a Heineken cup final by the hand of Neil Back a few seasons ago. They took it on the chin and moved on - shit happens in professional sport. Quelle surprise.
Posted by Ardmayle at 10:19 AM

Read it and Weep

Anyone who cares about language, who relishes the pinpoint appositeness of a particular phrase, should read the novels of Nabokov and the non-fiction of Martin Amis. Here we have a fine example of the two juxtaposed from last Saturday's Guardian:

The snippets from Nabokov's novels and Amis's felicitous phrase-making combine to make the tastiest of appetisers for their main courses.

Read it and weep for your own shortcomings as a writer.
Posted by Ardmayle at 4:40 PM

Instead of the customary brace of pints we started our rugby international day with a couple of mojitos at the Cuban stand in Jury's - part of some International Bazaar for charity. And then a taxi to Croke Park for Ireland versus Australia. It was unseasonably warm, dry turf, no wind, blue skies -ideal conditions for a good open game. And what a treat it is to have such a stadium. Aside from its visual impressiveness, it's easy to get to your seat, the pitch of the stands give you great theatre, and the facilities are a huge improvement on anything an Irish sports fan has encountered before - plenty of toilets for a start, and a chance to enjoy a warm Bushmill's.

The match itself was highly entertaining with Ireland snatching an unlikely draw in the last move of the game. They were on the back foot throughout after conceding a soft try in the first minute. This came through ring rustiness perhaps - although the speed of the Australian defence had as much to do with it as O'Gara's pass and O'Driscoll's fumble. Australia kicked intelligently and kept Ireland pinned back for a lot of the game, they also dominated in the scrums - with our lads getting poor ball as they retreated. But elsewhere we were more than a match for them. Kearney was excellent (apart from some poor kicking - too high, no length), O'Gara solid enough, and the ageless David Wallace a hero in attack and defence. But Paddy Wallace is a weak link, an insubstantial figure in a substantial team. Bring back D'Arcy for God's sake.

And what a pompous tosspot Jonathan Kaplan is. I listened to him on the ref audio channel lecturing the players like schoolboys, and getting great deference in return. Give me Nigel Owen any day. And of course we get the usual debacle around resetting the scrum and the completely arbitrary penalties at the breakdown. What a f***ing mess the current rules are.
Posted by Ardmayle at 4:48 PM

Is it my imagination or has the whole poppy wearing thing got out of control? Remembrance Day is the 11th of November but this year people in the UK seem to have been wearing them for weeks - and they're still at it. This surely debases the currency. Also, it's become so pervasive you would wonder has it become compulsory? Does wearing it mark one as more patriotic (like the US flag pin during Bush's time)? Even the bloody football teams have jumped on the bandwagon. And of course you can't appear on TV without it - even in the most vacuous of entertainment shows. Now it would be churlish to argue with sparing a thought occasionally for those who died in the service of their country - even in a war as foolishly engaged in and as spendthrift of life as the First World War. However, we in Ireland, and not just Derry, can't help but feel a bit queasy about the whole business.
Posted by Ardmayle at 10:24 AM

For the first international of the season the Irish rugby team to play Australia almost picks itself. The only doubt is in the centre because of D'Arcy's poor recent form. But I think that Kidney will pick him because of his tackling, rather than move in Fitzgerald or Bowe from the wing. Earls will be on the bench. Here's my guess: Kearney, Bowe, O'Driscoll, D'Arcy, Fitzgerald, O'Gara, O'Leary, Healy, Flannery, Hayes, O'Connell, O'Callaghan, Wallace, Heaslip and Ferris.

And you'd fancy them to run Australia very close, if not beat them.

P.S. H'mm, close enough. But I'd quibble with picking that lightweight Paddy Wallace in the centre.
Posted by Ardmayle at 5:20 PM

There is a sacred time every Sunday, an islanded hour, when I like to find a quiet corner in a public house and read the Sunday papers. An essential part of the experience is the accompanying two perfect pints of plain. And then home for dinner. In this vale of tears surely that's not too much for a man to aspire to.

But I am finding it increasingly difficult to achieve this modest aspiration in my neighbourhood. Take last Sunday. The pint in my local (Fitzgerald's) has deteriorated of late and besides the big match (Chelsea and Manchester United) means that it will be heaving with soccer fans. Finnegan's is a fine pub but its Guinness has never been great - and I hate that renovation they did. I have a grudge with the Queen's (an incident with the red-blazered basilisk that owned the place) and I never liked that weird little speedy bar man in the The Club. So I settled on The Ivory where I know the pint will be perfect, and there's usually a quiet corner. And indeed the pint is excellent but there's no quiet corner - I think they've added a few TVs. There were five or six of them blaring the bloody match. The place is crowded with the gormless, mouths open, intent on the irrelevancy of the Premier League. I can't settle so I depart in exasperation after one pint - papers half read. Maybe I should move to West Cork. It wouldn't happen in Hackett's.
Posted by Ardmayle at 12:51 PM 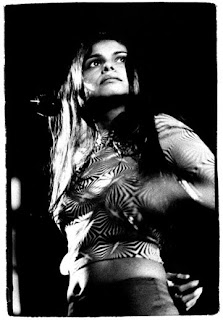 What an extraordinary concert it was. The entire gig was performed in darkness with the band occasionally illuminated by the surreal films that were projected onto the back of the stage throughout the show. We caught glimpses of Sandoval's striking looks, her long skinny legs emerging from a layered white lace skirt, and the silhouette of her impressive embonpoint in a tight black top. But glimpses only. She spent a lot of the gig with her back to the audience noodling with a zylophone while she sang and when she did face the audience she had her hand over the mic at face level so her features were obscured. But the voice was as entrancing as ever. And the band and the film meshed with it perfectly to give us a memorable show.
Posted by Ardmayle at 2:55 PM