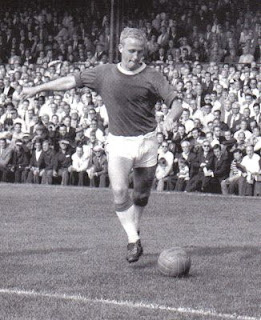 An unexpected treat on BBC4 last night - a black and white film by Ken Loach (or Kenneth as he was then) called "The Golden Vision", based on the antics of a bunch of Everton supporters in the Liverpool of 1968. We get loads of wonderful period detail: the intruding priest (Everton were always the Catholic club), the bevvies, the pregnant birds, the long-suffering wives, Soho strip clubs, atmospheric slums, and moody shots of the towering stadium. You got Loach's political point - the energies of grown men totally absorbed by the great frivolity of football. But there's also the warmth, wit and camaraderie of the fans - amidst the deprivations of their daily life they keep their spirit and their sense of humour.

But the real treat for me was the interviews with the players from that era and the glimpses of various matches. That was a golden age for Everton, just after their famous 1966 FA Cup final win against Sheffield Wednesday (take a bow Mike Trebilcock) and just before their unexpected loss in 1968 to West Brom (hang down your head Jimmy Husband). I was a big fan myself in those days and the names still worked their magic. The solid and honest Brian Labone, the slight and mercurial Alex Young (the "Golden Vision" of the title) who looked like a minor Roman Emperor with his classical features and his blonde crinkly hair,
and the sublime Gordon West in goal with his film star looks and his hilariously short shorts. I remember him in the 1968 cup final when he didn't kick a single ball but rather threw everything - all the better to retain possession for a team that played elegant football. There was also the urbane Ray Wilson who played in the England World Cup team of 1966 - he was interviewed as he smoked his way to London on the train for a match against Arsenal. We caught a glimpse of the great Harry Catterick whose successful reign as manager was cut short by illness; and Everton's blimpish chairman John Moores who saw football as a device for keeping the masses under control by dissipating their energies.
Posted by Ardmayle at 1:32 PM