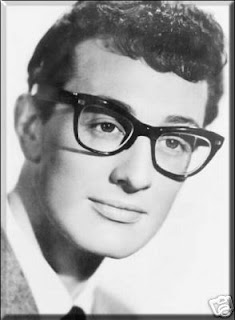 Today I remember Buddy Holly. It's exactly 50 years since he took the ill-fated flight into a snow storm that ended in an Iowa corn field. It's hard to believe he was only 22. His songs were the soundtrack of my adolescence. I was especially drawn to the more love lorn ones such as "Learning the Game", "Raining in My Heart" and "What to Do" ("The record shops and all the happy times we had, the soda shops, our walks to school, now make me sad"). Oh boy.

I remember first hearing him on Radio Luxembourg in the late Fifties along with the likes of Elvis, Fats Domino, Little Richard and Eddie Cochran. But he was dead before I really got into his music. Our local hops at Collins Tennis Club were musically advanced and I watched through the windows as the dapper older boys jived to "Rave On" and "Oh Boy". But mostly I listened to him on my own and yearned in unison. I bought his first LP, mostly recorded just before he died and wore it out. I can still see the large black and white image with the horn-rimmed glasses. Later, when they were shamelessly marketing his out takes and discards, I bought my bemused younger (and very young they were at the time) brothers singles of "Look at Me" and "Listen to Me" for Christmas.

He should never have been touring of course but he'd been screwed by his manager Norman Petty and having broken free he had a pregnant wife to provide for and no money. He wasn't to know the success that "It Doesn't Matter Anymore" would enjoy. His influence is to be seen in the Beatles (who took their name in homage to Buddy Holly's Crickets) and the Stones who made "Not Fade Away" their own. But mostly he was my first great musical crush and every time I hear him I feel a strong connection with that magical era when rock music was born and I was young and pleasantly miserable.
Posted by Ardmayle at 5:44 PM