Red by John Logan at the Donmar Warehouse 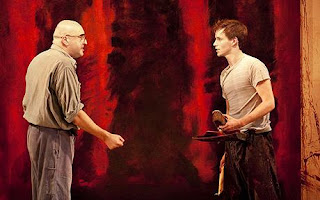 I do love the Donmar - a theatre with no safety net. The audience sits around the edge of the stage on three sides, or looms over the action in the balcony. It gives it an intimacy and immediacy that is lacking in a more conventional theatre. Given its modest capacity it's inclined to go for more experimental theatre and its audience is invariably young and right on.

I hadn't read any reviews of Red but it had two things going for it: the estimable Alfred Molina was appearing and it was about the last days of Mark Rothko - when he was wrestling with his conscience and the the Four Seasons commission. It turned out to be truly outstanding - Molina as Rothko and Eddie Redmayne as his assistant were on stage for 100 minutes and there wasn't a false moment - except for one or two of those slightly pretentious ones that discourses on art tend to provide. In addition to Rothko's stricken conscience, as he tried to reconcile art and mammon, the play dealt with the barbarians at the gate as Abstract Expressionism was being threatened by pop art and the garish and glib offerings of Warhol, Jasper Johns and Lichtenstein. But these forays into art history were never dull as the passion of the protagonists brought them to life. There was lots of physical business taking place in the studio where the play was set. Paintings were moved and paint mixed and every now and then the white back wall was exposed - bedecked with drips of gore from the red canvases. There was one beautifully choreographed piece where the two characters primed a giant canvas in unison. Both actors ended up covered in scarlet paint - another intimation of Rothko's bloody end.
Posted by Ardmayle at 5:09 PM