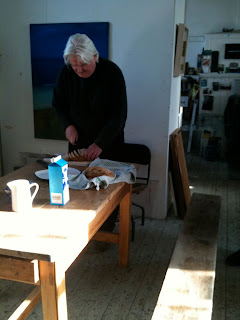 Went to Sligo last weekend for an opening in the Sligo Art Gallery. Our first stop was Drumcliffe Churchyard to visit Yeats' grave. It's been tarted up since I last visited about 20 years ago. There's now a large car park and a bloody interpretative centre. However, the graveyard itself is untouched and there's still the wonderful unobstructed view of bare Ben Bulben.
The show in the gallery was of small works by members of the Graphic Studio Dublin in response to the poems of Yeats. It was a low-key event but the work was attractive and affordable. I bought an exquisite Stephen Lawlor piece entitled Glencar. A lot of the artists were present and we all repaired to Hargadon's pub in O'Connell Street afterwards. This is a great old pub full of nooks and snugs and mercifully free of the accursed television. And the pint was first class. Later we moved on to a French restaurant called Montmarte. The service was glacial but the food and the company compensated.
The following day we were invited to visit Sean McSweeney and his ever amiable wife Sheila in his studio out past Lissadell (which sported a large Closed sign). Sean had been at the centre of the drinking proceedings the previous night but was there hale and hearty to greet us at midday. Not bad for a 75 year old. The studio is a converted national school - formerly Ballyconnell National School for Male and Female infants - as the plaques outside testify. Although Sean is going through a dry spell at the moment the studio is tantalisingly full of past work - but it was not a time for negotiating art deals. There was a group of five of us and after a tour of the building we sat down to an excellent lunch of coffee, homemade brown bread and some local smoked salmon. The studio is idyllically situated amidst farmland with a brief walk to the sea and Ben Bulben and Knocknarea looming in the background to remind you of your heritage. 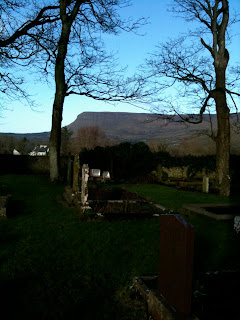