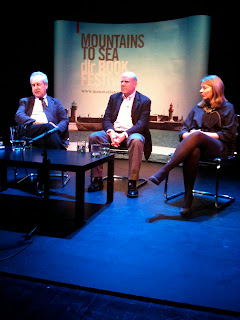 Attended the symposium on J G Farrell at the Dun Laoghaire Mountains to Sea book festival last weekend. It was chaired by Lavinia Greacen - his biographer and all-around good egg, in a West-Brit gushing enthusiast kind of way. Although she is clearly a Farrell fan, her biography did include the warts, noting his emotional detachment and utilitarian attitude towards women. The panel included Greacen, John Banville, the nervy Rachel Cooke (the Observer writer), and a big amiable historical fiction writer whose name I have forgotten.

The sardonic and world-weary Banville was quick to prick the general veneration - attacking on two fronts. He described Farrell as "guarded and sinister with a creepy elegance." His major work Troubles he reckoned was too "finished and controlled" - whereas great novels should be "loose baggy monsters". Not a description that could be applied to much of Banville's oeuvre. He did praise Farrell as being "completely amoral" in his work - the "first requisite of the artist". He concluded by opining that he had died at the right time. His last novel, The Singapore Grip, suggested that he was waning as an artist. He lacked the engagement or passion to take things to another level. His letters and diaries were never ecstatic or despairing - he was always on an even keel. There were no wells from which to dredge material. Rachel Cooke hardly agreed suggesting that his work was "suffused with melancholy". She also took umbrage at Banville's playful suggestion that he might have improved as an artist if he had married a shop girl and the real world had intruded more. Well that certainly worked for Joyce.
Posted by Ardmayle at 7:11 PM