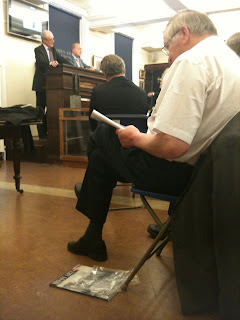 In marked contrast to the recent de Vere event there was a very lively and successful auction at Adam's last night. There was a decent crowd and some lively phone bidding. I noticed John de Vere lurking in the wings -taking note no doubt of where he went wrong. Adam's clientele are noticeably different to those you see at Whyte's and de Vere's - there's a lot of old Dublin professional money about, unaffected perhaps by the recession. You see it in the clothes (brogues, waistcoats, old jewelry etc.) and the general air of confident entitlement. There are a lot of husband and wife teams and a fair percentage of older women.

Adam's has always stuck to the more conservative and traditional side of the art market and were often regarded as a little old-fashioned compared to Whyte's and even de Vere. They have however a loyal following who don't follow contemporary trends and consider the presence of a painting in an Adam's auction as a kind of imprimatur. I stayed for the first 100 lots and 86 of these sold - most of them well above their lower estimates. These works were mostly safe conservative landscapes, portraits and still lives by dead artists such as Frank Eggington, Charles Grierson (who?), Frank McElvey Nath. Hill and Charles Lamb. A good quality Paul Henry went for €72K. The most adventurous works sold were the two Colin Middletons for €11.5K and €13.5K - one of these was well below mediocre. Most of the living artists on view did badly although there were good reasons in a few cases. A huge unwieldy Shinnors triptych was withdrawn at €45K, an overpriced John Doherty at €24K and a truly dire Blackshaw at €22K. Even the normally reliable Camille Souter failed to sell and was withdrawn at €7K. A number of early and poorly framed O'Malley's also failed to sell.

Overall though this auction showed that there's a decent market for safe paintings by reputable names - preferably dead.
Posted by Ardmayle at 2:23 PM