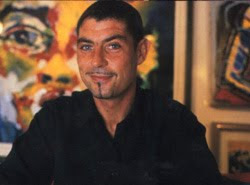 I was saddened to hear of the recent death of the Cork-born artist Kieran McGonnell. He had an accident last October shortly after moving to Chicago from New York and was in a coma until he died last week. I didn’t see Kieran that often – we met a few times in Dublin and New York and once, the last time I saw him, a couple of years ago in Cork. However we kept in touch regularly via Facebook and e-mail.

Kieran was a uniquely nice guy. Even a natural misanthrope like me found it impossible not to like him from the first. He had a joie de vivre about him that was infectious. He was gay and occasionally tended towards campness but he also had enough of the acid of Cork in his blood to keep him earthed. He also had the most crazy and intense blue eyes. We liked to talk about Cork and about CBC the school we both attended. We also shared a background involving Collins Barracks and the military. But mostly we talked about art for which he was an enthusiastic advocate and tireless exponent.

Although he varied his media in recent times, the majority of work that I saw was large-scale water-colours in very bright colours – he especially favoured yellow and red. He also specialised in amusing titles. A giant piece (10 feet x 4 feet) I bought for my company rejoiced in the title “The Prioress Parades her New Wimple”. In recent years he started doing portraits of famous artists (Van Gogh) and American presidents such as Obama and Lincoln. These were geared I suspect to the poster market he was building. 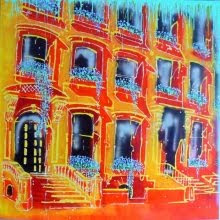