Into the Abyss Margaret 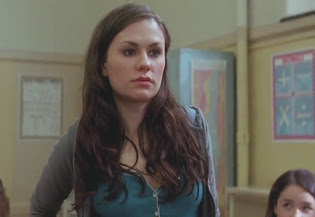 I don't get out to the cinema enough. Every time I do I am reminded how much more powerful and engaging an experience it is than tv or computer. A law of diminishing returns obtains.

I went to two films at the Dublin International Film Festival last Tuesday, Werner Herzog's Into the Abyss and Kenneth Lonergan's Margaret. They were both oustanding although I had to endure the baritone snuffling of Lonergan for much of the latter film - the director was sitting beside me (he did a Q and A afterwards) and seemed to be having sinus trouble.

Into the Abyss was Herzog's examination of 3 senseless murders in small town Texas and the repercussions for those involved and their families. It was mostly talking heads with the occasional venture into crime scenes and death row. It featured a clearly deranged and damaged Michael Perry interviewed shortly before he was executed and his handsome and creepily affectless accomplice Jason Burkett - who escaped the death penalty thanks to his father's intervention. These two characters were however less interesting than the attendant cast of victim relations, prison guards, and a death row groupie. Herzog's camera stared unblinkingly into their souls. The prison guard and Burkett's father were particularly articulate. After officiating at more than 50 executions he had a breakdown following Karla Faye Tucker's. He quit the prison service and walked out on his pension. Burkett senior was doing life just like his son and had the grace to feel ashamed at the bad influence he had on him. In a fine example of gallows humour Perry smilingly warned Herzog to

get out of Texas as soon as you can

Margaret featured one of the most annoying heroines in the history of the cinema. I defy anyone to watch Anna Paquin's performance and not feel the urge to give her a good slap. Lonergan was big on urban alienation (in New York) and the healing power of music - specifically opera, and more specifically Norma. Some of the shots of the city at night (monolithic partly lit buildings) with accompanying music were sublime. The action revolved around an accident caused by Paquin and its repercussions but the film was more an examination of a teenage monster and the chaos she caused in the lives around her. There were some painful mother and daughter set pieces and all kinds of engaging side shows. Check it out.
Posted by Ardmayle at 4:41 PM