Louis in the Sky With Diamonds 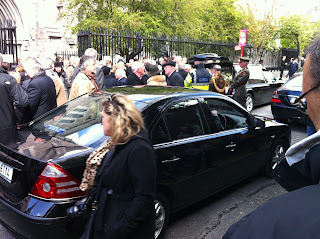 I attended the memorial service for Louis le Brocquy in St. Patrick's Cathedral yesterday (28th April 2012). It was presided over by the cathedral Precentor Robert Reed - presumably because the new Dean has yet to be installed. Reed, a homunculus resplendent in floor-length black and gold cloak, greeted the congregation and did a fair amount of meaningful marching up and down the aisle accompanied by a cast of characters who would do justice to a Mervyn Peake novel.

There was a good turnout but a few empty seats. Our president was there with wife and aide-de-camp, Irish arts royalty abounded including Seamus Heaney, Camile Souter, Sean Scully and Bono. There were also a number of dealers, gallery owners, and members of the legal profession. There were surprisingly few ordinary decent artists. Maybe the le Brocquy team's notable froideur has alienated many on the contemporary scene. Although an agnostic le Brocquy had asked for his memorial service to take place in St. Patrick's - conscious no doubt of aesthetics to the last. He was also quoted as liking its "vaguely ecumenical" role. The music featured Mozart's very moving Requiem. The full choir was in attendance and we were treated to a sublime concert.

There were three addresses of varying quality. First up was the Abbot of Glenstal Mark Patrick Hederman. He spoke in a slow measured way with much ornate phraseology. He described LLB's art as "a porthole into the bathysphere of our consciouness". He went on to describe the head as "a magic box containing the spirit, behind the billowing curtains of the face". Nice. He also quoted an epiphany LLB had on a sunny Spanish afternoon where he realised that "light was a matrix from which the human being emerges". There was only one bum note in his speech. When speaking of LLB's head paintings he listed all the creative geniuses portrayed: Shakespeare, Picasso, Yeats, Beckett, Joyce, Swift, Lorca and Bono. Hmmm. There was a lot of good arcane stuff about the Paraclete and the Holy Spirit and he even threw a sop to the groundlings when he spoke of the afterlife and "Louis in the sky with diamonds."

Anthony Cronin, major Haughey apologist and minor poet, was due to speak after Hederman. However the poor man was too crippled (he uses a walker) to make it onto the altar so they led him to a small mike and he declaimed (in a sturdy voice) a short poem called Completed - his own I believe. Then Seamus Heaney took to the pulpit to give a personal and heartfelt tribute with much quoting of Auden and Yeats. He spoke of LLB's intellectual rigour and happy gatherings at Lugalla - Garech de Brun's Wicklow fastness.

The final speaker was Barbara Dawson from the Hugh Lane Gallery. Her contribution although brisk and efficient was somewhat marred by the number of self-aggrandising references to her gallery. She also failed to mention that when LLB offered the Hugh Lane his masterpiece The Family it was turned down. It's now of course housed in the National gallery.

Leaving afterwards I saw two of our leading abstract artists Sean Scully and a scruffy Felim Egan driving off together in a big 2011 Merc. It's nice to see that they retain some interest in the material.
Posted by Ardmayle at 2:24 PM