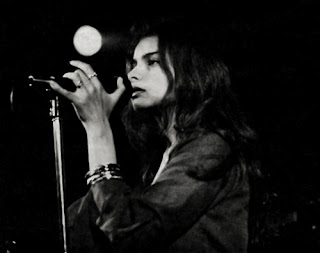 I trekked along to the Forbidden Fruit festival at IMMA yesterday - mainly drawn by the promise of seeing Hope Sandoval and Mazzy Star. The portents were promising. It was a glorious sunny day and the concert site was showing no signs of distress after two days of inclement weather and hard partying. I noticed rubbish collectors in constant motion. The arena was colourfully bedecked with giant flowers and the perimeter lined with food outlets offering sushi, gourmet burgers and all kinds of other goodies. The crowd were mainly in their late 20s I'd say and there was almost no evidence of drunkenness - even late in the day.

We were early so we found a seat looking down on the main stage and settled back to enjoy the sun and the music. I had only heard of a few of the acts but was immediately impressed by Andrew Bird and his band - in fact we left our strategic perch to stand just under the stage. He sang, played guitar, violin, a glockenspiel and even whistled a bit. it's hard to categorise the music but it certainly rocked and he ended with a very impressive version of Townes Van Zandt's If I Needed You.

An amusing side show,  as we watched Bird, was an ever-expanding team of lesbians nearby. It started with a group of four, all in black, all short and sallow with some very ornate piercings (right ears mainly), elaborate head shavings, and bracelets. Two of them were strikingly beautiful. They looked like they had come from New Mexico or somewhere sunny, arty, and exotic. There was a fair amount of physical contact between them - beyond friendly. As time moved in they kept being joined by other small groups, including what looked like a couple of local apprentice lesbians - these lacked the style of the original group. They included one with an unfortunate resemblance to Elton John and a tall, pallid, cropped, very weird looking androgynous creature  - who radiated psychic unease.

Impressed by Mister Bird we stayed to the end and then moved on to the comedy tent. A mixed bag. The MC was plain unfunny - three very drunk, and very young,  girls tried to disrupt things but were crudely and rather cruelly put down. The highlight was a guy called Jarlath Regan - personable and intelligent stuff.

Then on to the smaller tent for the Mazzy Star gig. We got there early and bagged a spot just under the stage. The band as always are  relentlessly cool - incorporating a pedal steel guitar into their hypnotic grunge. As usual the back of the stage is used as a screen for a series of striking and surreal images. Time has not yet transfixed the flourish set on Hope Sandoval. She's still strikingly beautiful and retains that ethereal slightly other worldly presence. She rarely smiles and seems extremely self-conscious - hands on hips, hands behind her back, hands playing with the mike, hands occupied with a tambourine or the maracas. But such beautiful hands - long elegant fingers. And she rarely faces the audience - preferring a side on profile. The expression is one of slight alarm combined with an exasperation at her situation. She's famously shy.  For a flavour of her performance check out:  http://tinyurl.com/d6vadv6  Try the Blue Flowers video especially.