The National Gallery was packed out (no room in cloakroom for latecomers) last night for the launch of the annual Turner exhibition.  It wasn't the standard arty crowd that you might see at IMMA or the RHA.  This lot mainly featured clusters of over-dressed middle-aged women, hard-faced men in suits,  and a plethora of those officious biddies that administer the arts in our institutions.  I overheard a number of foreign accents so maybe the diplomatic corps were in attendance - supporting the British Ambassador who opened the event.  Hennessy sponsored the launch so we were offered various brandy cocktails on arrival, including a delicious hot brandy and cassis confection that went down well (twice).  We were forced to sing for our cocktails by enduring four  speeches before we could view the art.  Three of these were dull and worthy, but the fourth,  performed with panache by the British Ambassador Dominick Chilcot, was well turned and witty.  You can't beat that Oxbridge polish.  He mentioned that he had stood up Tessa May (his Home Secretary) to be with us - bringing  an appreciative laugh from the assembled worthies.  He also noted that Turner and Shakespeare shared a birthday.

Eventually we were allowed upstairs to view the work.  I wonder about this annual limited season for the Turners.  I suppose it gives them a spurious cachet - like creme eggs.  It's certainly wonderful PR for the National Gallery and it does focus attention on art - always a good thing in this country where most people don't give a fart through their corduroys (as Beckett maintained) for it.  And yet the works are slight and modest enough - some mere sketches for larger pieces.  Only one or two hint at the drama and power of Turner's major works. 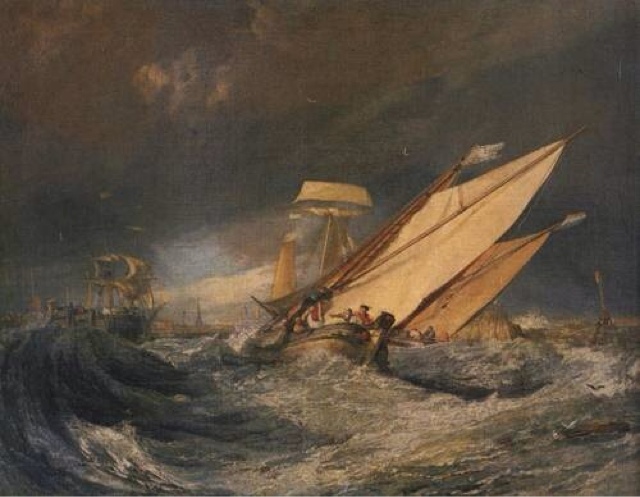