Cymbeline at the RSC 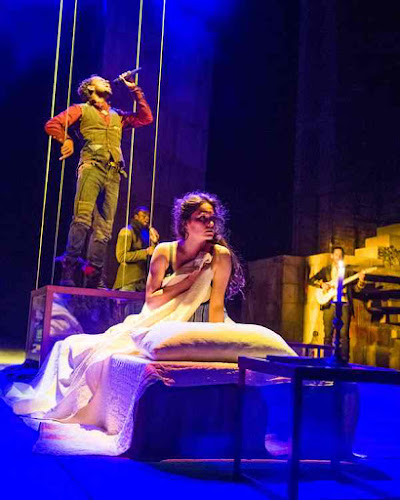 I do enjoy my occasional visits to Stratford-on-Avon - a town dedicated to Shakespeare and tourism, with some decent restaurants (especially the Scullery) amidst the twee shops. It's great for strolling around with interesting buildings, some nice walks along the Avon, and along the canals where there's plenty of barge activity. And of course each visit must be build around an RSC production. This time it was Cymbeline, a play I had never seen performed before. The only bit I know is the famous lament for Innogen: "Fear no more the heat o' the sun ..." - often recited at funerals. I remember Hilton Edwards declaiming it at the funeral of Micheál Mac Liammóir. Perusing the cast list beforehand I see that Cymbeline (the King of ancient Briton) is played by a woman. Also, one of his long lost sons, is also played by a woman. Ho, hum. Now Cymbeline is one of these slightly annoying plays by Shakespeare where the audience must work hard on suspending their disbelief as one of the characters adopts a disguise as a member of the opposite sex - in this case Innogen, the main female character. Twelfth Night has a similar scenario. It's quite clear to all of us that it's the same person but not of course to the characters in the play. So adding to this confusion by changing Kings to Queens and sons to daughters is compounding Shakespeare's confusion. Also, a large proportion of the cast are black which seems historically dubious if politically correct. As I'm on the subject of appearances, the actor playing Posthumus (Innogen's beloved) is small and wimpy while the aspiring and despised lover Cloten is tall, imposing and far better looking. Open your eyes girl.

But these are all superficial criticisms, the production generally is more like a pantomime than a play. The language gets lost, often literally, as the director Melly Still introduces French, Italian and even Latin dialogue - projecting the English version on the walls of the set. Still is a designer by trade, and she's accompanied by Anna Fleischle another designer so guess what - there's an emphasis on design elements and a deeply eccentric assortment of costumes: tutus, caveman outfits, sharp suits etc. Shakespeare should be all about the language but it gets buried amidst the alarums, excursions and pyrotechnics - smoke, streamers and percussion. The story, such as it is, gets lost along with the language so we settle back and enjoy the colour, the music and the movement. There is one beautiful, lyrical interlude where the lament for Innogen is accompanied by sweetly apposite music. Otherwise it's fun and spectacle but hardly what I wanted from an RSC production. Two stars.

Posted with Blogsy
Posted by Ardmayle at 3:39 PM