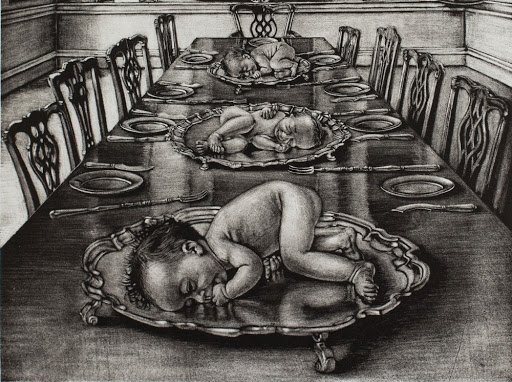 An edited version of this review appeared in the Sunday Times Culture magazine on the 2 April 2017.

The Cavanacor Gallery near Lifford is attached to an historic 17th century house that hosted James II during the Siege of Derry. David O’Kane (a son of the current owners) didn’t try to sit out the recession but took his award-winning talents on the road after graduation. Based in Berlin, he exhibits successfully in prominent galleries in Leipzig and Seoul. He is a versatile artist who is best known for his large-scale figurative paintings, often with an uncanny twist, but who also embraces printmaking and animation. His current show is a series of manière noire lithographs based on Swift’s infamous essay A Modest Proposal. These were commissioned by the Salvage Press to celebrate the 350th anniversary of Swift’s birth. These macabre and exquisitely executed works take Swift at his word and present us with the results of his proposal. A splendid dining table is furnished with platters of chubby babies, a butcher’s shop hangs a boy amidst the sides of beef, and Breeders shows a line of coffin-like cots, the latter piece carrying intimations of recent events in Tuam.