From West Brittany to Wolverhampton - A Tale of Provenence 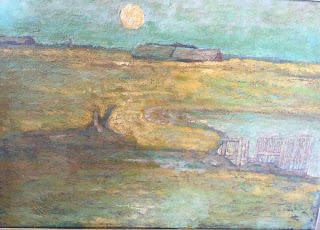 There was an amusing example of provenance by inference in the antiques section of Saturday’s Irish Times on 12 May. In a puff piece about Sheppard’s impending auction of the contents of Lissanisky House in Durrow (15/16 May),  Arminta Wallace writes about an interesting painting on offer by Frank O’Meara, the Irish impressionist artist who died of malaria in 1888 at the age of 35. He was, we are told, the grandson of Barry O’Meara, a former owner of the house, who was Napoleon’s physician on St. Helena. (Speaking of the history of the house auctioneer Philip Sheppard says in the article: “What we do know is that at one time it belonged to Napoleon’s physician”).  The painting (Lot 62) is entitled West Brittany: A Coastal Relief and it has a very reasonable guide price for an O’Meara of €3,000 to €5,000.

The casual reader of Wallace’s article would be forgiven for assuming that the painting had remained in the erstwhile family home over the generations. Not so I fear. When I spoke to the auctioneer Philip Sheppard he was quite open about this not being the case. “It came recently from a long-standing client of ours, a private collector.” The impending sale, he told me, includes both the contents of the house and additional items from other clients of the auctioneers. Sheppard disagreed when I suggested that the client in question had taken advantage of the O’Meara connection to place the piece in a context where an inference could be made about its provenance. He maintained that few would make the assumption that a work painted 60 years after Barry O’Meara’s brief tenancy would have found its way back to the house. However, Arminta Wallace’s article was unfortunately devoid of these pertinent dates and facts, leaving the distinct impression that there was such a connection.

The prosaic truth of the matter is that this particular O’Meara came from Cuttlestones Auctioneers in Wolverhampton where it was sold in November 2017 for £380. The UK auction house clearly had no idea what they had – although in fairness O’Meara is hardly a household name in Irish art circles either. The prescient buyer at Cuttlestones brought it back to Ireland to hang briefly where the artist’s grandfather had once lived briefly. A tenuous but romantic connection. Regarding its provenance prior to its sojourn in Wolverhampton we know nothing. The auctioneer has faith in his “longstanding client”. Those qualified to judge deem it a genuine O’Meara, the signature, the subject matter and even the canvas type all fit. There were a few interested parties at the sparsely attended auction and it sold to a well-known Dublin art dealer for €9,000. The buyer is a man noted for his strictness in matters of provenance so we should assume it’s the genuine article.