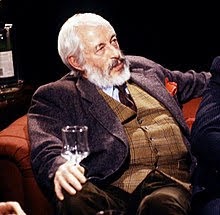 J. P. Donleavy is a bit of a conundrum. A failed painter who wrote the most commercially successful novel to emerge from Ireland. An Irish-American who despised Ireland yet ended up living the bulk of his life in County Westmeath. A native of Brooklyn who spoke with a faux ascendancy accent and affected the dress of an English country gentleman. A writer whose initially energetic sub-Joycean style slackened into mannered tedium (with those silly alliterative titles). Yet we can forgive him all his foibles and later failings for the gift of The Ginger Man - novel that came along in the mid-1950s when fun was forbidden and the Church ruled the land. It plunged us headlong into a world where responsibilities are discarded in the headlong pursuit of drink, women, and the occasional sheep’s head for sustenance. It championed freedom of expression in a censorious era and it made us laugh. The sexual frankness was also a boon back in those times – especially to teenage boys. Today the most shocking element in the book is the verbal and physical abuse its protagonist Sebastian Dangerfield visits on his long-suffering wife Marion.

Bill Dunn, an expert on lighthouses, and a self-declared “longtime fan of J. P. Donleavy” has put together a selection of the correspondence between Donleavy and two of the main sources for The Ginger Man: Gainor Crist and A. K. Donoghue. Their letters date from 1948 to 2006 so the bulk of them are between Donoghue and Donleavy as Crist died in 1964 (aged 42 in alcohol-related circumstances). All three were Americans abroad - at Trinity courtesy of the G.I. Bill. Donleavy described Donoghue as “the introducer of blatant honesty to Ireland” and the ginger-haired Crist was admired for his charm, his heroic drinking and his success with the ladies. He was immortalized as Sebastian Dangerfield in The Ginger Man and elements of Donoghue are evident in the character of Kenneth O’Keefe. While Donleavy thrived on their fictional personae, his subjects struggled in real life. Donoghue eked out an existence in a series of dead-end jobs back in the USA (camp counsellor, mortician, and gambling consultant amongst them). He also had a disastrous sex life which he described with relish to the eager Donleavy. Crist was also employed erratically and his oft-touted charms seem to have been more apparent to those who met him in the flesh than is evident from his fictitious persona or these letters. He lived a life of alcoholic fecklessness. When around, he was apparently a loving father according to an affectionate and forgiving appendix written by his daughter Mariana. Donleavy’s relationships with both of his correspondents ended badly – ostensibly about bread in one case and cheese in the other.


Despite his Irish-American parentage, Donleavy was no great lover of Ireland. He  came to Trinity because he could not get into an American college and he returned to Ireland from England to avail of the tax advantages we offered to writers. He expressed his contempt frequently: In his 1994 autobiography (“agricultural, paupered, myth drugged greenery that is Ireland”); In his 1992 documentary J. P. Donleavy’s Ireland (“a shrunken teat on the chest of the cold Atlantic”) and in these letters (“I hate the thought of the place and I don’t know why I’m going”). Even when he settled on his 180 acres in Levington Hall in County Westmeath he affected disdain for his surroundings: ” I read the Daily Telegraph and I may as well be living in Timbuktu for all the number of times I go outside those gates” he told one visitor.


Those expecting literary discussions in these letters will be disappointed. This is not Nabokov and Edmond Wilson. The concerns are more quotidian: jobs, accommodation, travel arrangements and money.  A certain puerile, school-boyish tone persists even when the writers are in their forties and older. “No woman is going to let me slip my 6 incher into her sacred port hole” complains Donoghue. Patterns soon emerge about their individual reasons for maintaining the correspondence. Crist was chronically short of money and always looking for another adventure: “Would you please send me $25 – I am requesting non-material but material aid as well”.  Donoghue wrote mostly, it seems, to entertain Donleavy by recounting details of his latest dead-end job and his latest sexual failures – of which there were many. “I seem to inspire in women a desire to marry or fuck someone else.”


Donleavy, even when he became very successful, was keen to maintain this connection and would chide Donoghue when there were long gaps between letters. He would repeatedly request more details about his work, his latest amatory mishap, or the part of the USA in which he currently resided (“Did you know the Mormons never gave up polygamy formally”). A Fairy Tale of New York involves a character working in a funeral home, one of Donoghue’s many jobs. Donoghue was a faithful dog to the last. Years after Donleavy kicked him out of his Westmeath gate lodge and stopped replying to his letters, Donoghue wrote from his grace and favor retirement home in Donegal giving Donleavy “full permission to write anything he feels like writing about me, positive, negative and otherwise.”


Donleavy was in some ways an accidental writer. His first love was art and he had a number of exhibitions in Dublin before The Ginger Man was published. After his writing career had petered out he continued to paint and was showing at the Molesworth Gallery in Dublin as recently as 2017.  When he tried to show outside Ireland’s stagnant art market in the early 50s he was rebuffed. The Redfern Gallery in London spurned his advances and he then determined that he would show the world: “I would write a book that no one could stop and would make my name known in every nook and cranny all over the world”.

Dunn the lighthouseman has, through these letters, shone a revealing light on the lives and characters of Donleavy, Crist and Donoghue. Donleavy’s rich and varied life (travel, famous friends, fine wines) sits in sharp contrast to the struggles and sad declines of the other two: The restless and needy Crist killing himself with drink and the permanently rueful Donoghue, making a virtue of his parlous career and ruinous love life. What’s revealed about them is far from the bohemian glamour and romantic myths of that storied time in Dublin literary history. This is the base metal mundanity that Donleavy managed to spin into gold.