The Quest for the Holy Well of St. Féichín 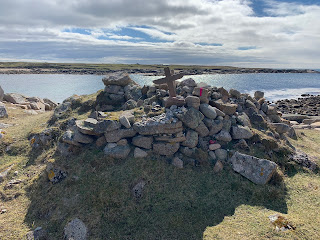 It’s nice to have a goal when you set out on a walk – especially when you’re in an area with which you are unfamiliar. So having having secluded myself in Connemara for a few weeks I took to exploring my hinterland. I enjoyed the sandy but circumscribed Dog’s Bay, took the arduous route up Diamond Hill, and  walked around the old industrial school graveyard in Letterfrack. However, Omey Island was my most frequent destination. It has three sites that seemed worthy of exploration:  a 7th century monastic site, a famed holy well, and the octagonal building which the poet Richard Murphy built as a writing space. Although you can drive across to the island at low tide (and for two hours before and after it), it’s a nice walk that takes only 12 minutes or so from Claddaghduff.

The island is privately owned by seven different farmers so there are no OPW signs to guide you on your way. I headed for the graveyard a couple of 100 meters to the right of the road onto the island. It’s worth a mosey around for its epic location alone but also has a large number of famine graves and some impressive Celtic crosses. My initial goal was to find Teampaill Féichín, a recently uncovered medieval church built on the site of a 7th century monastery founded by the aforementioned saint. This was no easy find as it lies in a hollow inland from the coast line. I took my guidance from various Connemara guides on the Internet. They all counseled approaching the site from the beach so I began following the beach around the right of the island. When it came to moving inland I was deterred by the barbed wire that seemed to fence off most of the perimeter. I guessed where the site might be and took the risk of opening a gate and venturing inland. The ground was very marshy and was glad of my Wellington boots. I wandered around a bit aimlessly until I espied a small, octagonal structure that must be Richard Murphy’s eyrie. It was built on a rocky height with a commanding view out towards High Island. It is a very ugly building – a spartan space with just enough room for a desk and a chair and perhaps a heater. Very cell like. I’d had enough clambering and walking and so made my way back via a nearby road that led off the island. There would be another day.

A few days later I came armed with a local archaeologist. He ignored the advice about approaching the site by the beach. We drove onto the island until just before the end of the paved road. We then set off across a wide expanse of sandy grass between fenced off fields. We forded a narrow stream and walked around the perimeter of the large central lake to our right. Ahead of us was a lengthy barbed wire fence. We turned left and followed the fence. We kept walking until be saw a stone gable peeping up from a depression ahead. We had reached Teampall Féchín. The walk took about 20 minutes from where we left the car. I got the added bonus of a detailed lecture from the archaeologist who formerly worked for the OPW. He also told me that unless there was some conservation done on the site it would soon collapse and be reclaimed by the sand dunes. Getting the 7 owners to agree on a conservation policy was apparently a problem. So get there while you can.

So two out of three sites achieved – now for the holy well. It was supposed to be near enough to the old church so when I returned a few days later I just wandered about in the general area hoping to happen upon it. It was a pleasant, scenic walk but not a sign of the bloody well. The next time I came back I went for a quasi-scientific approach, based on walkers’ experiences – I knew it was close to the beach so I parked my car near the end of the road and took off anti-clockwise around the edge of the island. It was tough going involving much clambering over rocks. Eventually I had to give up as Missy wasn’t able to climb over one particular wall and became very distressed at our separation. (She’s very protective.) I gave up in defeat. I returned the next day and took a different route going through fields when rocks became an issue. However, still no luck. That night I happened on an ordinance survey map of the island in the house I was renting. The place names were in Irish but I was able to find the holy well and based on my earlier explorations ascertain exactly where it was. If I had started to walk anti-clockwise around the island about 100 yards to the right of where I actually started I would have happened upon it.

So here are the definitive instructions for finding the holy well of St. Féchín:

1.     Drive your car (or walk) to the end of the paved road and onto the muddy track a hundred yards beyond it.
2.     You will pass a handsome grey stone house with a sky-light on your left and ahead of you also on the left are two ugly caravans. Park.
3.     Straight ahead is High Island – you can almost touch it.
4.     Look to your right and you will see a horse-shoe shaped bay with a small golden strand.
5.     Walk down the slope and cross the golden strand.
6.     Turn left and walk along the grassy edge of the coastline.
7.     After about 200 yards you will come upon St. Féchín’s well cunningly concealed in a dip in the ground.

Having finally got there I was mildly dispppointed to find that the well has run dry. The location is wonderful however and you can admire the various trinkets adorning the site – including bizzarely a dog’s collar.