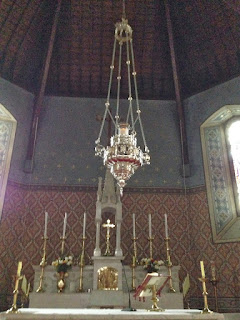 My first cousin, Philip Maher, died aged 80 last Friday. Diana and I attended his funeral in Clonoulty on Sunday. I rarely met Philip over the years so have two memories only of him. One was of a quiet, unassuming teenager with a passion for horse and dogs who I met briefly in Cashel back in the late Fifties. And the other was as a very frail, elderly man sitting in his living-room near Clonoulty last November. Of his life in between I knew very little – we rarely encountered that branch of the family as his father (my mother’s brother) died prematurely and the family disappeared into rural Tipperary and a couple of them later emigrated to the USA. We lived in Cork and later Dublin. I knew he had never married and latterly lived with his sister - that’s about it. As I parked the car near the church in Clonoulty, I saw that the area around the church was crowded. Coming towards me marching down the main (and only) street was a phalanx of young men carrying the coffin. They were wearing the distinctive green jerseys of the Clonoulty-Rossmore hurling team. This small parish team had outdone itself by winning the county championship a few years ago and was the club of the legendary Declan Ryan who had distinguished himself in the Tipp jersey – winning three All-Ireland medals and later managing the county team. The street through which they passed was lined with spectators – I suspect the whole village was out and many more from surrounding areas. (Probably as many as were at the Sinn Fein funeral that generated all that fuss earlier in the year.)  A great turnout was the common view.

Inside the church there were about 100 people, spatially distanced and wearing masks. My mother's family are from this part of the world and the church in Clonoulty contains a sacred family relic in the form of a handsome sanctuary lamp (see image). It had been donated to the church in memory of my grandfather Nicholas Maher who drowned aged 39 in Tramore in 1919 - leaving a young family. On and earlier visit to the church my gimlet-eyed brother had espied an inscription etched in the bottom of the lamp:  "To the memory of Nicholas Maher esq. Ballymore House from his loving children June 1925". There it hung, a poignant reminder of an old family tragedy. The funeral ceremony was very traditional in format but was accompanied by some glorious singing from the choir. There were readings from the altar, the handing over of gifts, and Holy Communion. Everyone in the church went up to receive the latter, including all the fine young men in their hurling jerseys.

The highlight of the service was a lengthy eulogy by Thomas Ryan – father of the great Declan and current owner of Ballymore House wherein my mother’s family used to dwell. He clearly knew Philip very well and was very fond of him – he occasionally fought back tears as he spoke. The content of his eulogy was a revelation for me and I’m sure my sisters who were in attendance. This modest, unconsidered cousin of mine had led a very rich, productive, colourful and above all interesting life. His sporting prowess embraced hurling, long-distance running, horse riding, greyhound owning and training, and, dare we say it, coursing. Ryan made specific mention of Philip being an excellent “ground hurler” – a lost art I fear. In later years at the hurling club he performed various roles including that of masseuse where he favoured a concoction of olive oil and poteen. At tense moments during a match he was known apparently to take a swig of this elexir. Notwithstanding all this sporting activity, Philip was a busy and well-respected carpenter and wood-worker. The quality of his work in this area can be attested to by the fact that his two principal employers over the years were Vincent O’Brien and subsequently Aidan O’Brien. Two men who were perfectionists and demanded perfection from those around them. Aidan O’Brien was extremely kind with practical support for Philip and his family when his health failed.

After the funeral mass the party moved on to the Maher family plot in the beautiful old graveyard at Ardmayle. There was a decade of the rosary, another shorter eulogy from a Clonoulty-Rossmore worthy and then a glorious, extended version of the Tipp hurling anthem Sliabh an mBan. It was sung very professionally by a trio of young men, with guitar and some curious flute like-instrument. There was a very large crowd at the graveyard, but it was a well-scattered crowd with little knots of people rather than any mass. Usually in my experience the crowd disperses quickly after the internment but not on this occasion. The clear sky and the beautiful location (a ruined Norman castle across the road) encouraged lingering. We stayed for about 90 minutes identifying old relations and chatting to all and sundry. As we talked to Philip’s sisters Maura and Helen close to the open grave a bunch of the young hurlers were energetically filling it in – clods of earth flew around us as we spoke. Overall it was a very fine conclusion to a well-lived life. The most striking feature of the event was the solidarity of the parish around Philip and the family. It was a wonder to behold for this city dweller.