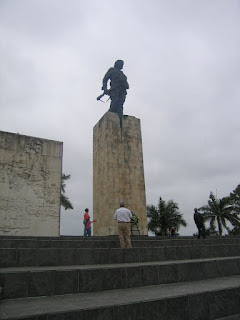 Hiring a car is not to be lightly undertaken in Cuba. The cost is prohibitive and the paperwork formidable. You get the impression that it’s not commonly done.

When you get out on the road you soon discover why. There are no road signs whatsoever so in trying to get on the road to Santa Clara (one of the biggest towns in Cuba) we got totally lost and had to take a local on board for about 15 miles to set us right. A feature of driving on the largely empty roads is the huge number of people hitching – many holding up bundles of pesos to encourge you to stop. It’s the same in Havana where every set of traffic lights has a few hitchers trying their luck.
Also, there are numerous giant potholes that would render night driving extremely hazardous. The complete absence of street lighting means that only the foolish would drive at night in any case.

Anyway off we head to Santa Clara with the Che Museum our main goal. As you enter the town the giant monument of Che dominates the skyline. There is a vast square around it where presumeably ceromonies are held to honour the great man. The museum is under the square and attached to it is the mausoleum where Che’s bones were laid when they were finally dug up from their Bolivian grave.

The museum is a moving memorial to Che’s life. We even get his Irish grandmother’s chair. There is Che as rugby player and young medical student. You see pictures of him on his motor bike and climbing mountains. And plenty of his sojourn in the Sierra Maestra as they engineered the revolution: Che extracting a tooth, Che riding a mule; Che reading Goethe in a makeshift shelter.

The mausoleum in a separate area under the giant statue. There is an eternal flame and each of the 37 rebels killed in Bolivia have a separate niche in the wall decorated with rather insipid reliefs of their heads. There is also a real flower – a small lily - adorning each niche. There is no talking or even whispering allowed while in this area – and this rule is rigorously enforced by the attendants.

Santa Clara itself has little to offer visually but come Saturday night the whole town gets out and struts its stuff in a small square near the public toilets. There is a large and enthusiastic band and everyone, old and young, gets up and dances. Great fun.
Posted by Ardmayle at 4:34 PM