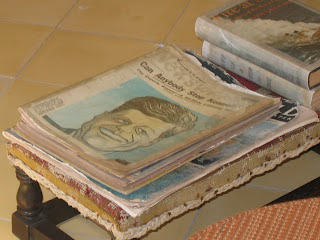 One of the undoubted highlights of our trip was the visit to Hemingway’s old home – the place where he put down the deepest roots and wrote some of his best known books including For Whom the Bell Tolls, The Old Man and the Sea and A Moveable Feast. Hemingway was devastated by the Bay of Pigs invasion because it meant that he could not return to Cuba and this beloved home. He committed suicide 3 months after the invasion.

The house is called Finca Vigía (or Lookout Farm - there is a tower-like structure to the left of the main building) and is set on 15 sloping acres of mango, and avocado trees on the outskirts of Havana. The contents of the house have been preserved as if in aspic, frozen in time. We see his Cinzano bottle, his dandruff lotion, his Glen Miller record, and touchingly one of his signature eye-shields lying on a pillow. I wasn’t much impressed by the candlewick bedspreads – but maybe they were the height of fashion in the Fifties. There’s a Newsweek magazine speculating on the liklihood of a Kennedy presidency.

The rooms are dominated by the results of his big game hunting exploits – the stuffed heads of various deer, buffalo, moose and wild cat. There are also thousands of books showing the breadth of his reading.

You are only allowed look in the windows where each room has 2 or 3 staff doing some desultory dusting or occasionally giving impromptu lectures of the contents of the room they’re in.

Out back Hemingway’s boat is docked forever and there are the suspiciously well-tended gravestones of four of his dogs. A twee touch for such a butch guy.
Posted by Ardmayle at 3:24 PM