In Search of J G Farrell 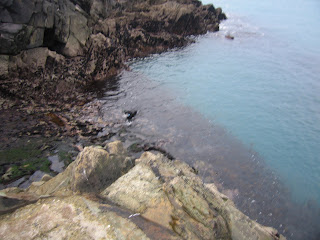 When driving around the wilds of West Cork it’s always good to have a mission so on Friday last I decided to find J G Farrell’s house and the spot nearby where he was swept to his death while fishing. I’m armed with an ordnance survey map and Lavinia Greacen’s biography. The route from Schull involves driving up the east side of Dunmanus Bay and driving down the west side – a journey well worth taking without any ulterior motive. We pass through Durrus at the apex of the bay and head down to Ahakista (site of Ken Thompson’s impressive memorial to the Air India 747 crash) and onwards through Kilcrohane. I then let Farrell’s directions to visitors to guide me: “ Three miles past Kilcrohane on the road from Durrus, turn right at green shop, over brow of hill, right at a T junction, the fork left at cattle pen and first house on the right (You can tell it by the weeds.) “. Remarkably these directions written in 1979 are still good – the shop is brown-grey not green but everything else fits, and the house is still surrounded by weeds and bushes. Instead of Dunmanus Bay we are now looking out on Bantry Bay. It’s very isolated – I can see only one other house in the distance. The spot appears on no maps and there are no helpful signposts around. Without our book I don’t think we would have found it.

We park nearby and arouse the attention of a pair of collies. The owner comes out to check and we get talking. He’s an ex-trawler hand from Zurich but looks more like an old West Cork hippie – long blonde-grey hair tied in a streaming pony tail. He told us that he moved into the house a year after Farrell’s death and offered the opinion that Farrell liked a party because the garden was festooned with bottles of every shape and hue. Farrell bought the house with his Booker Prize money and used it as a writing retreat. Our old sailor said that his neighbours had various theories about Farrell’s death (assassination, suicide etc.) but he favoured (as I do) the simple one that he slipped and was dragged under.

The little cove where he drowned is about 300 metres down a muddy lane through rocky fields suitable only for sheep. It’s a bleak spot on a grey day. A small plaque on a rock gives the bare facts. Farrell was a very interesting man, rugby player, Oxford smart arse, labourer in the Arctic, polio victim (the experience that turned him into a writer), womaniser, solitary soul, and highly disciplined writer. He died tragically young at 44 but he left behind three of the best historical novels of the past century: The Siege of Krishnapur, Troubles, and The Singapore Grip. 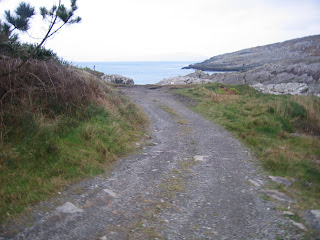