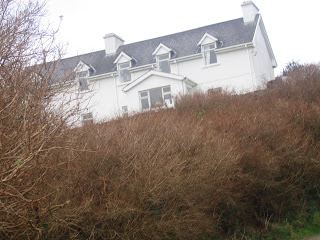 On my annual visit to Schull I eventually track down the site of the murder of Sophie Toscan du Plantier. It’s a godforsaken bleak hillside in Dunmanus West. You turn off the main road between Schull and Goleen, follow a narrow road meandering uphill and then take an even narrower path through rocks and scrub land. You turn a corner and are suddenly confronted by the incongruously large white house with a multitude of windows gazing down accusingly on the spot where the body was found. The site is marked by a simple Celtic cross bedecked with flowers and wreaths (“Sympathy and Prayers from the Kingston Family”).

I am struck by how far the site is from the house – it’s about 150 yards down a winding lane. There are plenty of loose stones and rocks around and a couple of ominous breeze blocks. How dark and lonely a death in this bleak spot.
The whole affair is an indictment of the local gardai. The crime scene was compromised by their failure to preserve it and there was a fatal delay in gathering forensic evidence. I’m surprised that there wasn’t anything gleaned from the victim, but who knows whether she ever got to grips with her assailant. Locals say that the Murderer still walks the streets of Schull. 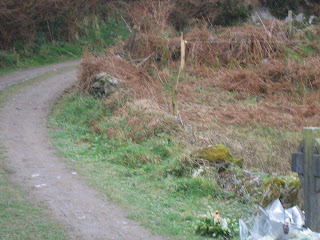