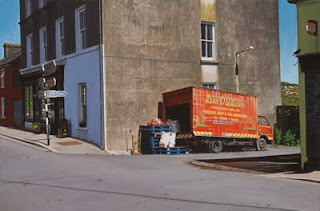 It was good to see a buzzing well-attended opening at the Taylor Galleries - things have been a bit bleak in recent times. I'm wondering if the unusual Friday opening was the reason or, more likely, the popularity of John Doherty's work. I first encountered his work about 16 years ago when he had a show in the Taylor entirely devoted to old characterful petrol pumps - or "bowsers" as they're called in this show - an Australian term I believe. I met him briefly at the time and liked his amiability and lack of preciousness.These days he's still painting old petrol pumps with personality, rusty old buoys and other marine equipment, and, most evocatively, small town shop fronts.The key to John's work is not the photographic precision of the images (which is remarkable) but the choice of subject matter. This is seen best in the desolate streetscapes of small town Ireland: Youghal, Rosscarberry, Ennistymon, Union Hall, Goleen and Carrick-on-Suir are featured in this show. He captures some kind of squalid ennui. You can feel the aridity of the daily round in such places. There are humourous touches amid the bleakness - the dog on a mission in Homeward Bound for example. The marine pieces are the least interesting - they seem lined up for our delectation rather like rusty versions of Liam Belton's cold academic still lifes. It's interesting to see that the prices are maintained at a level close to what prevailed in the boom times - this in stark contrast to what the auction houses are doing.They ranges from €3,500 for 18 x 18 cm pieces to €25,000 for 80 x 122 cms. And on the opening night it was heartening to see that around half of the 24 works had sold.
Posted by Ardmayle at 12:48 PM