This Cultural Week: Paul Theroux, Roger Waters and a Load of Arse 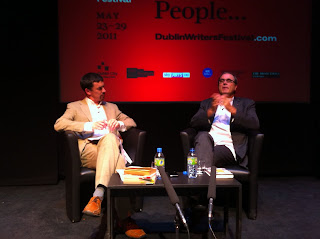 Highlight of the cultural week for me was Paul Theroux’s appearance at a Dublin Writer’s Week event in the Samuel Beckett Theatre in Trinity. This event was only slightly tainted by the self-important prick (Colin Murphy) who introduced him. At one stage this creature corrected Theroux’s use of “twittering” instead of “tweeting” when any normal civilised welcoming person would have let it go. Theroux came across as an amiable cove, comfortable in his own skin and un-phased by the occasional awkward question. He looks younger than his 70 years and I’d say there are a few journeys left in him yet. He spoke very warmly of Dervla Murphy and her method of travelling - go to obscure spots and get among the people. He also spoke warmly of Joyce whom he quoted at length and Chekov. Surprisingly he gave a friendly nod to his old nemesis Naipaul also. He was very adamant that there were no fictional elements in his travel books and was quite critical of Bruce Chatwin for his cavalier attitude in this regard – especially in Songlines.

Roger Waters The Wall in the O2 Theatre on Tuesday was a triumph of stagecraft, design, and general pyrotechnics – however, apart from an epic version of Comfortably Numb the music left me unmoved. We had plane crashes with real flames (I felt the heat), 30 foot monsters, spectacular collapsing walls, and a large pig floating over the audience. The agit prop slogans have been updated to include references to Iraq and Afghanistan and the iPhone and iPod “i” prefixes some of the typographical elements. Waters’ voice is very limited but he was supported by a very competent band and the cracks were well covered. The star of the show for me was the splendidly grotesque graphics by Gerald Scarfe.

A seminar on Art Criticism Now in the LAB seemed like it might be of interest given the limited nature of art criticism in this country. However as soon as David Berridge (doyen of the Wild Pansy Press and creator of various “chapbooks” on art) started talking I knew I was in trouble. I am just not interested in the connection between “experimental poetics and art practice” and the notion of “performant criticism” makes me feel queasy. There was no grist for the mill of my mind in all this – it slip slid away. Berridge’s gratuitous esotericisms were followed by an interview between Caoimhin MacGiolla Leith and the performance artist Amanda Coogan. This started out by CMGL apologizing to his right on audience for the many conventional pieces of art criticism he has done to order – presumably a reference to those Tony O’Malley pieces he did for the IMMA catalogue. He spent a lengthy period establishing his credentials (the Tate got mentioned a few times) before he began his discussion with the bould Coogan – whose well-known breasts were peeping becomingly out her dress. Any attempt at talking high-flown arse by CMGL was met with a straight bat by the commonsensical Coogan. She maintained that whether it was review or academic criticism she welcomed it all as valuable PR. She spoke of gaining acceptance by the Boston Museum of Art recently based on the volume of reviews she was able to bring along to the interview. An amusing side show to this encounter was their differing pronunciation of “ephemeral”. Cooogan favoured a long second “e” while CMGL went for a short one. And it should be noted that this word got used umpteen times.
Posted by Ardmayle at 11:44 AM