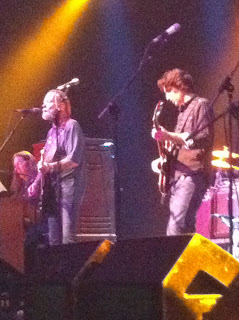 It's a real pleasure to see an uncomplicated shit-kicking rock band at the top of their game. Gregg Allman and his merry men delivered a high-octane blues-tinted gig at Vicar Street last Monday - to an audience as grizzled as the main man. Allman has one of the sweetest voices in rock and one of the ugliest faces. Time, heroin, coke and alcohol (and a recent liver transplant) have not diminished his talent. And he still has that amazing head of air, mostly in a lengthy pony-tail but occasionally let fly free. He has surrounded himself with a wonderful band. His late lamented brother Duane is covered by a young gun slinger on slide guitar; some mad Jewish freak does piano and organ and there's a tall cerebral sax player and the mandatory uber cool bass guy. Behind them there are two and sometimes three drummers - or more accurately one drummer and two percussionists. They do some standards, some Dylan and a lot from Greg's "Low Country Blues" album. Highlights are "I Can't be Satisified", "Just Like a Woman" and "Sweet Melissa" - but it's all good stuff.

I haven't seen a production of Brian Friel's "Translations" since Liam Neeson was an aspiring young actor. This recent production in the Abbey was a lighter, sunnier production but you were always aware of the dark stuff (the Donnelly brothers and the potato famine) hanging in the air - a distant cloud in Arcadia. I always enjoy the tension in the theatre and admire the discipline of professional actors - as a bad amateur one in my time I have some inkling of what it takes. Some creep called Crawley in the Irish Times gave this production a dubious review making a slighting reference to Oklahoma. Cheap shot. I found it zipped along and if at times there was a bucolic feel to some of the scenes it was only to mark the contrast to the looming darkness. And the audience lapped it up.

I can take abstraction in art as well as the next man. In fact I'd consider the rigorously abstract Charlie Tyrrell one of my favourite contemporary Irish artists. And I'll bow to no one in my admiration for the likes of Scully and Rothko. However I just do not get Katherine Boucher Beug - who's currently showing in the estimable Oliver Sears Gallery. I loved her recent piece in the RHA but my encounter with her work en masse has not worked for me. Better judges than me seem to rate her very highly but you can't hurry love and I'm just not convinced. I pick up hints of Scully but I also pick up a dispiriting whiff of John Noel Smith. And while I may with time and effort come around to her symphonies of stripes I will never reconcile myself to the small twee 3-D wooden tables that accompany some of the work. Heaven forfend.
Posted by Ardmayle at 7:02 PM